Musician Pleads No Contest To Assault 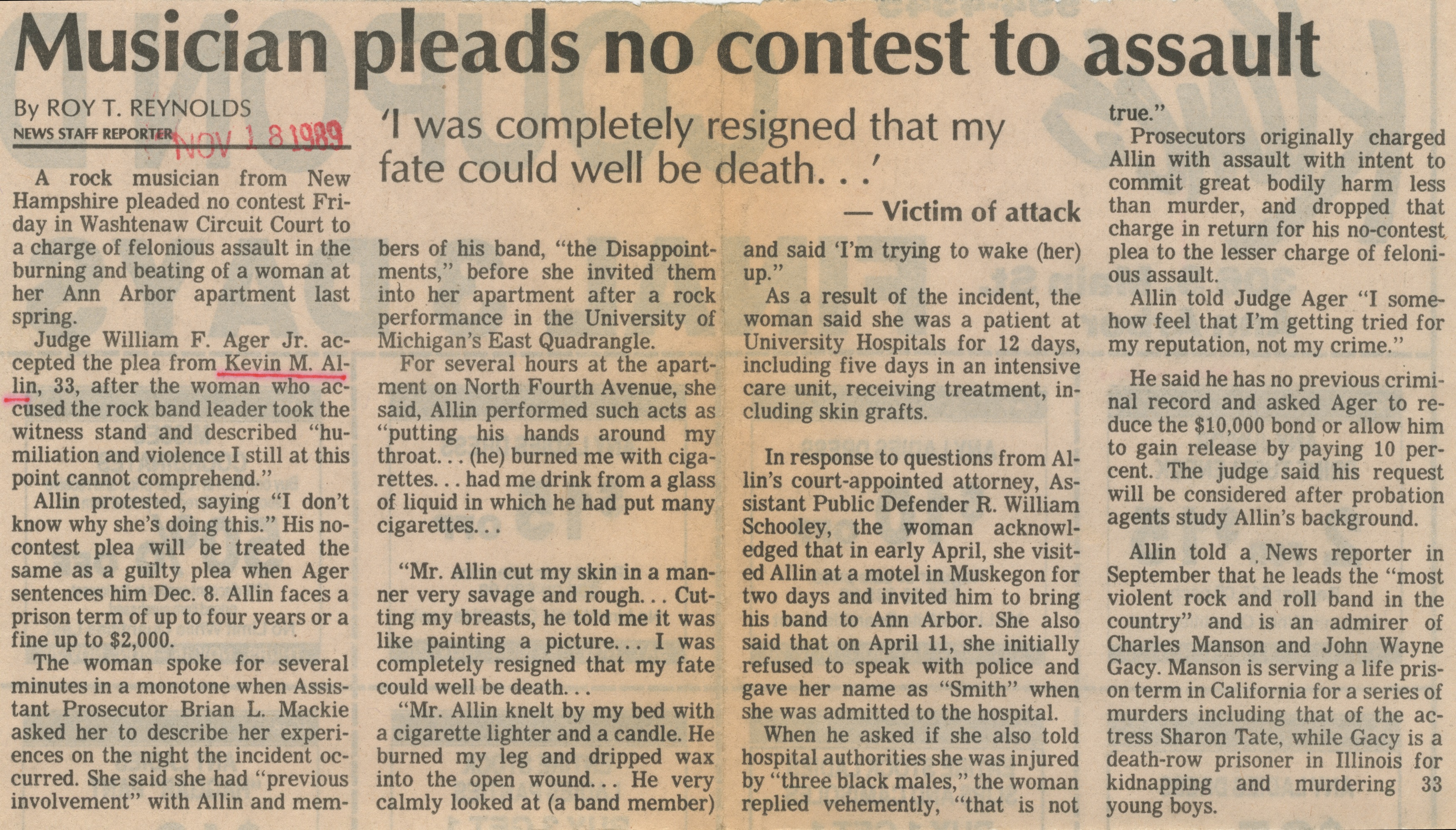 ﻿Musician pleads no contest to assault

'I was completely resigned that my fate could well be death...'

A rock musician from New Hampshire pleaded no contest Friday in Washtenaw Circuit Court to a charge of felonious assault in the burning and beating of a woman at her Ann Arbor apartment last spring.

Judge William F. Ager Jr. accepted the plea from Kevin M. Allin, 33, after the woman who accused the rock band leader took the witness stand and described “humiliation and violence I still at this point cannot comprehend.”

Allin protested, saying “I don’t know why she’s doing this.” His no-contest plea will be treated the same as a guilty plea when Ager sentences him Dec. 8. Allin faces a prison term of up to four years or a fine up to $2,000.

The woman spoke for several minutes in a monotone when Assistant Prosecutor Brian L. Mackie asked her to describe her experiences on the night the incident occurred. She said she had “previous involvement” with Allin and members of his band, “the Disappointments,” before she invited them into her apartment after a rock performance in the University of Michigan’s East Quadrangle.

For several hours at the apartment on North Fourth Avenue, she said, Allin performed such acts as “putting his hands around my throat... (he) burned me with cigarettes. .. had me drink from a glass of liquid in which he had put many cigarettes...

“Mr. Allin cut my skin in a manner very savage and rough... Cutting my breasts, he told me it was like painting a picture... I was completely resigned that my fate could well be death...

"Mr. Allin knelt by my bed with a cigarette lighter and a candle. He burned my leg and dripped wax into the open wound... He very calmly looked at (a band member) and said ‘I’m trying to wake (her) up.”

As a result of the incident, the woman said she was a patient at University Hospitals for 12 days, including five days in an intensive care unit, receiving treatment, including skin grafts.

In response to questions from Allin’s court-appointed attorney, Assistant Public Defender R. William Schooley, the woman acknowledged that in early April, she visited Allin at a motel in Muskegon for two days and invited him to bring his band to Ann Arbor. She also said that on April 11, she initially refused to speak with police and gave her name as “Smith” when she was admitted to the hospital.

When he asked if she also told hospital authorities she was injured by “three black males,” the woman replied vehemently, “that is not true.”

Prosecutors originally charged Allin with assault with intent to commit great bodily harm less than murder, and dropped that charge in return for his no-contest plea to the lesser charge of felonious assault.

Allin told Judge Ager “I somehow feel that I’m getting tried for my reputation, not my crime.”

He said he has no previous criminal record and asked Ager to reduce the $10,000 bond or allow him to gain release by paying 10 percent. The judge said his request will be considered after probation agents study Allin’s background.

Allin told a, News reporter in September that he leads the “most violent rock and roll band in the country” and is an admirer of Charles Manson and John Wayne Gacy. Manson is serving a life prison term in California for a series of murders including that of the actress Sharon Tate, while Gacy is a death-row prisoner in Illinois for kidnapping and murdering 33 young boys.