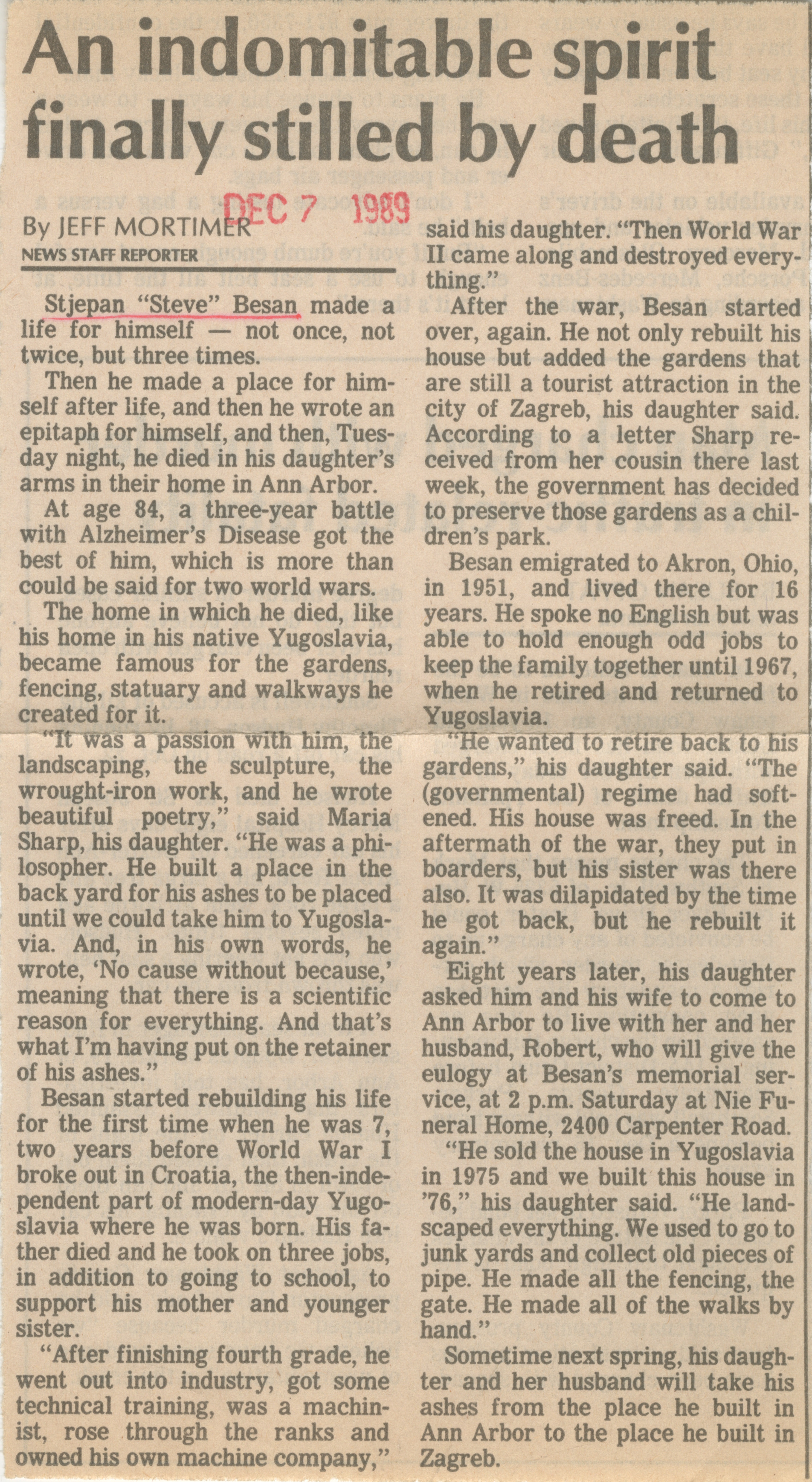 Stjepan "Steve" Besan made a life for himself - not once, not twice, but three times.

Then he made a place for himself after life, and then he wrote an epitaph for himself, and then, Tuesday night, he died in his daughter's arms in their home in Ann Arbor.

At age 84, a three-year battle with Alzheimer's Disease got the best of him, which is more than could be said for two world wars.

The home in which he died, like his home in native Yugoslavia, became famous for the gardens, fencing, statuary and walkways he created for it.

"It was a passion with him, the landscaping, the sculpture, the wrought-iron work, and he wrote beautiful poetry," said Maria Sharp, his daughter. "He was a philosopher. He built a place in the back yard for his ashes to be placed until we could take him to Yugoslavia. And, in his own words, he wrote, 'No cause without because,' meaning that there is a scientific reason for everything. And that's what I'm having put on the retainer of his ashes."

Besan started rebuilding his life for the first time when he was 7, two years before World War I broke out in Croatia, the then-independent part of modern-day Yugoslavia where he was born. His father died and he took on three jobs, in addition to going to school, to support his mother and younger sister.

"After finishing fourth grade, he went out into industry, got some technical training, he was a machinist, rose through the ranks and owned his own machine company," said his daughter. "Then World War II came along and destroyed everything."

After the war, Besan started over, again. He not only rebuilt his house but added the gardens that are still a tourist attraction in the city of Zagreb, his daughter said. According to a letter from Sharp received from her cousin there last week, the government has decided to preserve those gardens as a children's park.

Besan emigrated to Akron, Ohio, in 1951, and lived there for 16 years. He spoke no English but was able to hold enough odd jobs to keep the family together until 1967, when he retired and returned to Yugoslavia.

"He wanted to retire back to his gardens," his daughter said. "The (governmental) regime had softened. His house was freed. In the aftermath of the war, they put in boarders, but his sister was there also. It was dilapidated by the time he got back, but he rebuilt it again."

Eight years later, his daughter asked him and his wife to come to Ann Arbor to live with her and her husband, Robert, who will give the eulogy at Besan's memorial service, at 2 p.m. Saturday at Nie Funeral Home, 2400 Carpenter Road.

"He sold the house in Yugoslavia in 1975 and we built this house in '76," his daughter said. "He landscaped everything. We used to go to junk yards and collect old pieces of pipe. He made all the fencing, the gate. He made all of the walks by hand."