Modern-Day Johnny Appleseed Has His Roots In Conservation 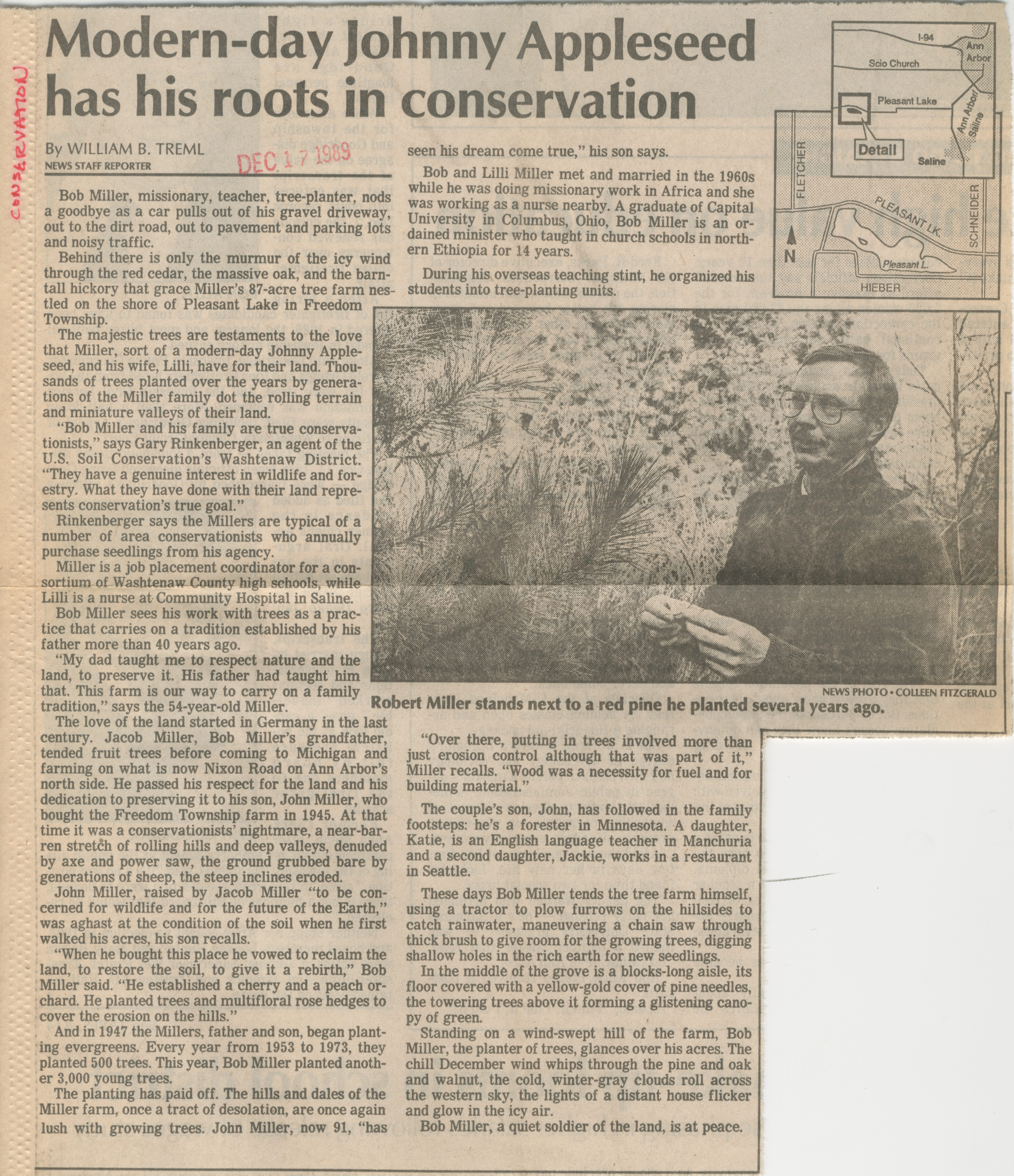 Modern-day johnny Appleseed has his roots in conservation

Bob Miller, missionary, teacher, tree-planter, nods a goodbye as a car pulls out of his gravel driveway, out to the dirt road, out to pavement and parking lots and noisy traffic.

Behind there is only the murmur of the icy wind through the red cedar, the massive oak, and the barn-tall hickory that grace Miller’s 87-acre tree farm nestled on the shore of Pleasant Lake in Freedom Township.

The majestic trees are testaments to the love that Miller, sort of a modern-day Johnny Appleseed, and his wife, Lilli, have for their land. Thousands of trees planted over the years by generations of the Miller family dot the rolling terrain and miniature valleys of their land.

“Bob Miller and his family are true conservationists,” says Gary Rinkenberger, an agent of the U.S. Soil Conservation’s Washtenaw District. “They have a genuine interest in wildlife and forestry. What they have done with their land represents conservation’s true goal.”

Rinkenberger says the Millers are typical of a number of area conservationists who annually purchase seedlings from his agency.

Miller is a job placement coordinator for a consortium of Washtenaw County high schools, while Lilli is a nurse at Community Hospital in Saline.

Bob Miller sees his work with trees as a practice that carries on a tradition established by his father more than 40 years ago.

“My dad taught me to respect nature and the land, to preserve it. His father had taught him that. This farm is our way to carry on a family tradition,” says the 54-year-old Miller.

The love of the land started in Germany in the last century. Jacob Miller, Bob Miller’s grandfather, tended fruit trees before coming to Michigan and farming on what is now Nixon Road on Ann Arbor’s north side. He passed his respect for the land and his dedication to preserving it to his son, John Miller, who bought the Freedom Township farm in 1945. At that time it was a conservationists’ nightmare, a near-barren stretch of rolling hills and deep valleys, denuded by axe and power saw, the ground grubbed bare by generations of sheep, the steep inclines eroded.

John Miller, raised by Jacob Miller “to be concerned for wildlife and for the future of the Earth,” was aghast at the condition of the Soil when he first walked his acres, his son recalls.

“When he bought this place he vowed to reclaim the land, to restore the soil, to give it a rebirth,” Bob Miller said. “He established a cherry and a peach orchard. He planted trees and multifloral rose hedges to cover the erosion on the hills.”

The planting has paid off. The hills and dales of the Miller farm, once a tract of desolation, are once again lush with growing trees. John Miller, now 91, “has seen his dream come true,” his son says.

Bob and Lilli Miller met and married in the 1960s while he was doing missionary work in Africa and she was working as a nurse nearby. A graduate of Capital University in Columbus, Ohio, Bob Miller is an ordained minister who taught in church schools in northern Ethiopia for 14 years.

During his overseas teaching stint, he organized his students into tree-planting units.

“Over there, putting in trees involved more than just erosion control although that was part of it,” Miller recalls. “Wood was a necessity for fuel and for building material.”

The couple’s son, John, has followed in the family footsteps: he’s a forester in Minnesota. A daughter, Katie, is an English language teacher in Manchuria and a second daughter, Jackie, works in a restaurant in Seattle.

These days Bob Miller tends the tree farm himself, using a tractor to plow furrows on the hillsides to catch rainwater, maneuvering a chain saw through thick brush to give room for the growing trees, digging shallow holes in the rich earth for new seedlings.

In the middle of the grove is a blocks-long aisle, its floor covered with a yellow-gold cover of pine needles, the towering trees above it forming a glistening canopy of green.

Standing on a wind-swept hill of the farm, Bob Miller, the planter of trees, glances over his acres. The chill December wind whips through the pine and oak and walnut, the cold, winter-gray clouds roll across the western sky, the lights of a distant house flicker and glow in the icy air.

Bob Miller, a quiet soldier of the land, is at peace.

Robert Miller stands next to a red pine he planted several years ago.