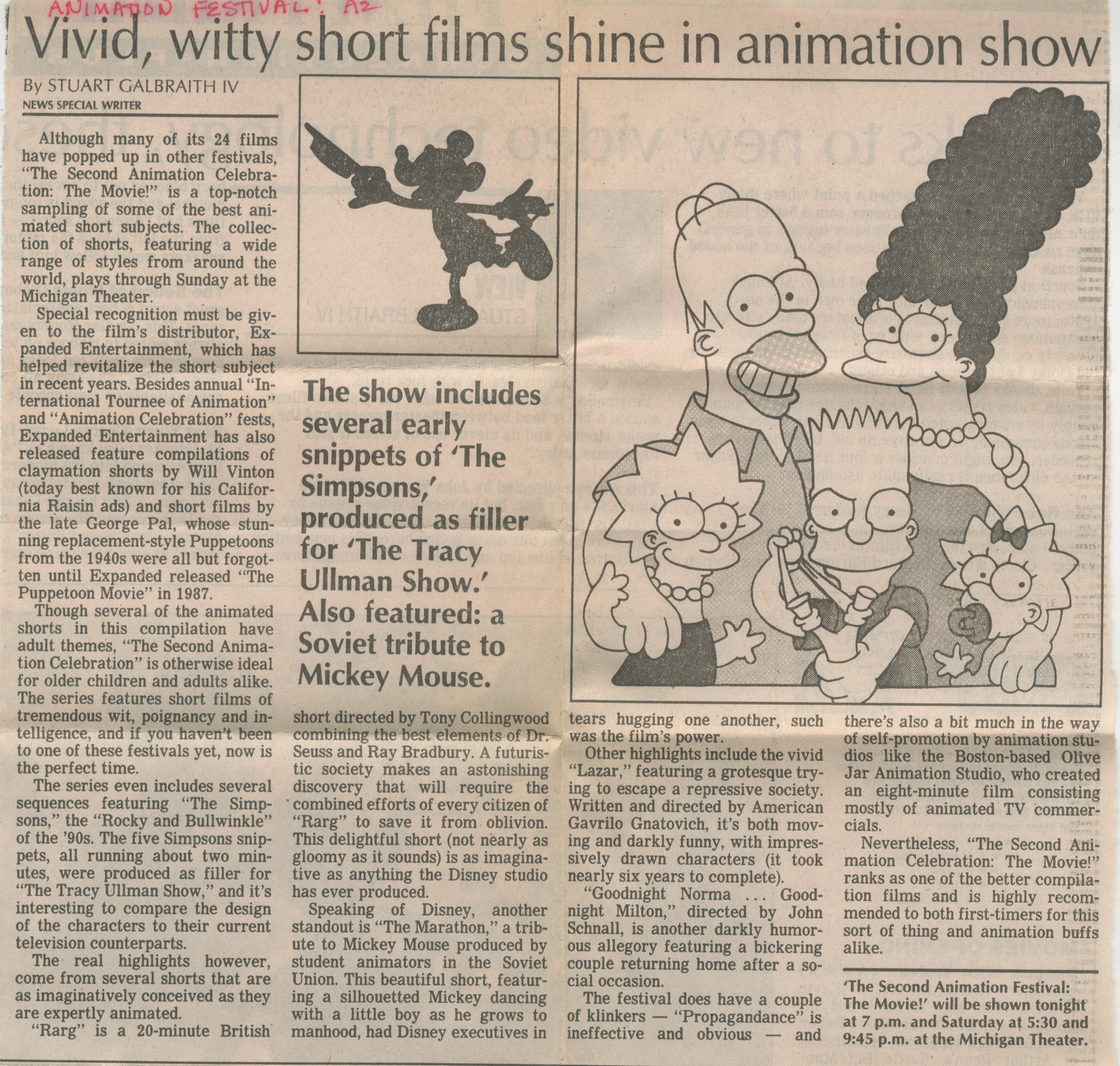 The show includes several early snippets of 'The Simpsons,' produced as filler for 'The Tracy Ullman Show.'

Although many of its 24 films have popped up in other festivals, “The Second Animation Celebration: The Movie!” is a top-notch sampling of some of the best animated short subjects. The collection of shorts, featuring a wide range of styles from around the world, plays through Sunday at the Michigan Theater.

Special recognition must be given to the film’s distributor, Expanded Entertainment, which has helped revitalize the short subject in recent years. Besides annual “International Tournee of Animation” and “Animation Celebration” fests, Expanded Entertainment has also released feature compilations of claymation shorts by Will Vinton (today best known for his California Raisin ads) and short films by the late George Pal, whose stunning replacement-style Puppetoons from the 1940s were all but forgotten until Expanded released “The Puppetoon Movie” in 1987.

Though several of the animated shorts in this compilation have adult themes, “The Second Animation Celebration” is otherwise ideal for older children and adults alike. The series features short films of tremendous wit, poignancy and intelligence, and if you haven’t been to one of these festivals yet, now is the perfect time.

The series even includes several sequences featuring “The Simpsons,” the “Rocky and Bullwinkle” of the ’90s. The five Simpsons snippets, all running about two minutes, were produced as filler for “The Tracy Ullman Show,” and it’s interesting to compare the design of the characters to their current television counterparts.

The real highlights however, come from several shorts that are as imaginatively conceived as they are expertly animated.

“Rarg” is a 20-minute British short directed by Tony Collingwood combining the best elements of Dr. Seuss and Ray Bradbury. A futuristic society makes an astonishing discovery that will require the combined efforts of every citizen of “Rarg” to save it from oblivion. This delightful short (not nearly as gloomy as it sounds) is as imaginative as anything the Disney studio has ever produced.

Speaking of Disney, another standout is “The Marathon,” a tribute to Mickey Mouse produced by student animators in the Soviet Union. This beautiful short, featuring a silhouetted Mickey dancing with a little boy as he grows to manhood, had Disney executives in tears hugging one another, such was the film’s power.

Other highlights include the vivid “Lazar,” featuring a grotesque trying to escape a repressive society. Written and directed by American Gavrilo Gnatovich, it’s both moving and darkly funny, with impressively drawn characters (it took nearly six years to complete).

The festival does have a couple of klinkers — “Propagandance” is ineffective and obvious — and there’s also a bit much in the way of self-promotion by animation studios like the Boston-based Olive Jar Animation Studio, who created an eight-minute film consisting mostly of animated TV commercials.

Nevertheless, “The Second Animation Celebration: The Movie!” ranks as one of the better compilation films and is highly recommended to both first-timers for this sort of thing and animation buffs alike.