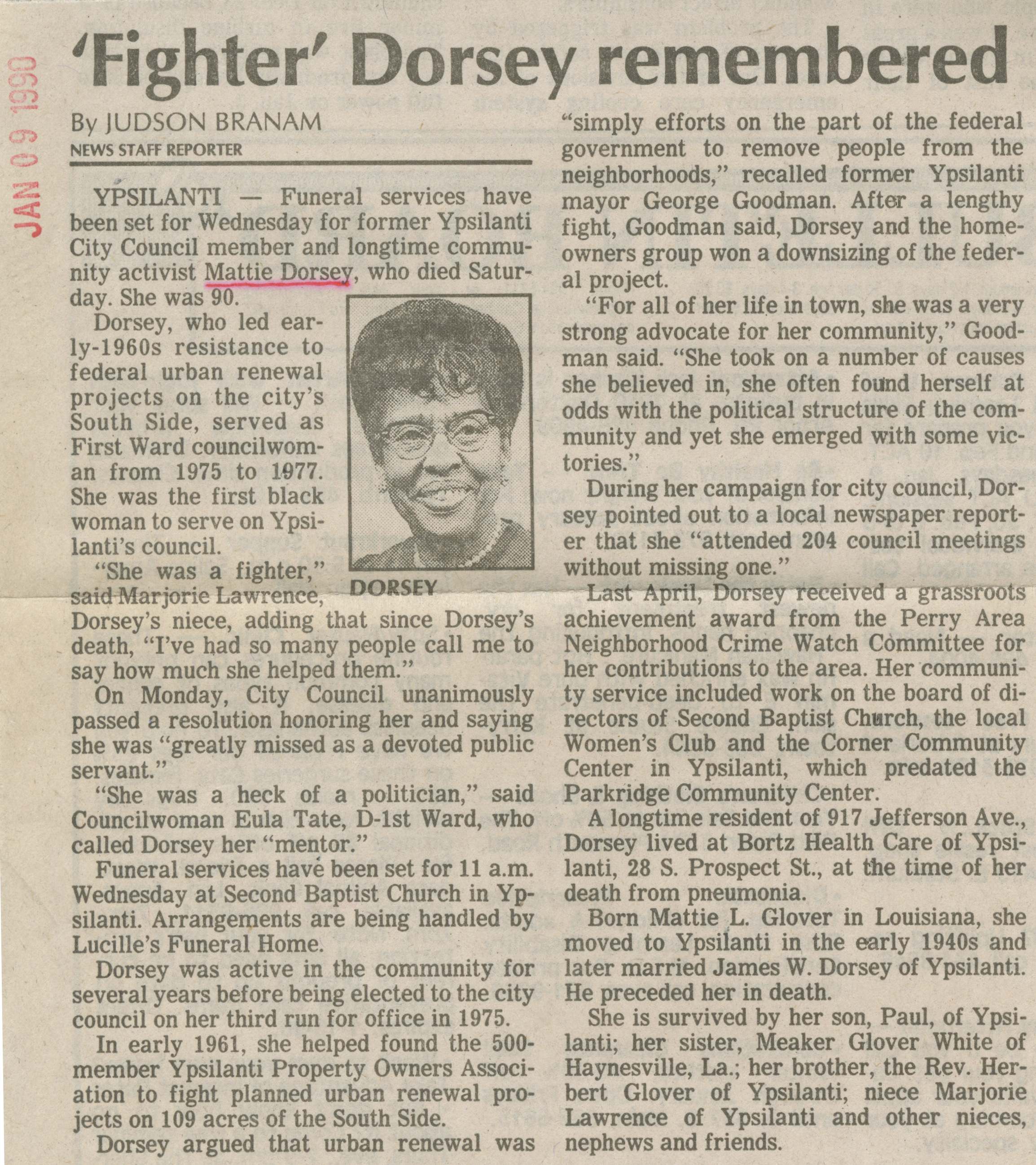 YPSILANTI - Funeral services have been set for Wednesday for former Ypsilanti City Council member and longtime community activist Mattie Dorsey, who died Saturday. She was 90.
Dorsey, who led early-1960s resistance to federal urban renewal projects on the city's South Side, served as First Ward councilwoman from 1975 to 1977. She was the first black woman to serve on Ypsilanti's council.
"She was a fighter,” said Marjorie Lawrence, Dorsey's niece, adding that since Dorsey's death, “I've had so many people call me to say how much she helped them.”
On Monday, City Council unanimously passed a resolution honoring her and saying she was "greatly missed as a devoted public servant.”
"She was a heck of a politician,” said Councilwoman Eula Tate, D-1st Ward, who called Dorsey her "mentor.”
Funeral services have been set for 11 a.m. Wednesday at Second Baptist Church in Ypsilanti. Arrangements are being handled by Lucille's Funeral Home.
Dorsey was active in the community for several years before being elected to the city council on her third run for office in 1975.
In early 1961, she helped found the 500member Ypsilanti Property Owners Association to fight planned urban renewal projects on 109 acres of the South Side.
Dorsey argued that urban renewal was "simply efforts on the part of the federal government to remove people from the neighborhoods,” recalled former Ypsilanti mayor George Goodman. After a lengthy fight, Goodman said, Dorsey and the homeowners group won a downsizing of the federal project.
"For all of her life in town, she was a very strong advocate for her community,” Goodman said. “She took on a number of causes she believed in, she often found herself at odds with the political structure of the community and yet she emerged with some victories.”
During her campaign for city council, Dorsey pointed out to a local newspaper reporter that she "attended 204 council meetings without missing one."
Last April, Dorsey received a grassroots achievement award from the Perry Area Neighborhood Crime Watch Committee for her contributions to the area. Her community service included work on the board of directors of Second Baptist Church, the local Women's Club and the Corner Community Center in Ypsilanti, which predated the Parkridge Community Center.
A longtime resident of 917 Jefferson Ave.. Dorsey lived at Bortz Health Care of Ypsilanti, 28 S. Prospect St., at the time of her death from pneumonia.
Born Mattie L. Glover in Louisiana, she moved to Ypsilanti in the early 1940s and later married James W. Dorsey of Ypsilanti. He preceded her in death.
She is survived by her son, Paul, of Ypsilanti; her sister, Meaker Glover White of Haynesville, La.; her brother, the Rev. Herbert Glover of Ypsilanti; niece Marjorie Lawrence of Ypsilanti and other nieces, nephews and friends.