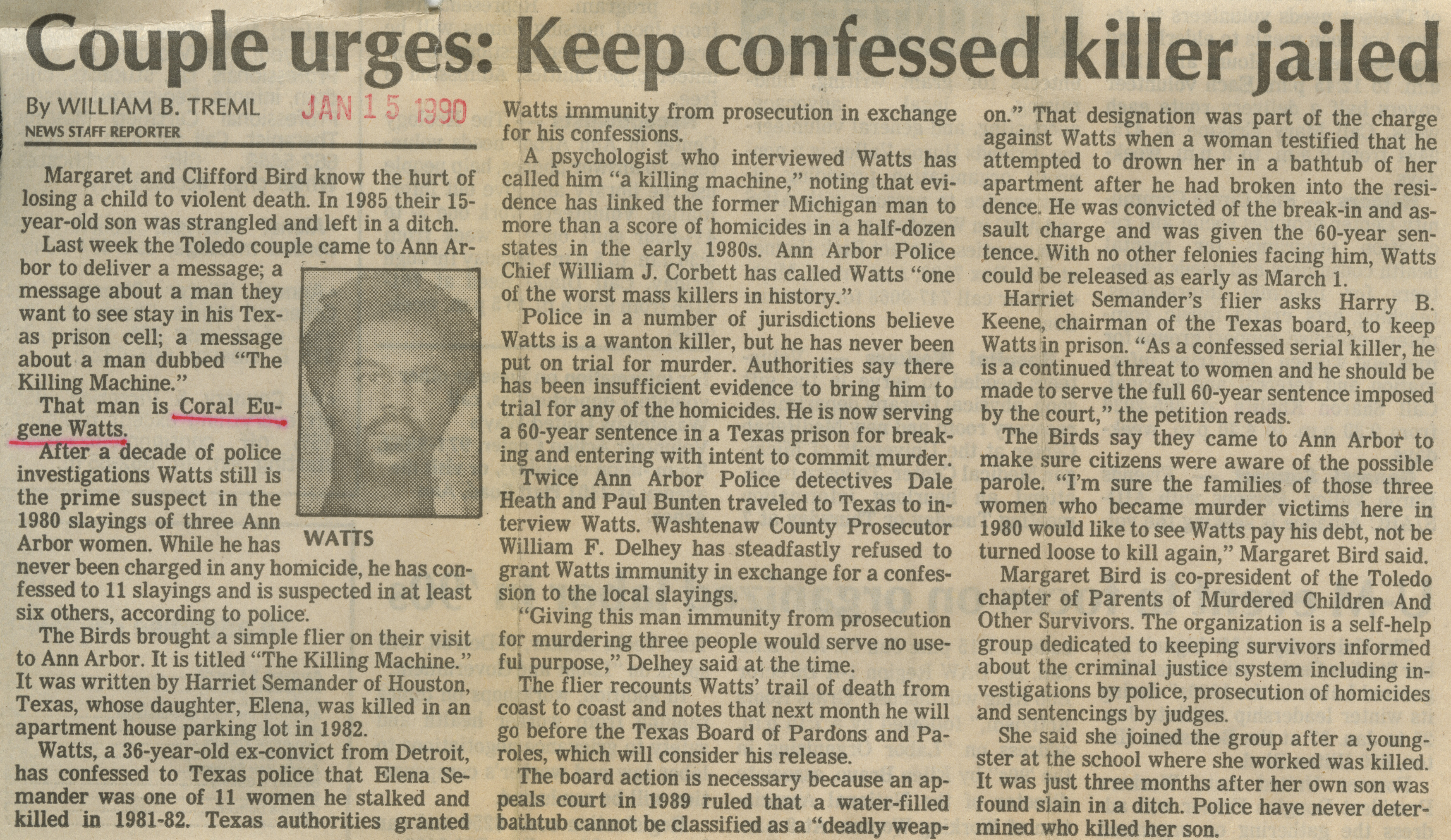 That man is Coral Eugene Watts.

After a decade of police investigations Watts still is the prime suspect in the 1980 slayings of three Ann Arbor women. While he has never been charged in any homicide, he has confessed to 11 slayings and is suspected in at least six others, according to police.

The Birds brought a simple flier on their visit to Ann Arbor. It is titled “The Killing Machine.” It was written by Harriet Semander of Houston, Texas, whose daughter, Elena, was killed in an apartment house parking lot in 1982.

Watts, a 36-year-old ex-convict from Detroit, has confessed to Texas police that Elena Semander was one of 11 women he stalked and killed in 1981-82. Texas authorities granted Watts immunity from prosecution in exchange for his confessions.

A psychologist who interviewed Watts has called him “a killing machine,” noting that evidence has linked the former Michigan man to more than a score of homicides in a half-dozen states in the early 1980s. Ann Arbor Police Chief William J. Corbett has called Watts “one of the worst mass killers in history.”

Police in a number of jurisdictions believe Watts is a wanton killer, but he has never been put on trial for murder. Authorities say there has been insufficient evidence to bring him to trial for any of the homicides. He is now serving a 60-year sentence in a Texas prison for breaking and entering with intent to commit murder.

“Giving this man immunity from prosecution for murdering three people would serve no useful purpose,” Delhey said at the time.

The flier recounts Watts’ trail of death from coast to coast and notes that next month he will go before the Texas Board of Pardons and Paroles, which will consider his release.

The board action is necessary because an appeals court in 1989 ruled that a water-filled bathtub cannot be classified as a “deadly weapon.” That designation was part of the charge against Watts when a woman testified that he attempted to drown her in a bathtub of her apartment after he had broken into the residence. He was convicted of the break-in and assault charge and was given the 60-year sentence. With no other felonies facing him, Watts could be released as early as March 1.

Harriet Semander’s flier asks Harry B. Keene, chairman of the Texas board, to keep Watts in prison. “As a confessed serial killer, he is a continued threat to women and he should be made to serve the full 60-year sentence imposed by the court,” the petition reads.

The Birds say they came to Ann Arbor to make sure citizens were aware of the possible parole. “I’m sure the families of those three women who became murder victims here in 1980 would like to see Watts pay his debt, not be turned loose to kill again,” Margaret Bird said.

Margaret Bird is co-president of the Toledo chapter of Parents of Murdered Children And Other Survivors. The organization is a self-help group dedicated to keeping survivors informed about the criminal justice system including investigations by police, prosecution of homicides and sentencings by judges.

She said she joined the group after a youngster at the school where she worked was killed. It was just three months after her own son was found slain in a ditch. Police have never determined who killed her son.