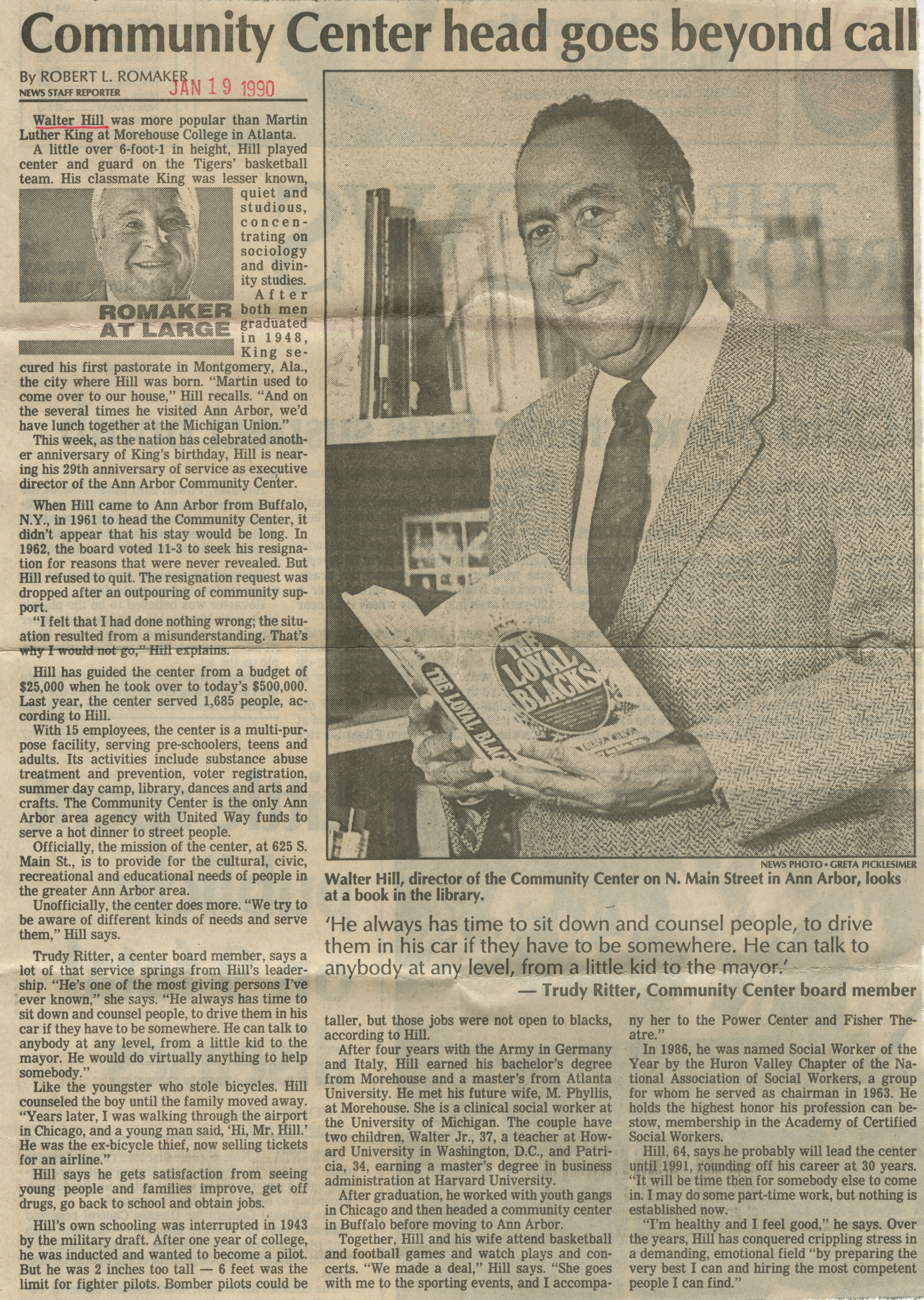 A little over 6-foot-1 in height, Hill played center and guard on the Tigers' basketball team. His classmate King was lesser known, quiet and studious, concentrating on sociology and divinity studies.

After both men graduated in 1948, King secured his first pastorate in Montgomery, Ala., the city where Hill was born. "Martin used to come over to our house," Hill recalls. "And on the several times he visited Ann Arbor, we'd have lunch together at the Michigan Union."

This week, as the nation has celebrated another anniversary of King's birthday, Hill is nearing his 29th anniversary of service as executive director of the Ann Arbor Community Center.

When Hill came to Ann Arbor from Buffalo N.Y., in 1961 to head the Community Center, it didn't appear that his stay would be long. In 1962, the board voted 11-3 to seek his resignation for reasons that were never revealed. But Hill refused to quit. The resignation request dropped after an outpouring of community support.

"I felt that I had done nothing wrong; the situation resulted from a misunderstanding. That's why I would not go," Hill explains.

With 15 employees, the center is a multi-purpose facility, serving pre-schoolers, teens and adults. Its activities include substance abuse treatment and prevention, voter registration, summer day camp, library, dances and arts and crafts. The Community Center is the only Ann Arbor area agency with United Way funds to serve a hot dinner to street people.

Officially, the mission of the center, at 625 S. Main St., is to provide for the cultural, civic, recreational and educational needs of people in the greater Ann Arbor area.

Unofficially, the center does more. "We try to be aware of different kinds of needs and serve them," Hill says.

Trudy Ritter, a center board member, says a lot of that service springs from Hill's leadership. "He's one of the most giving persons I've ever known," she says. "He always has time to sit down and counsel people, to drive them in his car if they have to be somewhere. He can talk to anybody at any level, from a little kid to the mayor. He would do virtually anything to help somebody."

Like the youngster who stole bicycles. Hill counseled the boy until the family moved away. "Years later, I was walking through the airport in Chicago, and a young man said, 'Hi, Mr. Hill.' He was the ex-bicycle thief, now selling tickets for an airline."

Hill says he gets satisfaction from seeing young people and families improve, get off drugs, go back to school and obtain jobs.

Hill's own schooling was interrupted in 1943 by the military draft. After one year of college, he was inducted and wanted to become a pilot. But he was 2 inches too tall - 6 feet was the limit for fighter pilots. Bomber pilots could be taller, but those jobs were not open to blacks, according to Hill.

After four years with the Army in Germany and Italy, hill earned his bachelor's degree from Morehouse and a master's from Atlanta University. He met his future wife, M. Phyllis, at Morehouse. She is a clinical social worker at the University of Michigan. The couple have two children, Walter Jr., 37, a teacher at Howard University in in Washington, D.C., and Patricia, 34, earning a master's degree in business administration at Harvard University.

After graduation, he worked with youth gangs in Chicago and then headed a community center in Buffalo before moving to Ann Arbor.

Together, Hill and his wife attend basketball and football games and watch plays and concerts. "We made a deal," Hill says. "She goes with me to the sporting events, and I accompany her to the Power Center and Fisher Theatre."

In 1986, he was named Social Worker of the Year by the Huron Valley Chapter of the National Association of Social Workers, a group for whom he served as chairman in 1963. He holds the highest honor his profession can bestow, membership in the Academy of Certified Social Workers.

Hill, 64, says he probably will lead the center until 1991, rounding off his career at 30 years. "It will be time t hen for somebody else to come in. I may do some part-time work, but nothing is established now.

"I'm healthy and I feel good," he says. Over the years, Hill has conquered crippling stress in a demanding, emotional field "by preparing the very best I can and hiring the most competent people I can find."

Waller Hill, director of the Community Center on N. Main Street in Ann Arbor, looks at a book in the library.

'He always has time to sit down and counsel people, to drive them in his car if they have to be somewhere. He can talk to anybody at any level, from a little kid to the mayor.'