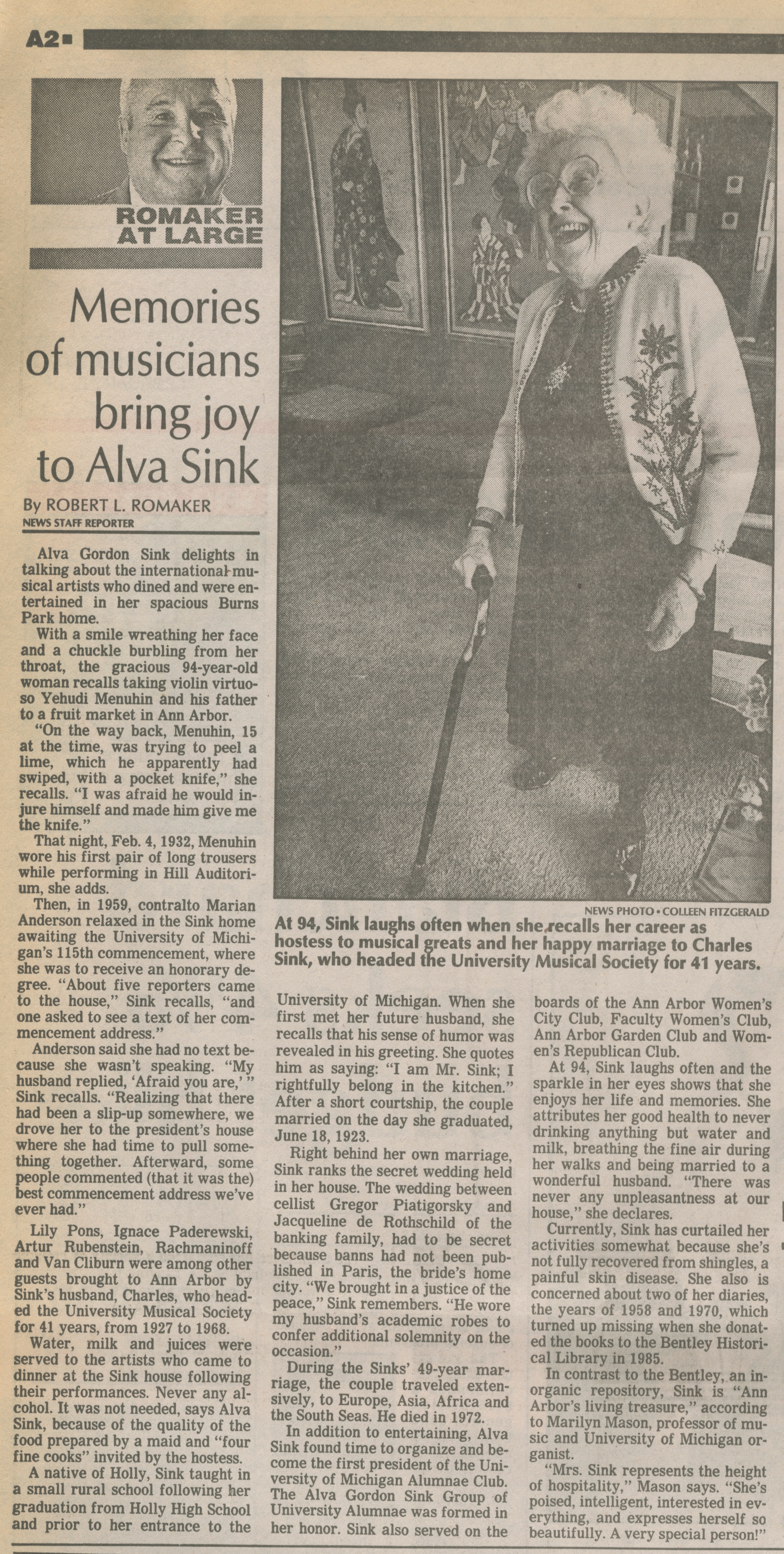 Memories of Musicians Bring Joy to Alva Sink
By Robert L. Romaker
News Staff Reporter
[Caption] At 94, Sink laughs often when she recalls her career as hostess to musical greats and her happy marriage to Charles Sink, who headed the University Musical Society for 41 years.

Alva Gordon Sink delights in talking about the international musical artists who dined and were entertained in her spacious Burns Park home.
With a smile wreathing her face and a chuckle burbling from her throat, the gracious 94-year-old woman recalls taking violin virtuoso Yehudi Menuhin and his father to a fruit market in Ann Arbor.
“On the way back, Menuhin, 15 at the time, was trying to peel a line, which he apparently had swiped, with a pocket knife,” she recalls. “I was afraid he would injure himself and made him give me the knife.”
That night, Feb. 4, 1932, Menuhin wore his first pair of long trousers while performing in Hill Auditorium, she adds.
Then, in 1959, contralto Marian Anderson relaxed in the Sink home awaiting the University of Michigan’s 115th commencement, where she was to receive an honorary degree. “About five reporters came to the house,” Sink recalls, “and one asked to see a text of her commencement address.”
Anderson said she had no text because she wasn’t speaking. “My husband replied, ‘Afraid you are,’” Sink recalls. “Realizing that there had been a slip-up somewhere, we drove her to the president’s house where she had time to pull something together. Afterward, some people commented (that it was the) best commencement address we’ve ever had.”
Lily Pons, Ignace Paderwski, Artur Rubenstein, Rachmaninoff and Van Cliburn were among other guests brought to Ann Arbor by Sink’s husband, Charles, who headed the University Musical Society for 41 years, from 1927 to 1968.
Water, milk and juices were served to the artists who came to dinner at the Sink house following their performances. Never any alcohol. It was not needed, says Alva Sink, because of the quality of the food prepared by a maid and “four fine cooks” invited by the hostess.
A native of Holly, Sink taught in a small rural school following her graduation from Holly High School and prior to her entrance to the University of Michigan. When she first met her future husband, she recalls that his sense of humor was revealed in his greeting. She quotes him as saying: “I am Mr. Sink; I rightfully belong in the kitchen.” After a short courtship, the couple married on the day she graduate, June 18, 1923.
Right behind her own marriage, Sink ranks the secret wedding held in her house. The wedding between cellist Gregor Piatigorsky and Jacqueline de Rothschild of the banking family, had to be secret because banns had not been published in Paris, the bride’s home city. “We brought in a justice of the peace,” Sink remembers. “He wore my husband’s academic robes to confer additional solemnity on the occasion.”
During the Sinks’ 49-year marriage, the couple traveled extensively, to Europe, Asia, Africa and the South Seas. He died in 1972.
In addition to entertaining, Alva Sink found time to organize and become the first president of the University of Michigan Alumnae Club. The Alva Gordon Sink Group of University Alumnae was formed in her honor. Sink also served on the boards of the Ann Arbor Women’s City Club, Faculty Women’s Club, Ann Arbor Garden Club and Women’s Republican Club.
At 94, Sink laughs often and the sparkle in her eyes shows that she enjoys her life and memories. She attributes her good health to never drinking anything but water and milk, breathing the fine air during her walks and being married to a wonderful husband. “There was never any unpleasantness at our house,” she declares.
Currently, Sink has curtailed her activities somewhat because she’s not fully recovered from shingles, a painful skin disease. She also is concerned about two of her diaries the years of 1958 and 1970, which turned up missing when she donated the books to the Bentley Historical Library in 1985.
In contrast to the Bentley, an inorganic repository, Sink is “Ann Arbor’s living treasure,” according to Marilyn Mason, professor of music and University of Michigan organist.
“Mrs. Sink represents the height of hospitality,” Mason says. “She’s poised, intelligent, interested in everything, and expresses herself so beautifully. A very special person!”