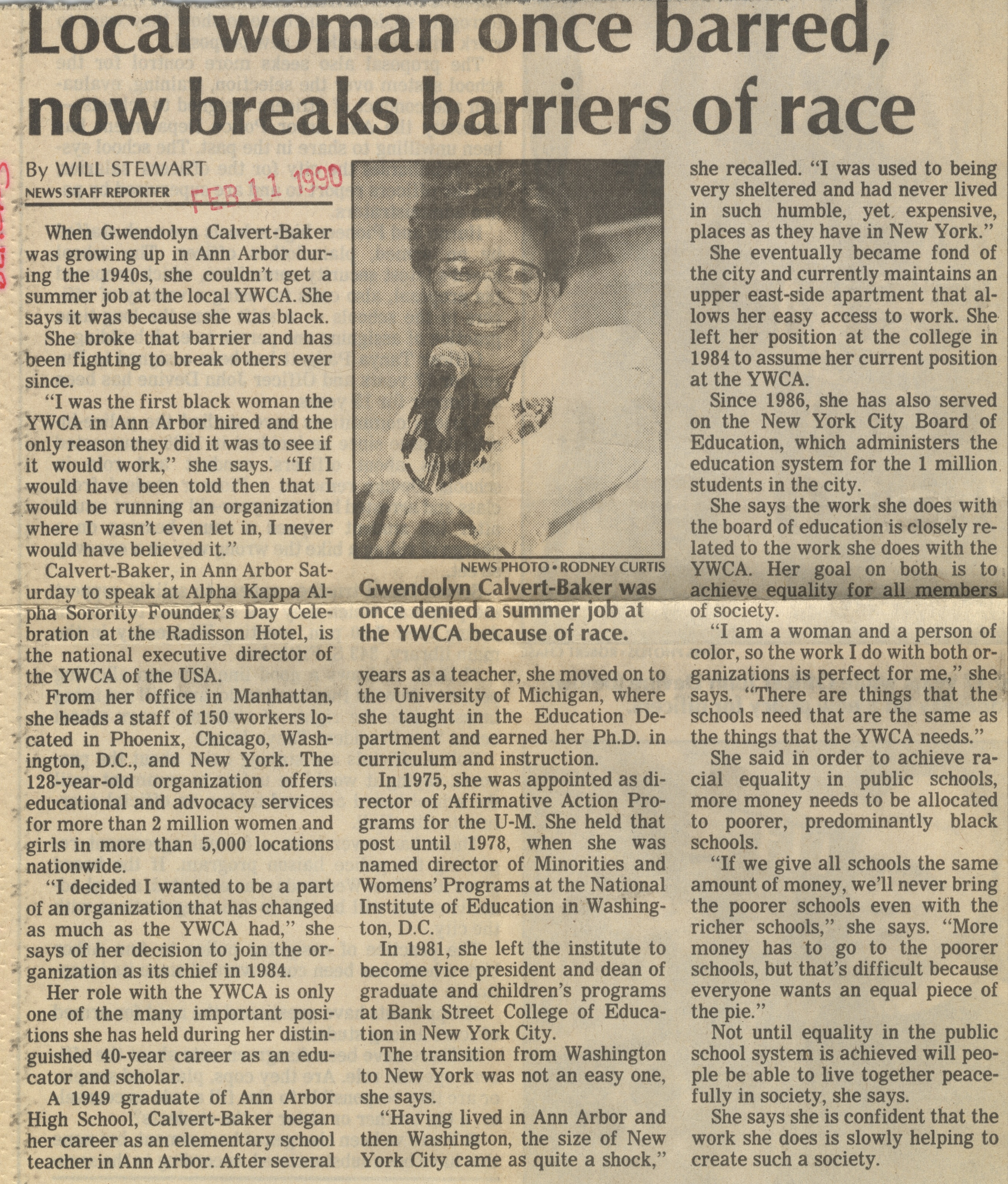 ﻿"Local woman once barred, now breaks barriers of race<br><br>'S By WILL STEWART ^ , .qoft<br><br>NEWS STAFF REPORTER 1. J-<br><br>i When Gwendolyn Calvert-Baker J was growing up in Ann Arbor dur-^ ing the 1940s, she couldn’t get a summer job at the local YWCA. She says it was because she was black.<br><br>She broke that barrier and has been fighting to break others ever since.<br><br>“I was the first black woman the YWCA in Ann Arbor hired and the only reason they did it was to see if it would work,” she says. “If I would have been told then that I would be running an organization where I wasn’t even let in, I never would have believed it.”<br><br>Calvert-Baker, in Ann Arbor Saturday to speak at Alpha Kappa Alpha Sorority Founder s Day Celebration at the Radisson Hotel, is . the national executive director of the YWCA of the USA.<br><br>From her office in Manhattan, she heads a staff of 150 workers lo-■ cated in Phoenix, Chicago, Washington, D.C., and New York. The 128-year-old organization offers educational and advocacy services for more than 2 million women and girls in more than 5,000 locations nationwide.<br><br>“I decided I wanted to be a part of an organization that has changed as much as the YWCA had,” she says of her decision to join the or-- ganization as its chief in 1984.<br><br>Her role with the YWCA is only one of the many important posi-_ tions she has held during her distinguished 40-year career as an educator and scholar.<br><br>A 1949 graduate of Ann Arbor High School, Calvert-Baker began her career as an elementary school teacher in Ann Arbor. After several<br><br>NEWS PHOTO • RODNEY CURTIS<br><br>Gwendolyn Calvert-Baker was<br><br>once denied a summer job at the YWCA because of race.<br><br>years as a teacher, she moved on to the University of Michigan, where she taught in the Education Department and earned her Ph.D. in curriculum and instruction.<br><br>In 1975, she was appointed as director of Affirmative Action Programs for the U-M. She held that post until 1978, when she was named director of Minorities and Womens’ Programs at the National Institute of Education in Washington, D.C.<br><br>In 1981, she left the institute to become vice president and dean of graduate and children’s programs at Bank Street College of Education in New York City.<br><br>The transition from Washington to New York was not an easy one, she says.<br><br>“Having lived in Ann Arbor and then Washington, the size of New York City came as quite a shock,”<br><br>she recalled. “I was used to being very sheltered and had never lived in such humble, yet expensive, places as they have in New York.” She eventually became fond of the city and currently maintains an upper east-side apartment that allows her easy access to work. She left her position at the college in | 1984 to assume her current position j at the YWCA.<br><br>Since 1986, she has also served on the New York City Board of Education, which administers the education system for the 1 million students in the city.<br><br>She says the work she does with 1 the board of education is closely re- : lated to the work she does with the j YWCA. Her goal on both is to ; achieve equality for all members ; of society.<br><br>“I am a woman and a person of I color, so the work I do with both or- : ganizations is perfect for me,” she says. “There are things that the schools need that are the same as the things that the YWCA needs.” She said in order to achieve racial equality in public schools, more money needs to be allocated to poorer, predominantly black schools.<br><br>“If we give all schools the same amount of money, we’ll never bring the poorer schools even with the richer schools,” she says. “More money has to go to the poorer schools, but that’s difficult because everyone wants an equal piece of the pie.”<br><br>Not until equality in the public school system is achieved will people be able to live together peacefully in society, she says.<br><br>She says she is confident that the work she does is slowly helping to create such a society.