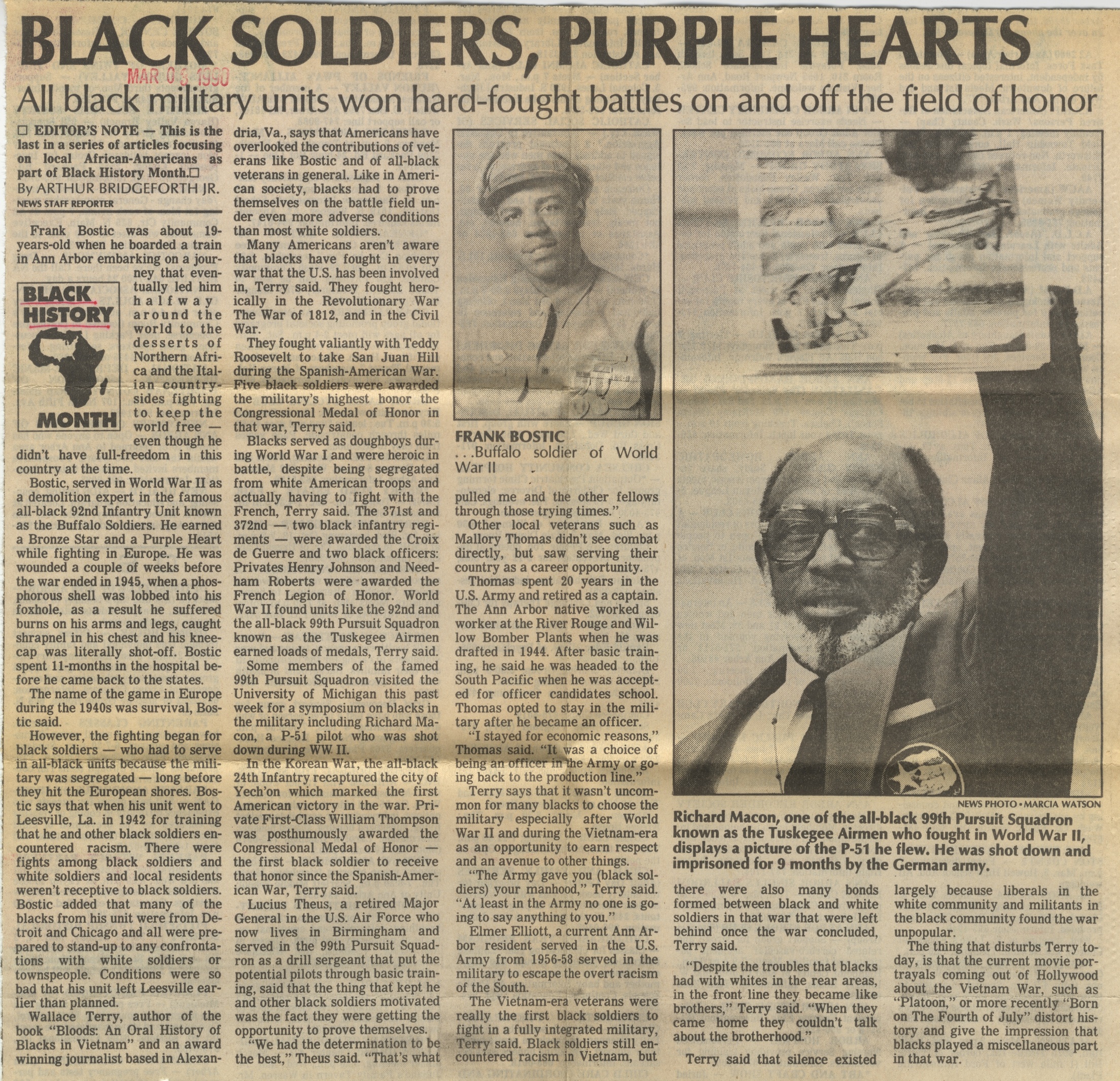 EDITOR's NOTE -- This is the last in a series of articles focusing on local African-Americans as part of Black History Month.

Frank Bostic was about 19-years-old when he boarded a train in Ann Arbor embarking on a journey that eventually led him halfway around the world to the deserts of Northern Africa and the Italian countrysides fighting the keep the world free -- even though he didn't have full freedom in this country at the time.

Bostic, served in World War II as a demolition expert in the famous all-black 92nd Infantry Unit known as the Buffalo Soldiers. He earned a Bronze Star and a Purple HEart while fighting in Europe. He was wounded a couple of weeks before the war ended in 1945, when a phosphorous shell was lobbed into hi foxhole, as a result he suffered burns on his arms and legs, caught shrapnel in his chest and his kneecap was literally shot-off. Bostic spent 11 months in the hospital before he came back to the states.

The name of the game in Europe during the 1940s was survival, Bostic said.

However, the fighting began for black soldiers -- who has to serve in all-black units because the military was segregated -- ong before they hit the European shores. Bostic says that when his unit went to Leesville, La. in 1942 for training that he and other black soldiers encountered racism, There were fights among black soldiers and white soldiers and local residents weren't receptive to black soldiers. Bostic added that many of the blacks from his unit were from Detroit and Chicago and all were prepared to stand up to any confrontations with white soldiers or townspeople. Conditions were so bad that his unit left Leesville earlier than planned.

Wallace Terry, author of the book "Bloods: An Oral History of Blacks in Vietnam" and an award winning journalist based in Alexandria, Va., says that Americans have overlooked the contributions of veterans like Bostic and of all-black veterans in general. Like in American society, blacks had to prove themselves on the battle field under even more adverse conditions than most white soldiers.

Many Americans aren't aware that blacks have fought in every war that the U.S. has been involved in, Terry said. They fought heroically in the Revolutionary War, The War of 1812, and in the Civil War.

They fought valiantly with Teddy Roosevelt to take San Juan Hill during the Spanish-American War. Five black soldiers were awarded the military's highest honor the Congressional Medal of Honor in that war, Terry said.

Blacks served as doughb oys during World War I and were heroic in battle, despite being segregated from white American troops and actually having to fight with the French, Terry said. The 371st and 372nd -- two black infantry regiments -- were awarded the Croix de Guerre and two black officers: Privates Henry Johnson and Needham Roberts were awarded the French Legion of Honor. World War II found units like the 92nd and the all-black 99th Pursuit Squadron known as the Tuskegee Airmen earned loads of medals, Terry said.

Some members of the famed 99th Pursuit Squadron visited the University of Michigan this past week for a symposium on blacks in the military including Richard Macon, a P-51 pilot who was shot down during WWII.

In the Korean War, the all-black 24th Infantry recaptured the city of Yech'on which marked the first American victory in the war. Private First-Class William Thompson was posthumously awarded the Congressional Medal of Honor -- the first black soldier to receive that honor since the Spanish- American War, Terry said.

Lucius Theus, a retired Major General in the U.S. Air Force who now lives in Birmingham and served int eh in the 99th Pursuit Squadron as a drill sergeant that put the potential pilots through basic training, said that the thing that kept he and other black soldiers motivated was the fact they were getting the opportunity to prove themselves.

"We had the determination to be the best," Theus said. "That's what pulled me and the other fellows through those trying times."

Other local veterans such as Mallory Thomas didn't see combat directly, but saw serving their country as a career opportunity.

Thomas spent 20 years in the U.S. Army and retired as a captain. The Ann Arbor native worked as worker at the River Rouge and Willow Bomber Plants when he was drafted in 1944. After basic training, he said he was headed to the South Pacific when he was accepted for officer candidates school. Thomas opted to stay in the military after he became an officer.

"I stayed for economic reasons," Thomas said. "It was a choice of being an officer in the Army or going back to the production line."

Terry says that it wasn't uncommon for many blacks to choose the military especially after World War II and during the Vietnam-era as an opportunity to earn respect and an avenue to other things.

"The Army gave you (black soldiers) your manhood," Terry said. "At least in the Army no one is going to say anything to you."

Elmer Elliott, a current Ann Arbor resident served in the U.S. Army from 1956-58 served in the military to escape the overt racism of the South.

The Vietnam-era veterans were really the first black soldiers to fight in a fully integrated military, Terry said. Black soldiers still encountered racism in Vietnam, but there were also many bonds formed between black and white soldiers in that war that were left behind once the war concluded, Terry said.

"Despite the troubles that blacks had with whites in the rear areas, in the front line they became like brothers," Terry said. "When they came home they couldn't talk about the brotherhood."

Terry said that silence existed largely because liberals in the white community and militants in the black community found the war unpopular.

The thing that disturbs Terry today, is the current movie portrayals coming out of Hollywood about the Vietnam War, such as "Platoon," or more recently "Born on The Fourth of July" distort history and give the impression that blacks played a miscellaneous part in that war.