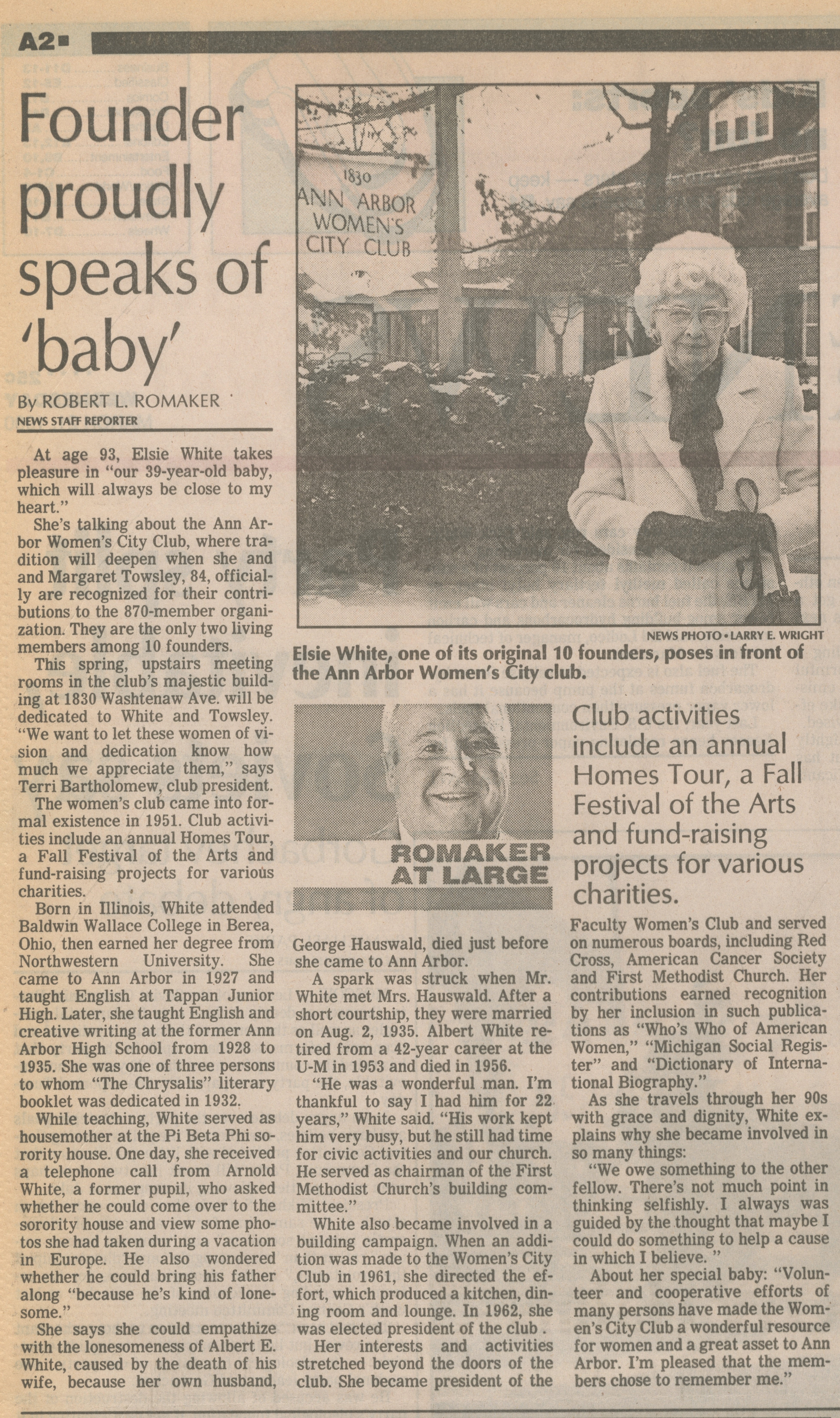 At age 93, Elsie White takes pleasure in “our 39-year-old baby, which will always be close to my heart.”

She’s talking about the Ann Arbor Women’s City Club, where tradition will deepen when she and and Margaret Towsley, 84, officially are recognized for their contributions to the 870-member organization. They are the only two living members among 10 founders.

This spring, upstairs meeting rooms in the club’s majestic building at 1830 Washtenaw Ave. will be dedicated to White and Towsley. “We want to let these women of vision and dedication know how much we appreciate them,” says Terri Bartholomew, club president.

The women’s club came into formal existence in 1951. Club activities include an annual Homes Tour, a Fall Festival of the Arts and fund-raising projects for various charities.

Born in Illinois, White attended Baldwin Wallace College in Berea, Ohio, then earned her degree from Northwestern University. She came to Ann Arbor in 1927 and taught English at Tappan Junior High. Later, she taught English and creative writing at the former Ann Arbor High School from 1928 to 1935. She was one of three persons to whom “The Chrysalis” literary booklet was dedicated in 1932.

While teaching, White served as housemother at the Pi Beta Phi sorority house. One day, she received a telephone call from Arnold White, a former pupil, who asked whether he could come over to the sorority house and view some photos she had taken during a vacation in Europe. He also wondered whether he could bring his father along “because he’s kind of lonesome.”

She says she could empathize with the lonesomeness of Albert E. White, caused by the death of his wife, because her own husband,

Elsie White, one of its original 10 founders, poses in front of the Ann Arbor Women's City club.

George Hauswald, died just before she came to Ann Arbor.

“He was a wonderful man. I’m thankful to say I had him for 22 years,” White said. “His work kept him very busy, but he still had time for civic activities and our church. He served as chairman of the First Methodist Church’s building committee.”

White also became involved in a building campaign. When an addition was made to the Women’s City Club in 1961, she directed the effort, which produced a kitchen, dining room and lounge. In 1962, she was elected president of the club .

Her interests and activities stretched beyond the doors of the club. She became president of the

Club activities include an annual Homes Tour, a Fall Festival of the Arts and fund-raising projects for various charities.

Faculty Women’s Club and served on numerous boards, including Red Cross, American Cancer Society and First Methodist Church. Her contributions earned recognition by her inclusion in such publications as “Who’s Who of American Women,” “Michigan Social Register” and “Dictionary of International Biography.”

As she travels through her 90s with grace and dignity, White explains why she became involved in so many things:

“We owe something to the other fellow. There’s not much point in thinking selfishly. I always was guided by the thought that maybe I could do something to help a cause in which I believe. ”

About her special baby: “Volunteer and cooperative efforts of many persons have made the Women’s City Club a wonderful resource for women and a great asset to Ann Arbor. I’m pleased that the members chose to remember me.”