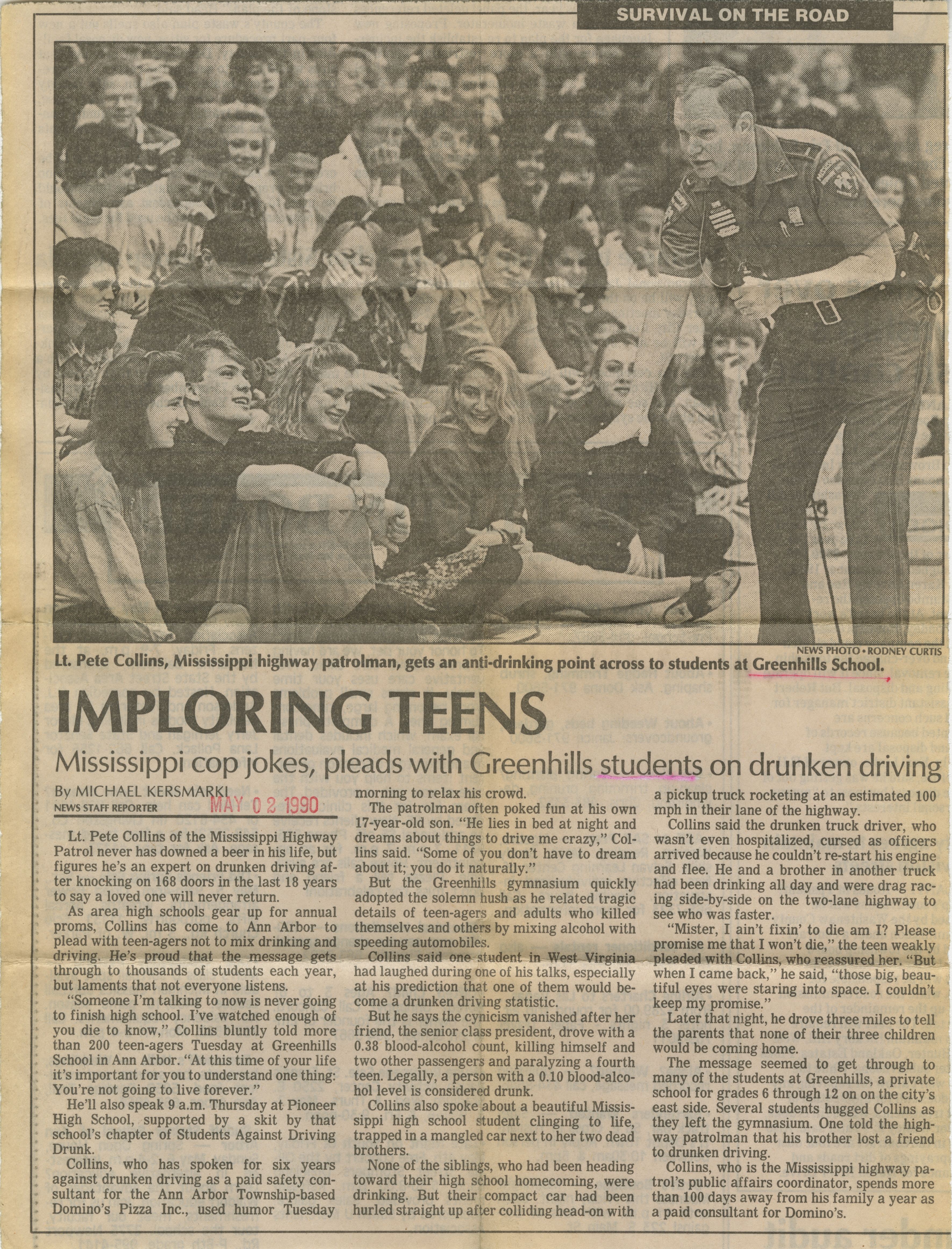 ﻿SURVIVAL ON THE ROAD

Lt. Pete Collins, Mississippi highway patrolman, gets an anti-drinking point across to students at Greenhills SchooL

Lt. Pete Collins of the Mississippi Highway Patrol never has downed a beer in his life, but figures he’s an expert on drunken driving after knocking on 168 doors in the last 18 years to say a loved one will never return.

As area high schools gear up for annual proms, Collins has come to Ann Arbor to plead with teen-agers not to mix drinking and driving. He’s proud that the message gets through to thousands of students each year, but laments that not everyone listens.

“Someone I’m talking to now is never going to finish high school. I’ve watched enough of you die to know,” Collins bluntly told more than 200 teen-agers Tuesday at Greenhills School in Ann Arbor. “At this time of your life it’s important for you to understand one thing: You’re not going to live forever.”

He’ll also speak 9 a.m. Thursday at Pioneer High School, supported by a skit by that school’s chapter of Students Against Driving Drunk.

Collins, who has spoken for six years against drunken driving as a paid safety consultant for the Ann Arbor Township-based Domino’s Pizza Inc., used humor Tuesday morning to relax his crowd.

The patrolman often poked fun at his own 17-year-old son. “He lies in bed at night and dreams about things to drive me crazy,” Collins said. “Some of you don’t have to dream about it; you do it naturally.”

But the Greenhills gymnasium quickly adopted the solemn hush as he related tragic details of teen-agers and adults who killed themselves and others by mixing alcohol with speeding automobiles.

Collins said one student in West Virginia had laughed during one of his talks, especially at his prediction that one of them would become a drunken driving statistic.

But he says the cynicism vanished after her friend, the senior class president, drove with a 0.38 blood-alcohol count, killing himself and two other passengers and paralyzing a fourth teen. Legally, a person with a 0.10 blood-alcohol level is considered drunk.

Collins also spoke about a beautiful Mississippi high school student clinging to life, trapped in a mangled car next to her two dead brothers.

None of the siblings, who had been heading toward their high school homecoming, were drinking. But their compact car had been hurled straight up after colliding head-on with a pickup truck rocketing at an estimated 100 mph in their lane of the highway.

Collins said the drunken truck driver, who wasn’t even hospitalized, cursed as officers arrived because he couldn’t re-start his engine and flee. He and a brother in another truck had been drinking all day and were drag racing side-by-side on the two-lane highway to see who was faster.

“Mister, I ain’t fixin’ to die am I? Please promise me that I won’t die,” the teen weakly pleaded with Collins, who reassured her. “But when I came back,” he said, “those big, beautiful eyes were staring into space. I couldn’t keep my promise.”

Later that night, he drove three miles to tell the parents that none of their three children would be coming home.

The message seemed to get through to many of the students at Greenhills, a private school for grades 6 through 12 on on the city’s east side. Several students hugged Collins as they left the gymnasium. One told the highway patrolman that his brother lost a friend to drunken driving.

Collins, who is the Mississippi highway patrol’s public affairs coordinator, spends more than 100 days away from his family a year as a paid consultant for Domino’s.