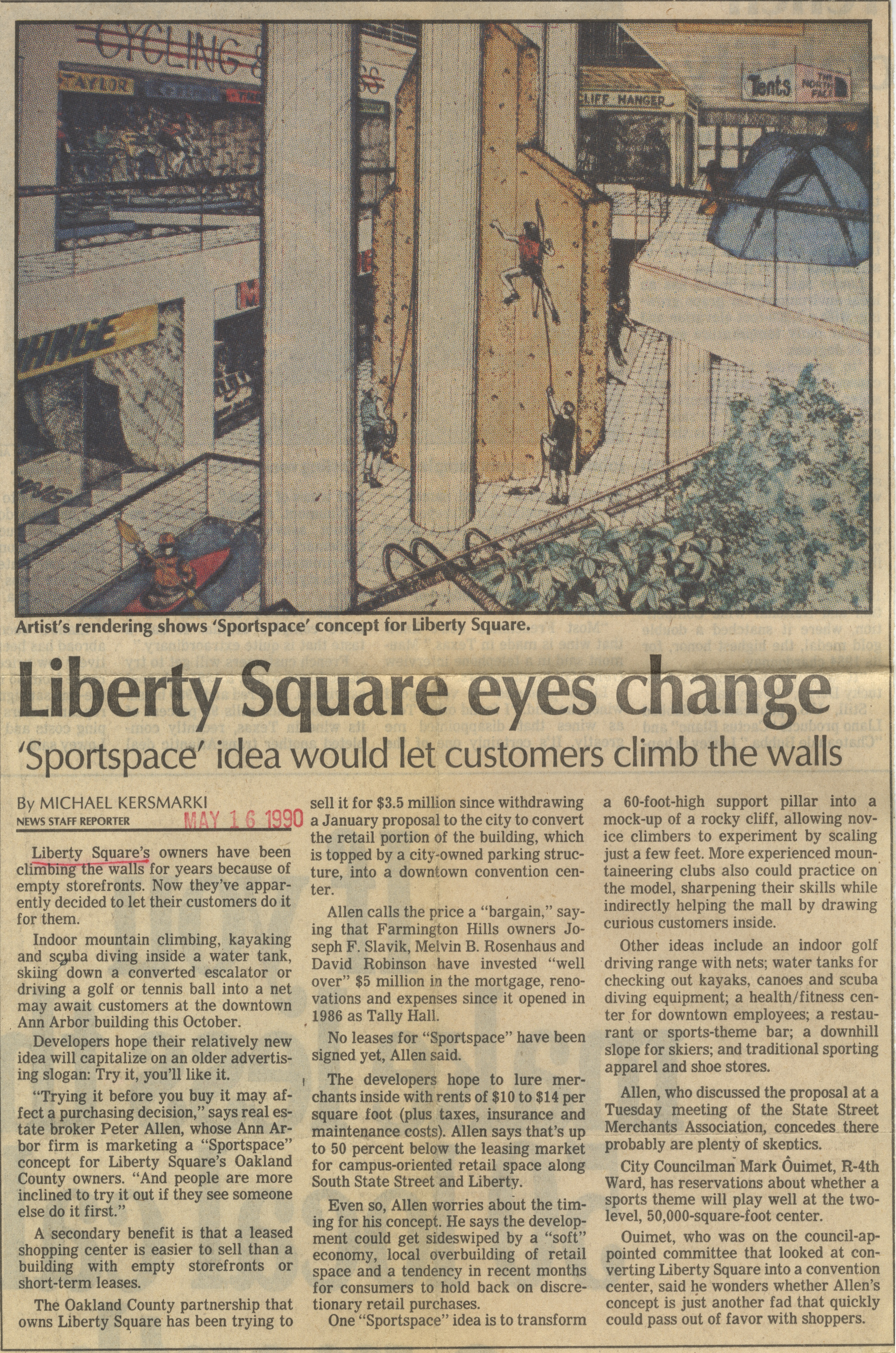 Liberty Square’s owners have been climbing the” walls' for years because of empty storefronts. Now they’ve apparently decided to let their customers do it for them.

Indoor mountain climbing, kayaking and sqpba diving inside a water tank, skiing down a converted escalator or driving a golf or tennis ball into a net may await customers at the downtown Ann Arbor building this October.

Developers hope their relatively new idea will capitalize on an older advertising slogan: Try it, you’ll like it.

“Trying it before you buy it may affect a purchasing decision,” says real estate broker Peter Allen, whose Ann Arbor firm is marketing a “Sportspace” concept for Liberty Square’s Oakland County owners. “And people are more inclined to try it out if they see someone else do it first.”

A secondary benefit is that a leased shopping center is easier to sell than a building with empty storefronts or short-term leases.

The Oakland County partnership that owns Liberty Square has been trying to sell it for $3.5 million since withdrawing a January proposal to the city to convert the retail portion of the building, which is topped by a city-owned parking structure, into a downtown convention center.

Allen calls the price a “bargain,” saying that Farmington Hills owners Joseph F. Slavik, Melvin B. Rosenhaus and David Robinson have invested “well over” $5 million in the mortgage, renovations and expenses since it opened in 1986 as Tally Hall.

No leases for “Sportspace” have been signed yet, Allen said, i The developers hope to lure merchants inside with rents of $10 to $14 per square foot (plus taxes, insurance and maintenance costs). Allen says that’s up to 50 percent below the leasing market for campus-oriented retail space along South State Street and Liberty.

Even so, Allen worries about the timing for his concept. He says the development could get sideswiped by a “soft” economy, local overbuilding of retail space and a tendency in recent months for consumers to hold back on discretionary retail purchases.

One “Sportspace” idea is to transform a 60-foot-high support pillar into a mock-up of a rocky cliff, allowing novice climbers to experiment by scaling just a few feet. More experienced mountaineering clubs also could practice on the model, sharpening their skills while indirectly helping the mall by drawing curious customers inside.

Other ideas include an indoor golf driving range with nets; water tanks for checking out kayaks, canoes and scuba diving equipment; a health/fitness center for downtown employees; a restaurant or sports-theme bar; a downhill slope for skiers; and traditional sporting apparel and shoe stores.

Allen, who discussed the proposal at a Tuesday meeting of the State Street Merchants Association, concedes there probably are plenty of skeptics.

City Councilman Mark Ouimet, R-4th Ward, has reservations about whether a sports theme will play well at the two-level, 50,000-square-foot center.

Ouimet, who was on the council-appointed committee that looked at converting Liberty Square into a convention center, said he wonders whether Allen’s concept is just another fad that quickly could pass out of favor with shoppers.