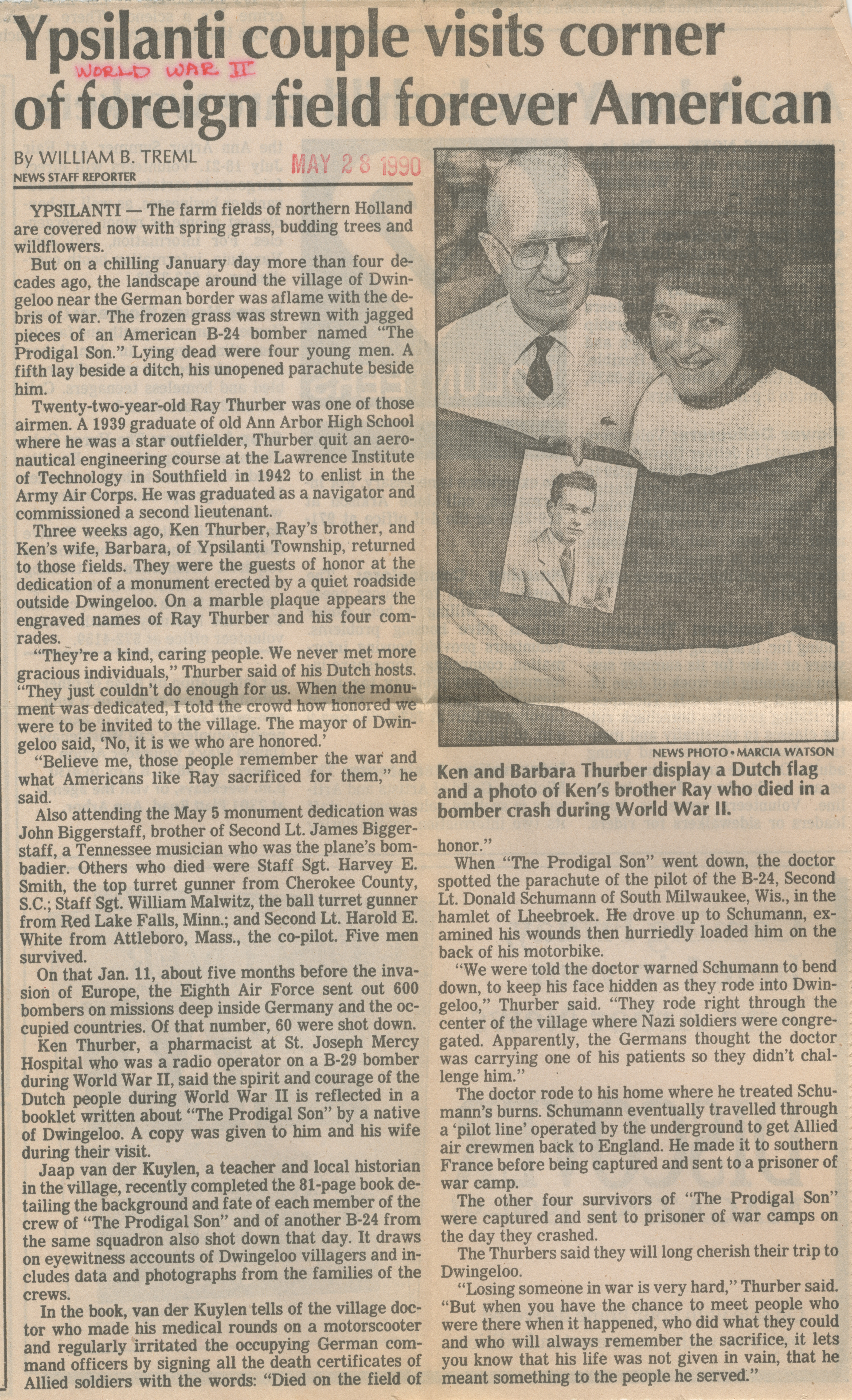 But on a chilling January day more than four decades ago, the landscape around the village of Dwingeloo near the German border was aflame with the debris of war. The frozen grass was strewn with jagged pieces of an American B-24 bomber named “The Prodigal Son.” Lying dead were four young men. A fifth lay beside a ditch, his unopened parachute beside him.

Twenty-two-year-old Ray Thurber was one of those airmen. A 1939 graduate of old Ann Arbor High School where he was a star outfielder, Thurber quit an aeronautical engineering course at the Lawrence Institute of Technology in Southfield in 1942 to enlist in the Army Air Corps. He was graduated as a navigator and commissioned a second lieutenant.

Three weeks ago, Ken Thurber, Ray’s brother, and Ken’s wife, Barbara, of Ypsilanti Township, returned to those fields. They were the guests of honor at the dedication of a monument erected by a quiet roadside outside Dwingeloo. On a marble plaque appears the engraved names of Ray Thurber and his four comrades.

“They’re a kind, caring people. We never met more gracious individuals,” Thurber said of his Dutch hosts. “They just couldn’t do enough for us. When the monument was dedicated, I told the crowd how honored we were to be invited to the village. The mayor of Dwingeloo said, ‘No, it is we who are honored.’

“Believe me, those people remember the war and what Americans like Ray sacrificed for them,” he said.

On that Jan. 11, about five months before the invasion of Europe, the Eighth Air Force sent out 600 bombers on missions deep inside Germany and the occupied countries. Of that number, 60 were shot down.

Ken Thurber, a pharmacist at St. Joseph Mercy Hospital who was a radio operator on a B-29 bomber during World War II, said the spirit and courage of the Dutch people during World War II is reflected in a booklet written about “The Prodigal Son” by a native of Dwingeloo. A copy was given to him and his wife during their visit

Jaap van der Kuylen, a teacher and local historian in the village, recently completed the 81-page book detailing the background and fate of each member of the crew of “The Prodigal Son” and of another B-24 from the same squadron also shot down that day. It draws on eyewitness accounts of Dwingeloo villagers and includes data and photographs from the families of the crews.

In the book, van der Kuylen tells of the village doctor who made his medical rounds on a motorscooter and regularly irritated the occupying German command officers by signing all the death certificates of Allied soldiers with the words: “Died on the field of honor."

When “The Prodigal Son” went down, the doctor spotted the parachute of the pilot of the B-24, Second Lt. Donald Schumann of South Milwaukee, Wis., in the hamlet of Lheebroek. He drove up to Schumann, examined his wounds then hurriedly loaded him on the back of his motorbike.

“We were told the doctor warned Schumann to bend down, to keep his face hidden as they rode into Dwingeloo,” Thurber said. “They rode right through the center of the village where Nazi soldiers were congregated. Apparently, the Germans thought the doctor was carrying one of his patients so they didn’t challenge him.”

The doctor rode to his home where he treated Schumann’s burns. Schumann eventually travelled through a ‘pilot line’ operated by the underground to get Allied air crewmen back to England. He made it to southern France before being captured and sent to a prisoner of war camp.

The other four survivors of “The Prodigal Son” were captured and sent to prisoner of war camps on the day they crashed.

The Thurbers said they will long cherish their trip to Dwingeloo.

“Losing someone in war is very hard,” Thurber said. “But when you have the chance to meet people who were there when it happened, who did what they could and who will always remember the sacrifice, it lets you know that his life was not given in vain, that he meant something to the people he served.”

Ken and Barbara Thurber display a Dutch flag and a photo of Ken's brother Ray who died in a bomber crash during World War II.