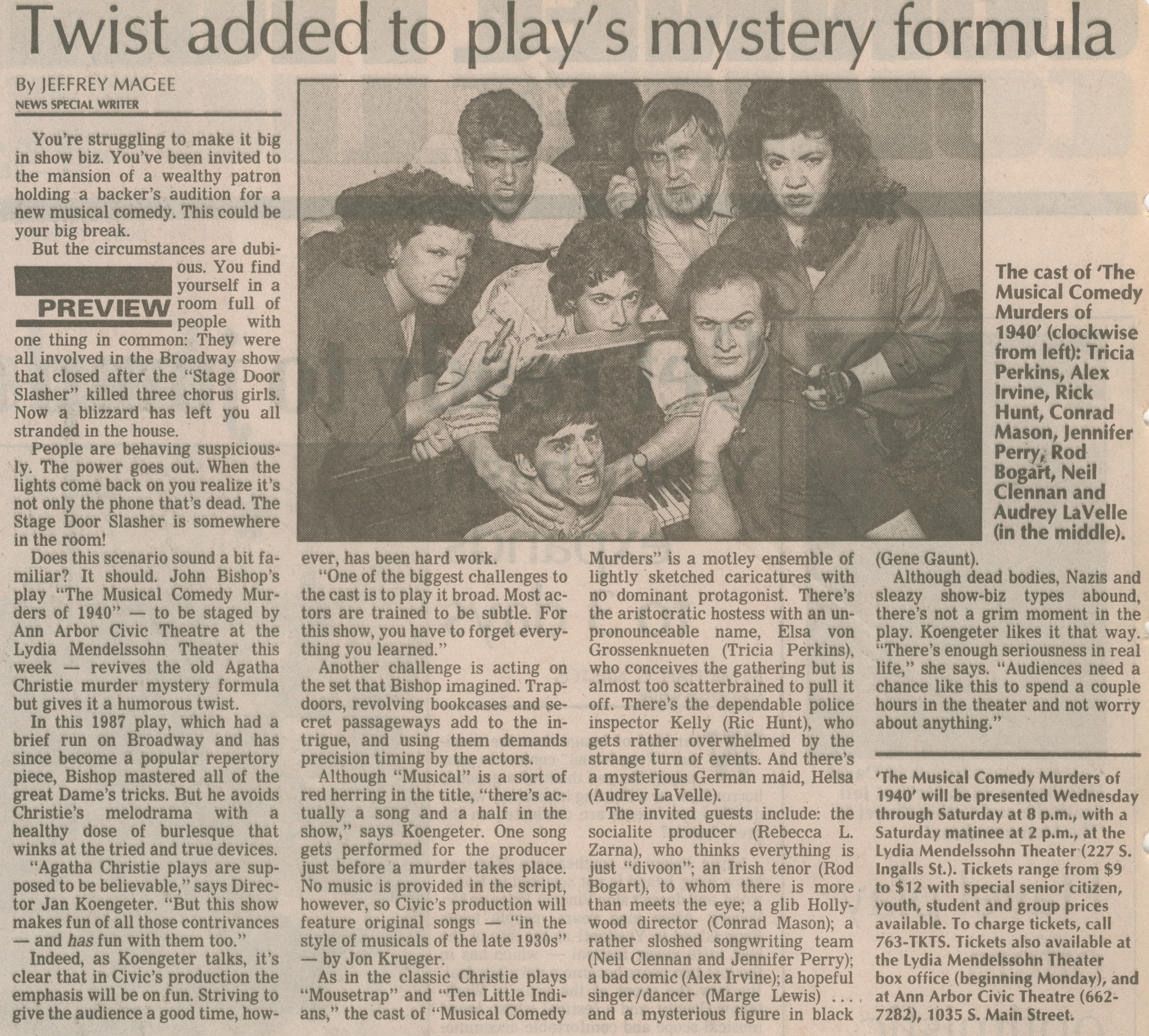 You’re struggling to make it big in show biz. You’ve been invited to the mansion of a wealthy patron holding a backer’s audition for a new musical comedy. This could be your big break.

But the circumstances are dubious. You find yourself in a room full of people with one thing in common: They were all involved in the Broadway show that closed after the “Stage Door Slasher” killed three chorus girls. Now a blizzard has left you all stranded in the house.

People are behaving suspiciously. The power goes out. When the lights come back on you realize it’s not only the phone that’s dead. The Stage Door Slasher is somewhere in the room!

Does this scenario sound a bit familiar? It should. John Bishop’s play “The Musical Comedy Murders of 1940” — to be staged by Ann Arbor Civic Theatre at the Lydia Mendelssohn Theater this week — revives the old Agatha Christie murder mystery formula but gives it a humorous twist.

In this 1987 play, which had a brief run on Broadway and has since become a popular repertory piece, Bishop mastered all of the great Dame’s tricks. But he avoids Christie’s melodrama with a healthy dose of burlesque that winks at the tried and true devices.

“Agatha Christie plays are supposed to be believable,” says Director Jan Koengeter. “But this show makes fun of all those contrivances — and has fun with them too.”

Indeed, as Koengeter talks, it’s clear that in Civic’s production the emphasis will be on fun. Striving to give the audience a good time, however, has been hard work.

“One of the biggest challenges to the cast is to play it broad. Most actors are trained to be subtle. For this show, you have to forget everything you learned."

Another challenge is acting on the set that Bishop imagined. Trapdoors, revolving bookcases and secret passageways add to the intrigue, and using them demands precision timing by the actors.

Although “Musical” is a sort of red herring in the title, “there’s actually a song and a half in the show,” says Koengeter. One song gets performed for the producer just before a murder takes place. No music is provided in the script, however, so Civic’s production will feature original songs — “in the style of musicals of the late 1930s” — by Jon Krueger.

As in the classic Christie plays “Mousetrap” and "Ten Little Indians,” the cast of “Musical Comedy Murders” is a motley ensemble of lightly sketched caricatures with no dominant protagonist. There’s the aristocratic hostess with an unpronounceable name, Elsa von Grossenknueten (Tricia Perkins), who conceives the gathering but is almost too scatterbrained to pull it off. There’s the dependable police inspector Kelly (Ric Hunt), who gets rather overwhelmed by the strange turn of events. And there’s a mysterious German maid, Helsa (Audrey LaVelle).

The invited guests include: the socialite producer (Rebecca L. Zarna), who thinks everything is just “divoon”; an Irish tenor (Rod Bogart), to whom there is more than meets the eye; a glib Hollywood director (Conrad Mason); a rather sloshed songwriting team (Neil Clennan and Jennifer Perry); a bad comic (Alex Irvine); a hopeful singer/dancer (Marge Lewis) ... and a mysterious figure in black ( Gene Gaunt).

Although dead bodies, Nazis and sleazy show-biz types abound, there’s not a grim moment in the play. Koengeter likes it that way. “There’s enough seriousness in real life,” she says. “Audiences need a chance like this to spend a couple hours in the theater and not worry about anything.”