Judge May Void Verdict In Suit Over 1986 Fire 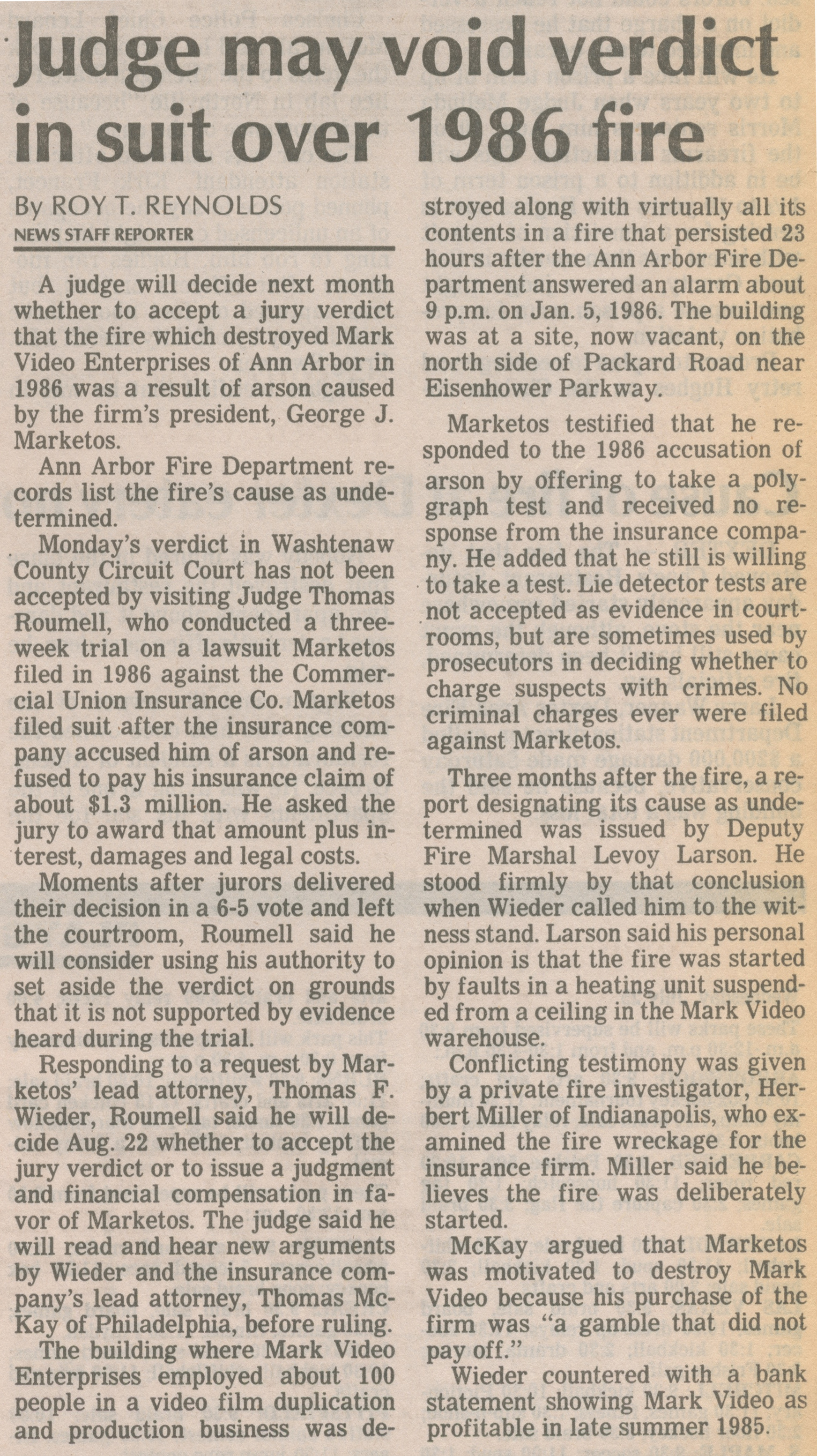 ﻿Judge may void verdict in suit over 1986 fire

A judge will decide next month whether to accept a jury verdict that the fire which destroyed Mark Video Enterprises of Ann Arbor in 1986 was a result of arson caused by the firm’s president, George J. Marketos.

Monday’s verdict in Washtenaw County Circuit Court has not been accepted by visiting Judge Thomas Roumell, who conducted a three-week trial on a lawsuit Marketos filed in 1986 against the Commercial Union Insurance Co. Marketos filed suit after the insurance company accused him of arson and refused to pay his insurance claim of about $1.3 million. He asked the jury to award that amount plus interest, damages and legal costs.

Moments after jurors delivered their decision in a 6-5 vote and left the courtroom, Roumell said he will consider using his authority to set aside the verdict on grounds that it is not supported by evidence heard during the trial.

The building where Mark Video Enterprises employed about 100 people in a video film duplication and production business was destroyed along with virtually all its contents in a fire that persisted 23 hours after the Ann Arbor Fire Department answered an alarm about 9 p.m. on Jan. 5,1986. The building was at a site, now vacant, on the north side of Packard Road near Eisenhower Parkway.

Marketos testified that he responded to the 1986 accusation of arson by offering to take a polygraph test and received no response from the insurance company. He added that he still is willing to take a test. Lie detector tests are not accepted as evidence in courtrooms, but are sometimes used by prosecutors in deciding whether to charge suspects with crimes. No criminal charges ever were filed against Marketos.

Three months after the fire, a report designating its cause as undetermined was issued by Deputy Fire Marshal Levoy Larson. He stood firmly by that conclusion when Wieder called him to the witness stand. Larson said his personal opinion is that the fire was started by faults in a heating unit suspended from a ceiling in the Mark Video warehouse.

Conflicting testimony was given by a private fire investigator, Herbert Miller of Indianapolis, who examined the fire wreckage for the insurance firm. Miller said he believes the fire was deliberately started.

McKay argued that Marketos was motivated to destroy Mark Video because his purchase of the firm was “a gamble that did not pay off.”