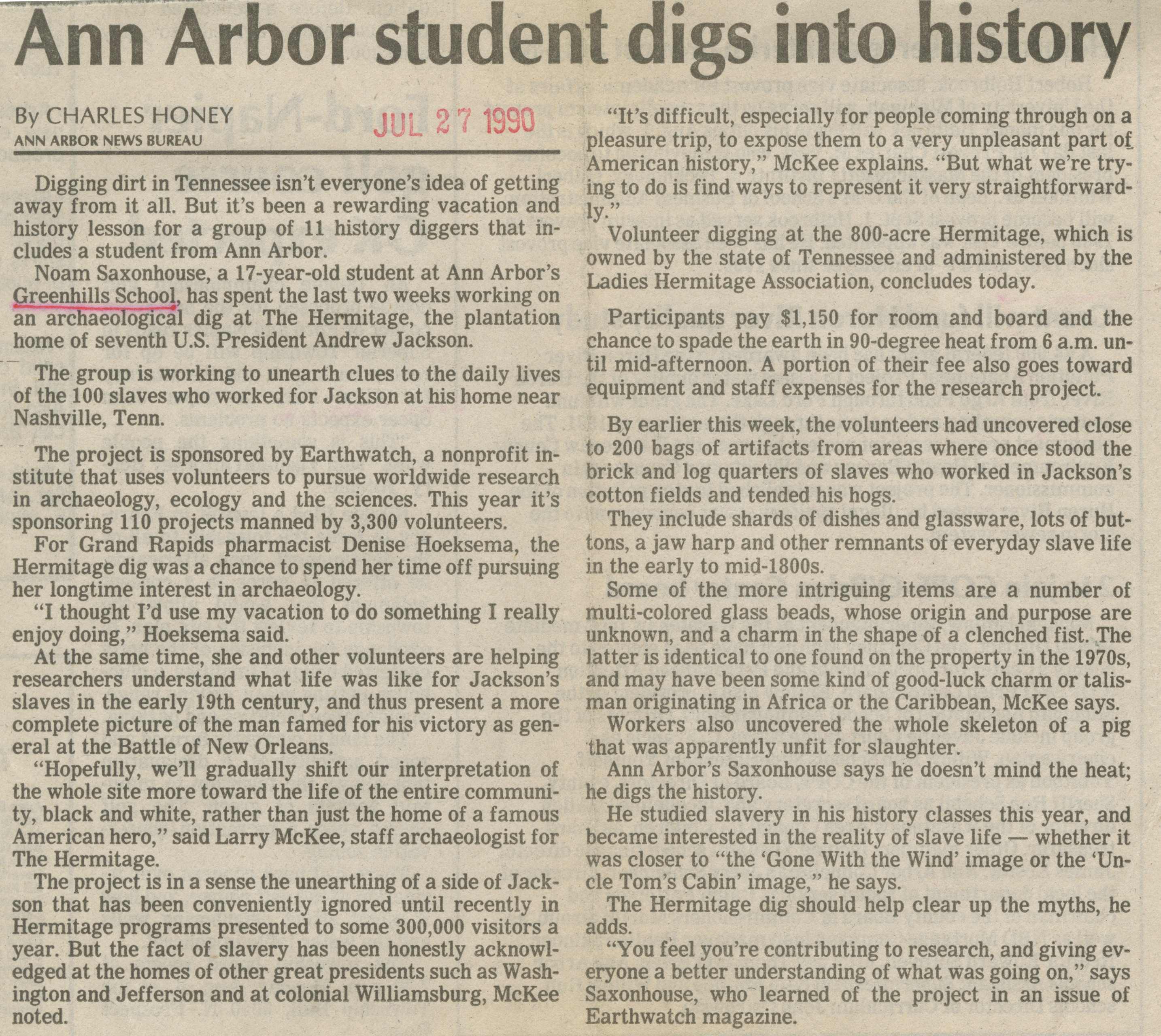 Digging dirt in Tennessee isn’t everyone’s idea of getting away from it all. But it’s been a rewarding vacation and history lesson for a group of 11 history diggers that includes a student from Ann Arbor.

Noam Saxonhouse, a 17-year-old student at Ann Arbor’s Greenhills School, has spent the last two weeks working on an archaeological dig at The Hermitage, the plantation home of seventh U.S. President Andrew Jackson.

The group is working to unearth clues to the daily lives of the 100 slaves who worked for Jackson at his home near Nashville, Tenn.

The project is sponsored by Earthwatch, a nonprofit institute that uses volunteers to pursue worldwide research in archaeology, ecology and the sciences. This year it’s sponsoring 110 projects manned by 3,300 volunteers.

For Grand Rapids pharmacist Denise Hoeksema, the Hermitage dig was a chance to spend her time off pursuing her longtime interest in archaeology.

“I thought I’d use my vacation to do something I really enjoy doing,” Hoeksema said.

At the same time, she and other volunteers are helping researchers understand what life was like for Jackson’s slaves in the early 19th century, and thus present a more complete picture of the man famed for his victory as general at the Battle of New Orleans.

“Hopefully, we’ll gradually shift our interpretation of the whole site more toward the life of the entire community, black and white, rather than just the home of a famous American hero,” said Larry McKee, staff archaeologist for The Hermitage.

The project is in a sense the unearthing of a side of Jackson that has been conveniently ignored until recently in Hermitage programs presented to some 300,000 visitors a year. But the fact of slavery has been honestly acknowledged at the homes of other great presidents such as Washington and Jefferson and at colonial Williamsburg, McKee noted.

“It’s difficult, especially for people coming through on a pleasure trip, to expose them to a very unpleasant part of American history,” McKee explains. “But what we’re trying to do is find ways to represent it very straightforwardly.”

Volunteer digging at the 800-acre Hermitage, which is owned by the state of Tennessee and administered by the Ladies Hermitage Association, concludes today.

Participants pay $1,150 for room and board and the chance to spade the earth in 90-degree heat from 6 a.m. until mid-afternoon. A portion of their fee also goes toward equipment and staff expenses for the research project.

By earlier this week, the volunteers had uncovered close to 200 bags of artifacts from areas where once stood the brick and log quarters of slaves who worked in Jackson’s cotton fields and tended his hogs.

They include shards of dishes and glassware, lots of buttons, a jaw harp and other remnants of everyday slave life in the early to mid-1800s.

Some of the more intriguing items are a number of multi-colored glass beads, whose origin and purpose are unknown, and a charm in the shape of a clenched fist. The latter is identical to one found on the property in the 1970s, and may have been some kind of good-luck charm or talisman originating in Africa or the Caribbean, McKee says.

Workers also uncovered the whole skeleton of a pig that was apparently unfit for slaughter.

Ann Arbor’s Saxonhouse says he doesn’t mind the heat; he digs the history.

He studied slavery in his history classes this year, and became interested in the reality of slave life — whether it was closer to “the ‘Gone With the Wind’ image or the ‘Uncle Tom's Cabin’ image,” he says.

The Hermitage dig should help clear up the myths, he adds.

“You feel you’re contributing to research, and giving everyone a better understanding of what was going on,” says Saxonhouse, who learned of the project in an issue of Earthwatch magazine.