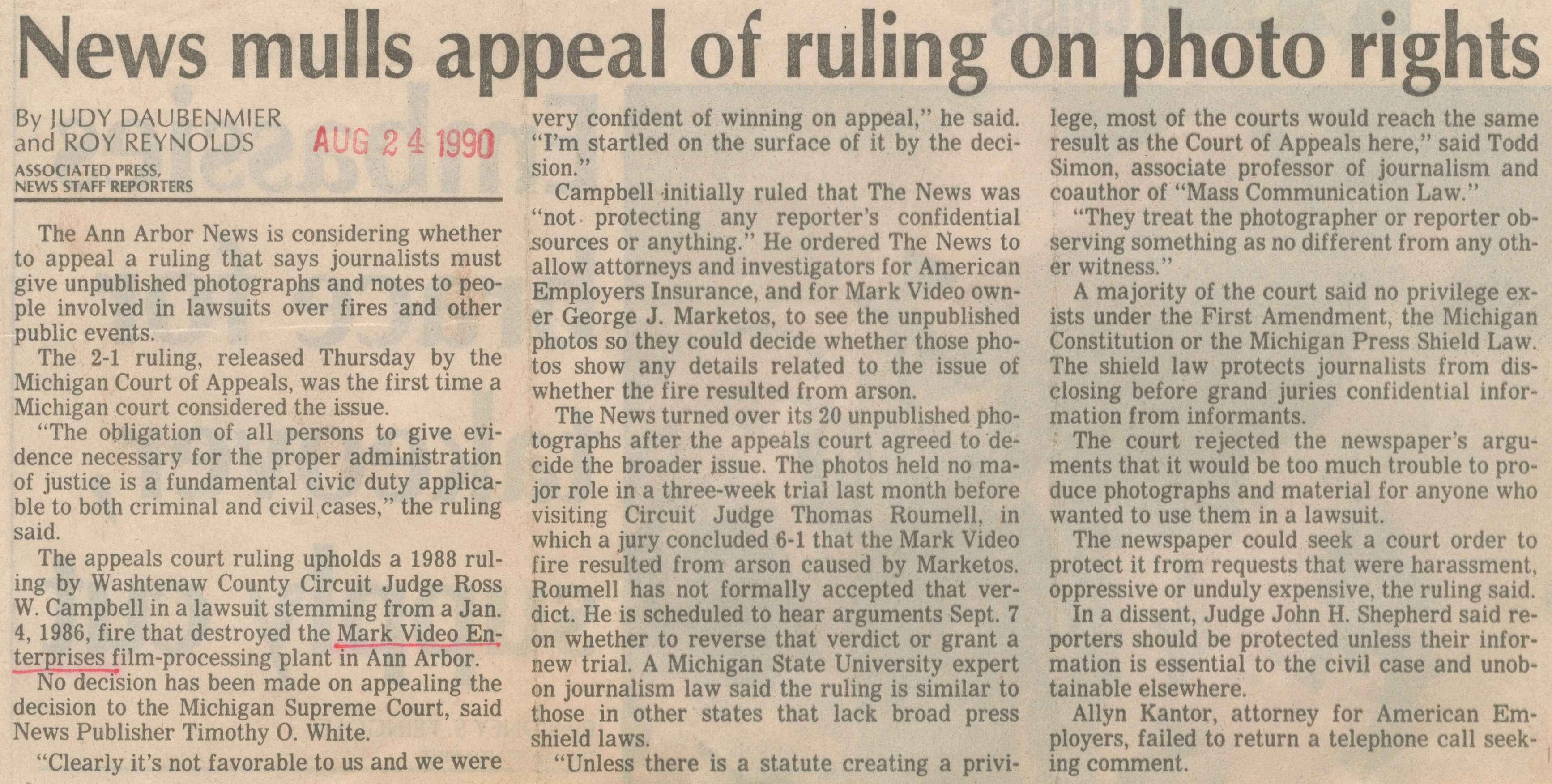 The Ann Arbor News is considering whether to appeal a ruling that says journalists must give unpublished photographs and notes to people involved in lawsuits over fires and other public events.

The 2-1 ruling, released Thursday by the Michigan Court of Appeals, was the first time a Michigan court considered the issue.

"The obligation of all persons to give evidence necessary for the proper administration of justice is a fundamental civic duty applicable to both criminal and civil cases,” the ruling said.

No decision has been made on appealing the decision to the Michigan Supreme Court, said News Publisher Timothy 0. White.

“Clearly it’s not favorable to us and we were very confident of winning on appeal,” he said. “I’m startled on the surface of it by the decision.”

Campbell initially ruled that The News was “not protecting any reporter’s confidential sources or anything.” He ordered The News to allow attorneys and investigators for American Employers Insurance, and for Mark Video owner George J. Marketos, to see the unpublished photos so they could decide whether those photos show any details related to the issue of whether the fire resulted from arson.

The News turned over its 20 unpublished photographs after the appeals court agreed to decide the broader issue. The photos held no major role in a three-week trial last month before visiting Circuit Judge Thomas Roumell, in which a jury concluded 6-1 that the Mark Video fire resulted from arson caused by Marketos. Roumell has not formally accepted that verdict. He is scheduled to hear arguments Sept. 7 on whether to reverse that verdict or grant a new trial. A Michigan State University expert on journalism law said the ruling is similar to those in other states that lack broad press shield laws.

“Unless there is a statute creating a privilege, most of the courts would reach the same result as the Court of Appeals here,” said Todd Simon, associate professor of journalism and coauthor of “Mass Communication Law.”

“They treat the photographer or reporter observing something as no different from any other witness."

A majority of the court said no privilege exists under the First Amendment, the Michigan Constitution or the Michigan Press Shield Law. The shield law protects journalists from disclosing before grand juries confidential information from informants.

The court rejected the newspaper's arguments that it would be too much trouble to produce photographs and material for anyone who wanted to use them in a lawsuit.

The newspaper could seek a court order to protect it from requests that were harassment, oppressive or unduly expensive, the ruling said.

In a dissent, Judge John H. Shepherd said reporters should be protected unless their information is essential to the civil case and unobtainable elsewhere.