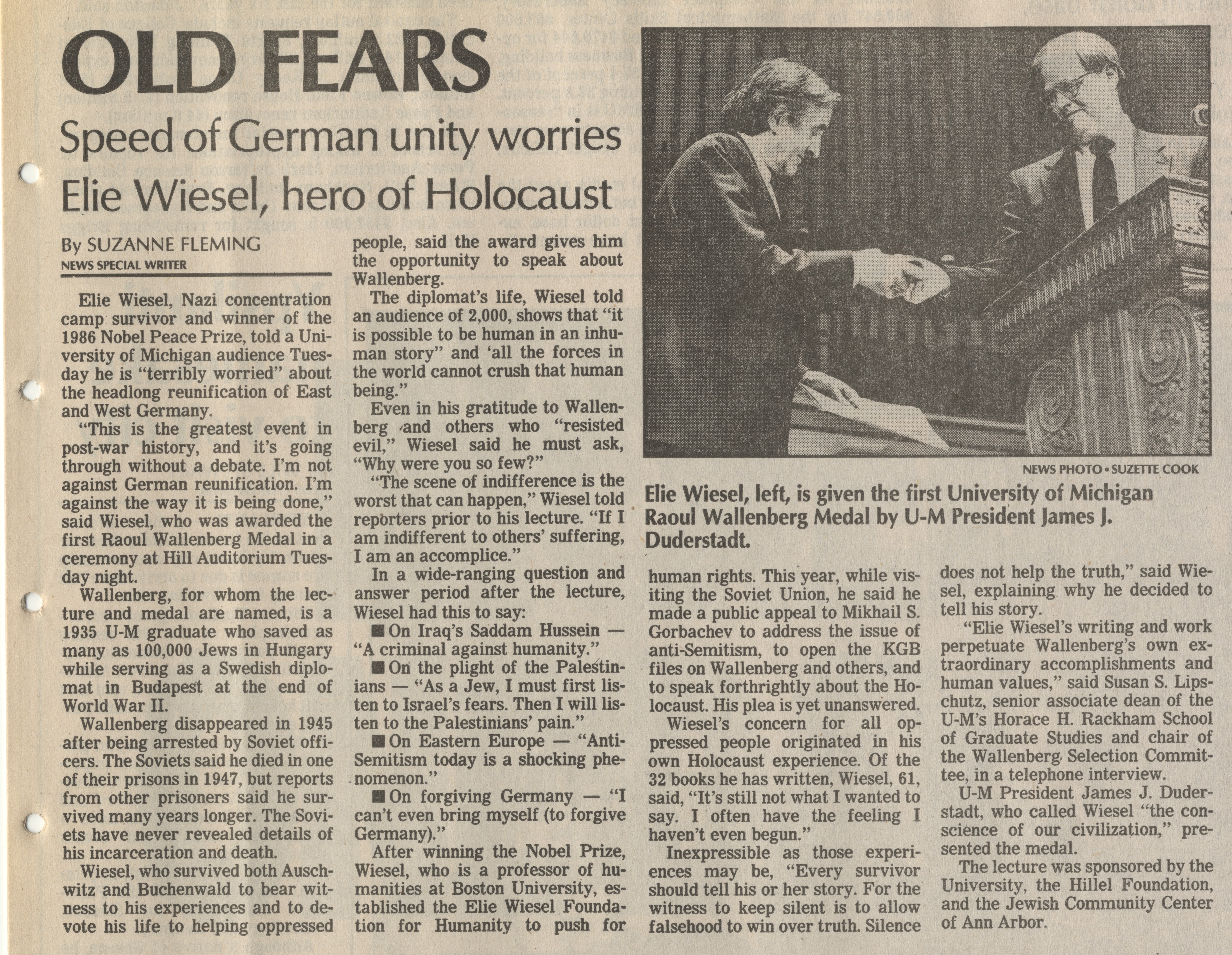 Elie Wiesel, Nazi concentration camp survivor and winner of the 1986 Nobel Peace Prize, told a University of Michigan audience Tuesday he is “terribly worried” about (. the headlong reunification of East and West Germany.

“This is the greatest event in post-war history, and it’s going through without a debate. I’m not against German reunification. I’m against the way it is being done,” said Wiesel, who was awarded the first Raoul Wallenberg Medal in a ceremony at Hill Auditorium Tuesday night.

Wallenberg, for whom the lecture and medal are named, is a 1935 U-M graduate who saved as many as 100,000 Jews in Hungary while serving as a Swedish diplomat in Budapest at the end of World War II.

Wallenberg disappeared in 1945 after being arrested by Soviet officers. The Soviets said he died in one of their prisons in 1947, but reports from other prisoners said he sur-j vived many years longer. The Soviets have never revealed details of his incarceration and death.

Wiesel, who survived both Auschwitz and Buchenwald to bear witness to his experiences and to devote his life to helping oppressed

people, said the award gives him the opportunity to speak about Wallenberg.

The diplomat’s life, Wiesel told an audience of 2,000, shows that “it is possible to be human in an inhuman story” and ‘all the forces in the world cannot crush that human being.”

Even in his gratitude to Wallenberg -and others who “resisted evil,” Wiesel said he must ask, “Why were you so few?”

“The scene of indifference is the worst that can happen,” Wiesel told repbrters prior to his lecture. “If I am indifferent to others’ suffering, I am an accomplice.”

In a wide-ranging question and answer period after the lecture, Wiesel had this to say:

■ On Iraq’s Saddam Hussein — “A criminal against humanity.”

■ On Eastern Europe — “Anti-Semitism today is a shocking phenomenon.”

■ On forgiving Germany — “I can’t even bring myself (to forgive Germany).”

After winning the Nobel Prize, Wiesel, who is a professor of humanities at Boston University, established the Elie Wiesel Foundation for Humanity to push for

human rights. This year, while visiting the Soviet Union, he said he made a public appeal to Mikhail S. Gorbachev to address the issue of anti-Semitism, to open the KGB files on Wallenberg and others, and to speak forthrightly about the Holocaust. His plea is yet unanswered.

Wiesel’s concern for all oppressed people originated in his own Holocaust experience. Of the 32 books he has written, Wiesel, 61, said, “It’s still not what I wanted to say. I often have the feeling I haven’t even begun.”

Inexpressible as those experiences may be, “Every survivor should tell his or her story. For the witness to keep silent is to allow falsehood to win over truth. Silence

does not help the truth,” said Wiesel, explaining why he decided to tell his story.

U-M President James J. Duderstadt, who called Wiesel “the conscience of our civilization,” presented the medal.

The lecture was sponsored by the University, the Hillel Foundation, and the Jewish Community Center of Ann Arbor.