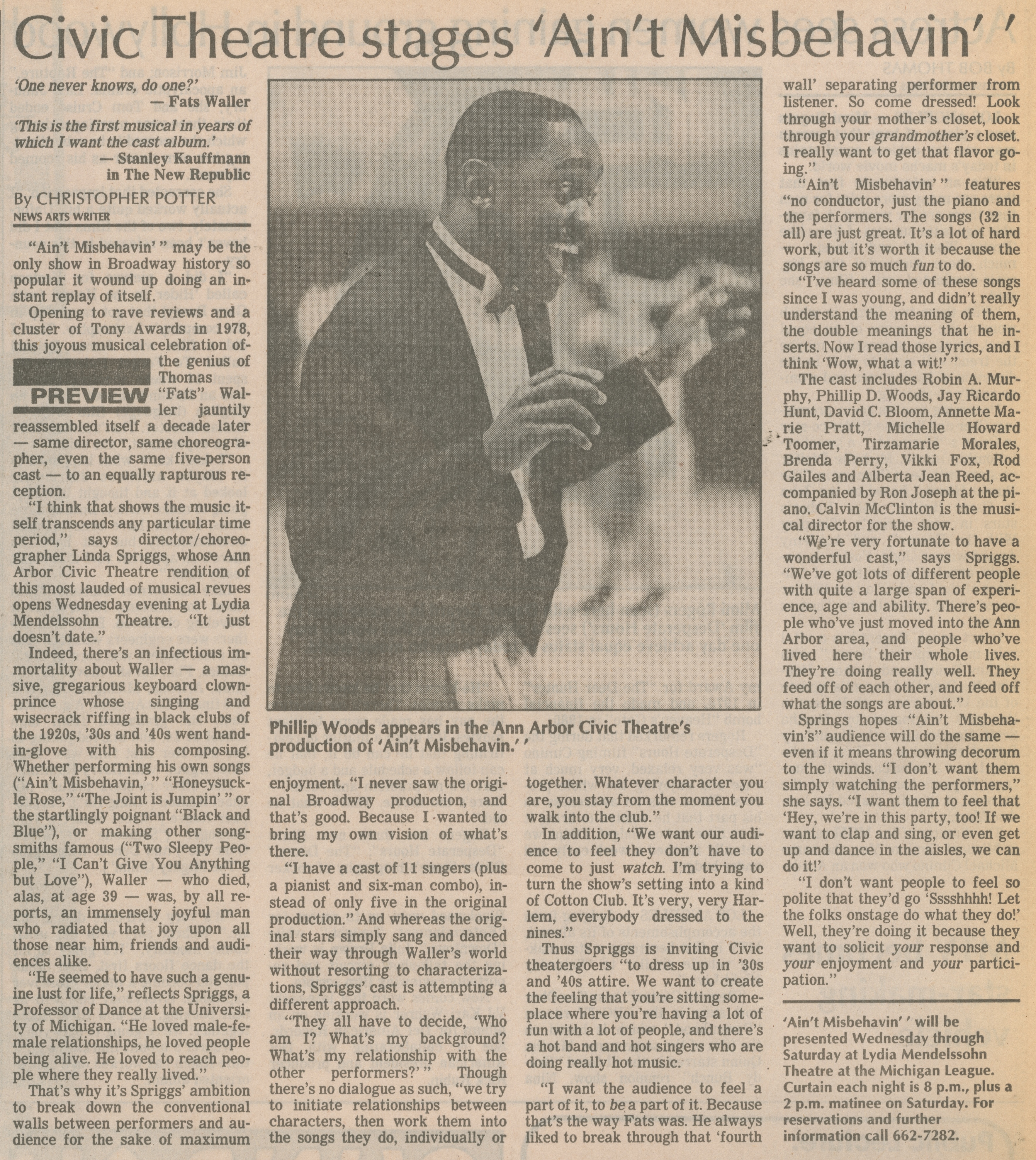 ‘This is the first musical in years of which I want the cast album. ’

— Stanley Kauffmann in The New Republic

“Ain’t Misbehavin’ ” may be the only show in Broadway history so popular it wound up doing an instant replay of itself.

Opening to rave reviews and a cluster of Tony Awards in 1978, this joyous musical celebration of the genius of Thomas "Fats" Waller jauntily reassembled itself a decade later — same director, same choreographer, even the same five-person cast — to an equally rapturous reception.

“I think that shows the music itself transcends any particular time period,” says director/choreographer Linda Spriggs, whose Ann Arbor Civic Theatre rendition of this most lauded of musical revues opens Wednesday evening at Lydia Mendelssohn Theatre. “It just doesn’t date.”

Indeed, there’s an infectious immortality about Waller — a massive, gregarious keyboard clown-prince whose singing and wisecrack riffing in black clubs of the 1920s, ’30s and ’40s went hand-in-glove with his composing. Whether performing his own songs (“Ain’t Misbehavin,’ ” “Honeysuckle Rose,” “The Joint is Jumpin’ ” or the startlingly poignant “Black and Blue”), or making other song-smiths famous (“Two Sleepy People,” “I Can’t Give You Anything but Love”), Waller — who died, alas, at age 39 — was, by all reports, an immensely joyful man who radiated that joy upon all those near him, friends and audiences alike.

“He seemed to have such a genuine lust for life,” reflects Spriggs, a Professor of Dance at the University of Michigan. “He loved male-female relationships, he loved people being alive. He loved to reach people where they really lived.”

That’s why it’s Spriggs’ ambition to break down the conventional walls between performers and audience for the sake of maximum enjoyment. “I never saw the original Broadway production, and that’s good. Because I wanted to bring my own vision of what’s there.

“I have a cast of 11 singers (plus a pianist and six-man combo), instead of only five in the original production.” And whereas the original stars simply sang and danced their way through Waller’s world without resorting to characterizations, Spriggs’ cast is attempting a different approach.

“They all have to decide, ‘Who am I? What’s my background? What’s my relationship with the other performers?’ ” Though there’s no dialogue as such, “we try to initiate relationships between characters, then work them into the songs they do, individually or together. Whatever character you are, you stay from the moment you walk into the club.”

In addition, “We want our audience to feel they don’t have to come to just watch. I’m trying to turn the show’s setting into a kind of Cotton Club. It’s very, very Harlem, everybody dressed to the nines.”

Thus Spriggs is inviting Civic theatergoers “to dress up in ’30s and ’40s attire. We want to create the feeling that you’re sitting someplace where you’re having a lot of fun with a lot of people, and there’s a hot band and hot singers who are doing really hot music.

“Ain’t Misbehavin’ ” features “no conductor, just the piano and the performers. The songs (32 in all) are just great. It’s a lot of hard work, but it’s worth it because the songs are so much fun to do.

“I’ve heard some of these songs since I was young, and didn’t really understand the meaning of them, the double meanings that he inserts. Now I read those lyrics, and I think ‘Wow, what a wit!’ ”

“We’re very fortunate to have a wonderful cast,” says Spriggs. “We’ve got lots of different people with quite a large span of experience, age and ability. There’s people who’ve just moved into the Ann Arbor area, and people who’ve lived here their whole lives. They’re doing really well. They feed off of each other, and feed off what the songs are about.”

Springs hopes “Ain’t Misbeha-vin’s” audience will do the same — even if it means throwing decorum to the winds. “I don’t want them simply watching the performers,” she says. “I want them to feel that ‘Hey, we’re in this party, too! If we want to clap and sing, or even get up and dance in the aisles, we can do it!’

“I don’t want people to feel so polite that they’d go ‘Sssshhhh! Let the folks onstage do what they do!’ Well, they’re doing it because they want to solicit your response and your enjoyment and your participation.”

'Ain't Misbehavin'' will be presented Wednesday through Saturday at Lydia Mendelssohn Theatre at the Michigan League. Curtain each night is 8 p.m., plus a 2 p.m. matinee on Saturday. For reservations and further information call 662-7282.