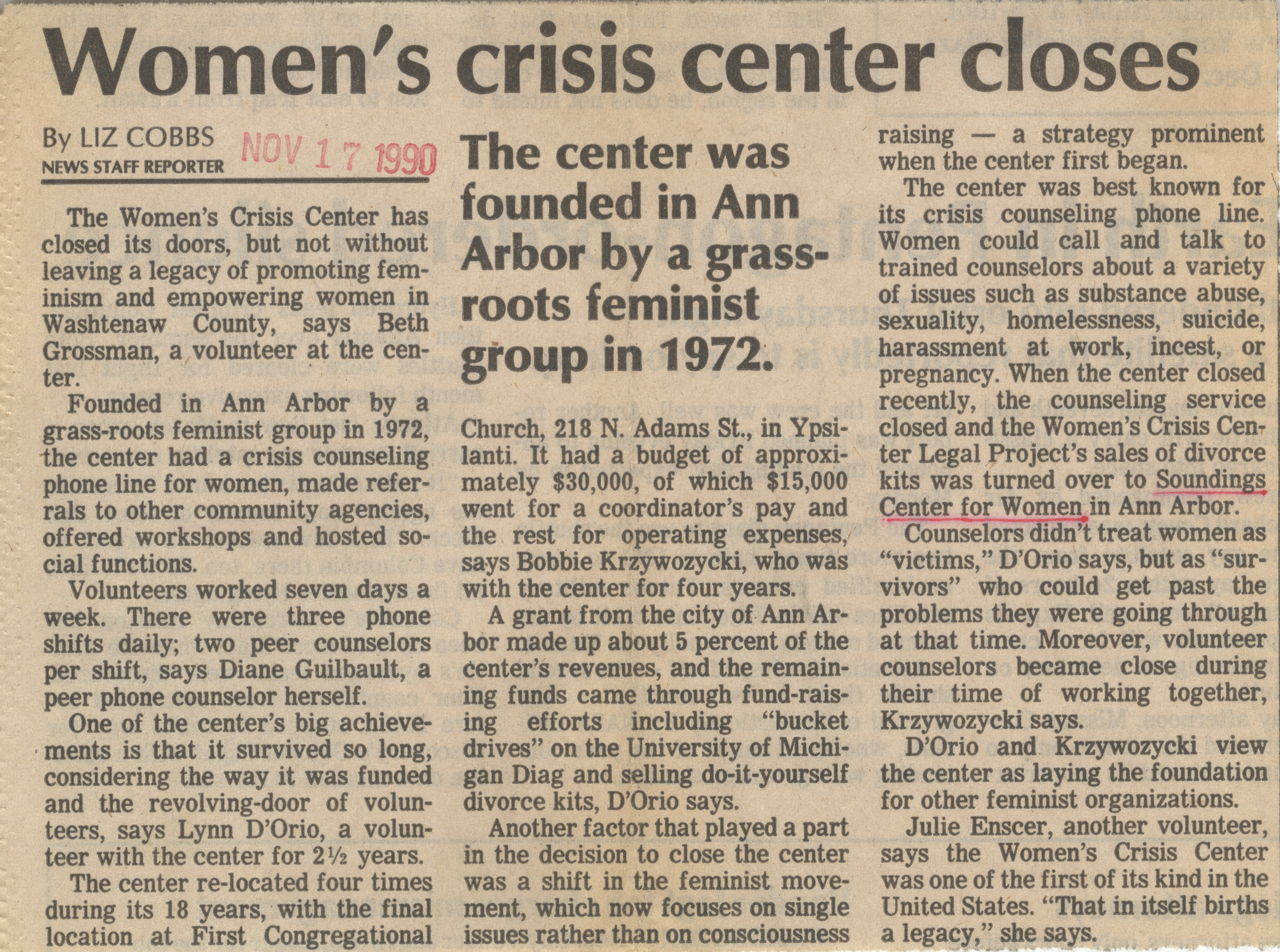 The center was founded in Ann Arbor by a grassroots feminist group in 1972.

The Women’s Crisis Center has closed its doors, but not without leaving a legacy of promoting feminism and empowering women in Washtenaw County, says Beth Grossman, a volunteer at the center.

Founded in Ann Arbor by a grass-roots feminist group in 1972, the center had a crisis counseling phone line for women, made referrals to other community agencies, offered workshops and hosted social functions.

One of the center’s big achievements is that it survived so long, considering the way it was funded and the revolving-door of volunteers, says Lynn D’Orio, a volunteer with the center for 2 1/2 years.

The center re-located four times during its 18 years, with the final location at First Congregational Church, 218 N. Adams St., in Ypsi-lanti. It had a budget of approximately $30,000, of which $15,000 went for a coordinator’s pay and the rest for operating expenses, says Bobbie Krzywozycki, who was with the center for four years.

A grant from the city of Ann Arbor made up about 5 percent of the Center’s revenues, and the remaining funds came through fund-raising efforts including “bucket drives” on the University of Michigan Diag and selling do-it-yourself divorce kits, D’Orio says.

Another factor that played a part in the decision to close the center was a shift in the feminist movement, which now focuses on single issues rather than on consciousness raising — a strategy prominent when the center first began.

The center was best known for its crisis counseling phone line. Women could call and talk to trained counselors about a variety of issues such as substance abuse, sexuality, homelessness, suicide, harassment at work, incest, or pregnancy. When the center closed recently, the counseling service closed and the Women’s Crisis Center Legal Project’s sales of divorce kits was turned over to Soundings Center for Women in Ann Arbor.

Counselors didn’t treat women as “victims,” D’Orio says, but as “survivors” who could get past the problems they were going through at that time. Moreover, volunteer counselors became close during their time of working together, Krzywozycki says.

D’Orio and Krzywozycki view the center as laying the foundation for other feminist organizations.

Julie Enscer, another volunteer, says the Women’s Crisis Center was one of the first of its kind in the United States. “That in itself births a legacy,” she says.