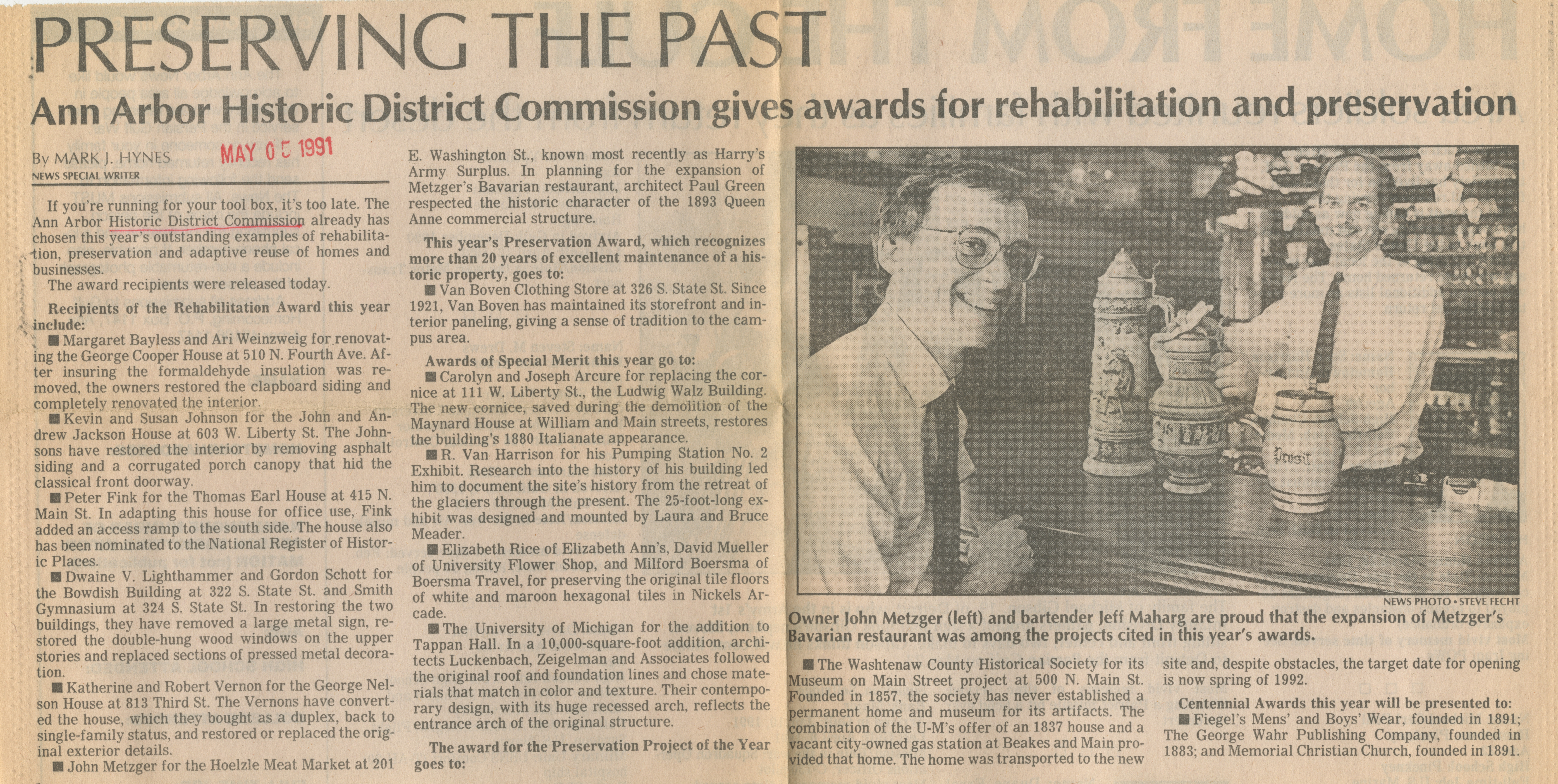 Owner John Metzger (left) and bartender Jeff Maharg are proud that the expansion of Metzger's Bavarian restaurant was among the projects cited in this year's awards.

If you're running for your tool box, it’s too late. The Ann Arbor Historic District Commission already has chosen this year’s outstanding examples of rehabilitation, preservation and adaptive reuse of homes and businesses.

The award recipients were released today.

Recipients of the Rehabilitation Award this year include:

■ Margaret Bayless and Ari Weinzweig for renovating the George Cooper House at 510 N. Fourth Ave. After insuring the formaldehyde insulation was removed, the owners restored the clapboard siding and completely renovated the interior.

■ Kevin and Susan Johnson for the John and Andrew Jackson House at 603 W. Liberty St. The Johnsons have restored the interior by removing asphalt siding and a corrugated porch canopy that hid the classical front doorway.

■ Peter Fink for the Thomas Earl House at 415 N. Main St. In adapting this house for office use, Fink added an access ramp to the south side. The house also has been nominated to the National Register of Historic Places.

■ Dwaine V. Lighthammer and Gordon Schott for the Bowdish Building at 322 S. State St. and Smith Gymnasium at 324 S. State St. In restoring the two buildings, they have removed a large metal sign, restored the double-hung wood windows on the upper stories and replaced sections of pressed metal decoration.

■ Katherine and Robert Vernon for the George Nelson House at 813 Third St. The Vernons have converted the house, which they bought as a duplex, back to single-family status, and restored or replaced the original exterior details.

■ John Metzger for the Hoelzle Meat Market at 201 E. Washington St., known most recently as Harry’s Army Surplus. In planning for the expansion of Metzger’s Bavarian restaurant, architect Paul Green respected the historic character of the 1893 Queen Anne commercial structure.

This year’s Preservation Award, which recognizes more than 20 years of excellent maintenance of a historic property, goes to:

■ Van Boven Clothing Store at 326 S. State St. Since 1921, Van Boven has maintained its storefront and interior paneling, giving a sense of tradition to the campus area.

Awards of Special Merit this year go to:

■ Carolyn and Joseph Arcure for replacing the cornice at 111 W. Liberty St., the Ludwig Walz Building. The new cornice, saved during the demolition of the Maynard House at William and Main streets, restores the building’s 1880 Italianate appearance.

■ R. Van Harrison for his Pumping Station No. 2 Exhibit. Research into the history of his building led him to document the site’s history from the retreat of the glaciers through the present. The 25-foot-long exhibit was designed and mounted by Laura and Bruce Meader.

■ The University of Michigan for the addition to Tappan Hall. In a 10,000-square-foot addition, architects Luckenbach, Zeigelman and Associates followed the original roof and foundation lines and chose materials that match in color and texture. Their contemporary design, with its huge recessed arch, reflects the entrance arch of the original structure.

The award for the Preservation Project of the Year goes to:

■ The Washtenaw County Historical Society for its Museum on Main Street project at 500 N. Main St. Founded in 1857, the society has never established a permanent home and museum for its artifacts. The combination of the U-M’s offer of an 1837 house and a vacant city-owned gas station at Beakes and Main provided that home. The home was transported to the new site and, despite obstacles, the target date for opening is now spring of 1992.

Centennial Awards this year will be presented to: