Garden Show Gets a New Venue 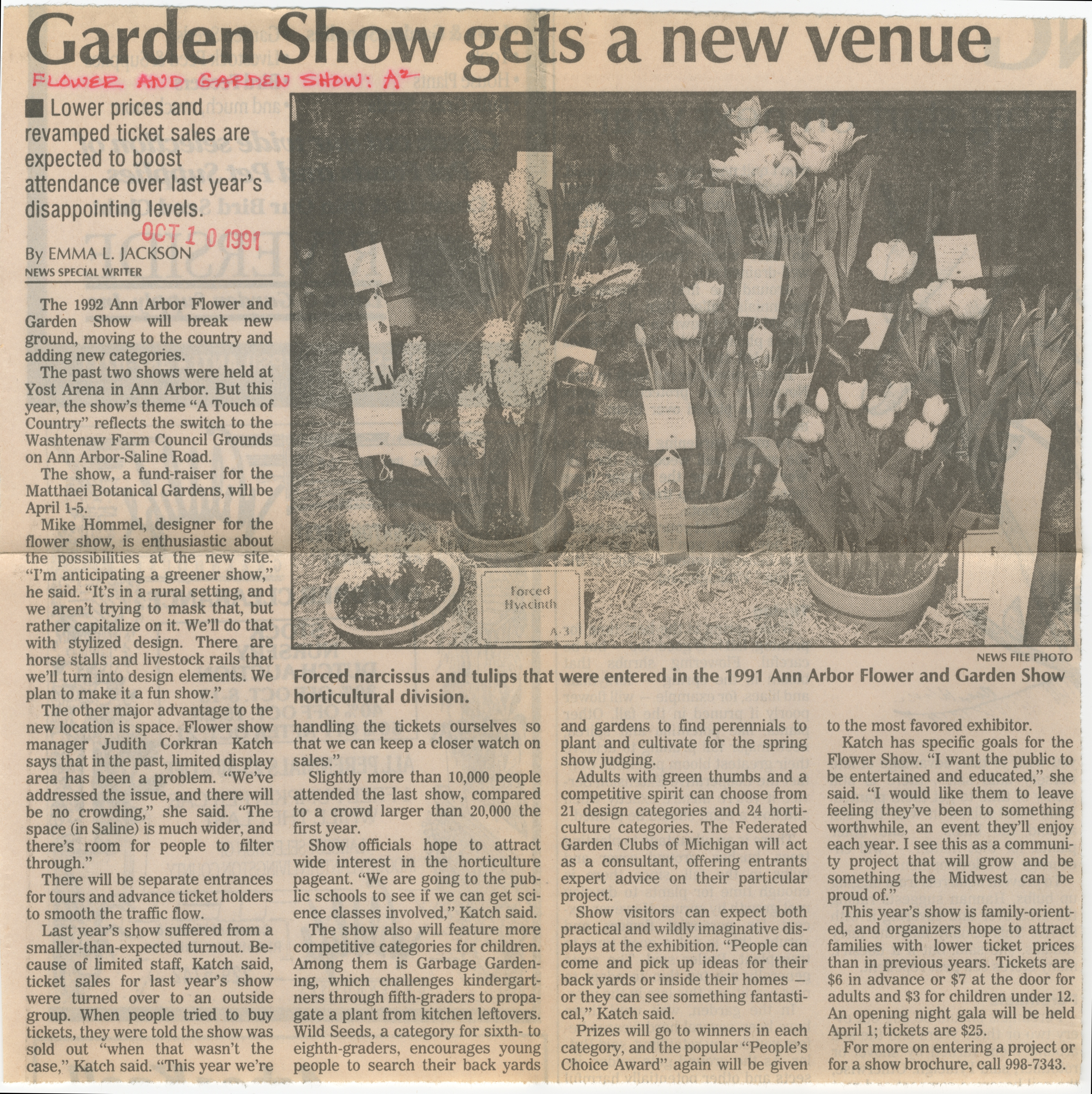 ﻿Garden Show gets a new venue

The 1992 Ann Arbor Flower and Garden Show will break new ground, moving to the country and adding new categories.

The past two shows were held at Yost Arena in Ann Arbor. But this year, the show’s theme “A Touch of Country” reflects the switch to the Washtenaw Farm Council Grounds on Ann Arbor-Saline Road.

The show, a fund-raiser for the Matthaei Botanical Gardens, will be April 1-5.

Mike Hommel, designer for the flower show, is enthusiastic about the possibilities at the new site. “I’m anticipating a greener show,” he said. “It’s in a rural setting, and we aren’t trying to mask that, but rather capitalize on it. We’ll do that with stylized design. There are horse stalls and livestock rails that we’ll turn into design elements. We plan to make it a fun show.”

The other major advantage to the new location is space. Flower show manager Judith Corkran Katch says that in the past, limited display area has been a problem. “We’ve addressed the issue, and there will be no crowding,” she said. “The space (in Saline) is much wider, and there’s room for people to filter through.”

There will be separate entrances for tours and advance ticket holders to smooth the traffic flow.

Last year’s show suffered from a smaller-than-expected turnout. Because of limited staff, Katch said, ticket sales for last year’s show were turned over to an outside group. When people tried to buy tickets, they were told the show was sold out “when that wasn’t the case,” Katch said. “This year we’re handling the tickets ourselves so that we can keep a closer watch on sales.”

Slightly more than 10,000 people attended the last show, compared to a crowd larger than 20,000 the first year.

Show officials hope to attract wide interest in the horticulture pageant. “We are going to the public schools to see if we can get science classes involved,” Katch said.

The show also will feature more competitive categories for children. Among them is Garbage Gardening, which challenges kindergartners through fifth-graders to propagate a plant from kitchen leftovers. Wild Seeds, a category for sixth- to eighth-graders, encourages young people to search their back yards and gardens to find perennials to plant and cultivate for the spring show judging.

Adults with green thumbs and a competitive spirit can choose from 21 design categories and 24 horticulture categories. The Federated Garden Clubs of Michigan will act as a consultant, offering entrants expert advice on their particular project.

Show visitors can expect both practical and wildly imaginative displays at the exhibition. “People can come and pick up ideas for their back yards or inside their homes - or they can see something fantastical,” Katch said.

Prizes will go to winners in each category, and the popular “People’s Choice Award” again will be given to the most favored exhibitor.

Katch has specific goals for the Flower Show. “I want the public to be entertained and educated,” she said. “I would like them to leave feeling they’ve been to something worthwhile, an event they’ll enjoy each year. I see this as a community project that will grow and be something the Midwest can be proud of.”

This year’s show is family-oriented, and organizers hope to attract families with lower ticket prices than in previous years. Tickets are $6 in advance or $7 at the door for adults and $3 for children under 12. An opening night gala will be held April 1; tickets are $25.

Forced narcissus and tulips that were entered in the 1991 Ann Arbor Flower and Garden Show horticultural division.