Sparring with the ultimate powers-that-be 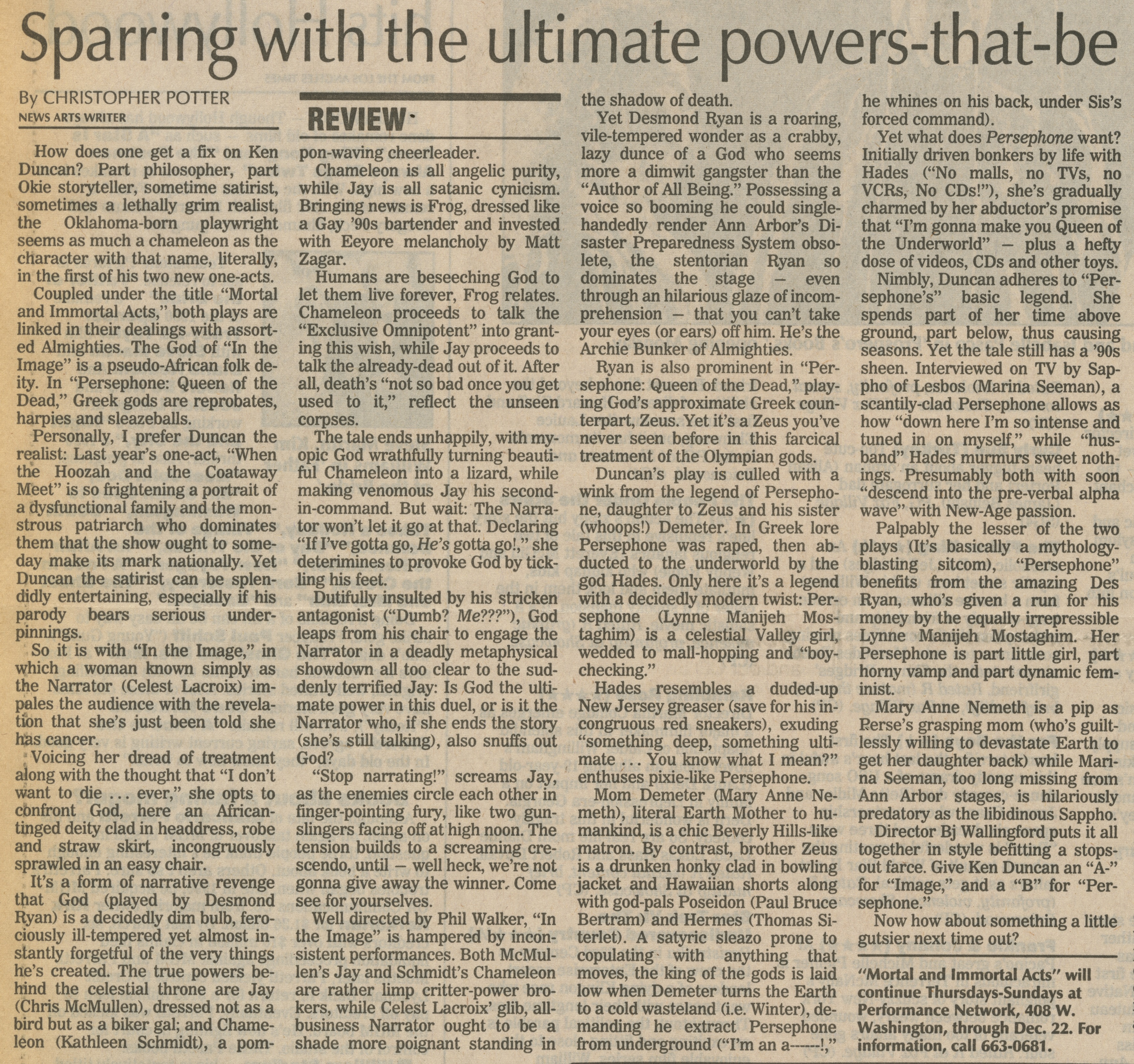 ﻿Sparring with the ultimate powers-that-be

How does one get a fix on Ken Duncan? Part philosopher, part Okie storyteller, sometime satirist, sometimes a lethally grim realist, the Oklahoma-born playwright seems as much a chameleon as the character with that name, literally, in the first of his two new one-acts.

Coupled under the title “Mortal and Immortal Acts,” both plays are linked in their dealings with assorted Almighties. The God of “In the Image” is a pseudo-African folk deity. In “Persephone: Queen of the Dead,” Greek gods are reprobates, harpies and sleazeballs.

Personally, I prefer Duncan the realist: Last year’s one-act, “When the Hoozah and the Coataway Meet” is so frightening a portrait of a dysfunctional family and the monstrous patriarch who dominates them that the show ought to someday make its mark nationally. Yet Duncan the satirist can be splendidly entertaining, especially if his parody bears serious underpinnings.

So it is with “In the Image,” in which a woman known simply as the Narrator (Celest Lacroix) impales the audience with the revelation that she’s just been told she has cancer.

Voicing her dread of treatment along with the thought that “I don’t want to die ... ever,” she opts to cbnfront God, here an African-tinged deity clad in headdress, robe and straw skirt, incongruously sprawled in an easy chair.

It’s a form of narrative revenge that God (played by Desmond Ryan) is a decidedly dim bulb, ferociously ill-tempered yet almost instantly forgetful of the very things he’s created. The true powers behind the celestial throne are Jay (Chris McMullen), dressed not as a bird but as a biker gal; and Chameleon (Kathleen Schmidt), a pom-pom-waving cheerleader.

Chameleon is all angelic purity, while Jay is all satanic cynicism. Bringing news is Frog, dressed like a Gay '90s bartender and invested with Eeyore melancholy by Matt Zagar.

Humans are beseeching God to let them live forever, Frog relates. Chameleon proceeds to talk the “Exclusive Omnipotent” into granting this wish, while Jay proceeds to talk the already-dead out of it. After all, death’s “not so bad once you get used to it,” reflect the unseen corpses.

The tale ends unhappily, with myopic God wrathfully turning beautiful Chameleon into a lizard, while making venomous Jay his second-in-command. But wait: The Narrator won’t let it go at that. Declaring “If I’ve gotta go, He’s gotta go!,” she determines to provoke God by tickling his feet.

Dutifully insulted by his stricken antagonist (“Dumb? Me???”), God leaps from his chair to engage the Narrator in a deadly metaphysical showdown all too clear to the suddenly terrified Jay: Is God the ultimate power in this duel, or is it the Narrator who, if she ends the story (she’s still talking), also snuffs out God?

“Stop narrating!” screams Jay, as the enemies circle each other in finger-pointing fury, like two gunslingers facing off at high noon. The tension builds to a screaming crescendo, until - well heck, we’re not gonna give away the winner. Come see for yourselves.

Well directed by Phil Walker, “In the Image” is hampered by inconsistent performances. Both McMullen’s Jay and Schmidt’s Chameleon are rather limp critter-power brokers, while Celest Lacroix’ glib, all-business Narrator ought to be a shade more poignant standing in the shadow of death.

Yet Desmond Ryan is a roaring, vile-tempered wonder as a crabby, lazy dunce of a God who seems more a dimwit gangster than the “Author of All Being.” Possessing a voice so booming he could single-handedly render Ann Arbor’s Disaster Preparedness System obsolete, the stentorian Ryan so dominates the stage - even through an hilarious glaze of incomprehension - that you can’t take your eyes (or ears) off him. He’s the Archie Bunker of Almighties.

Ryan is also prominent in “Persephone: Queen of the Dead,” playing God’s approximate Greek counterpart, Zeus. Yet it’s a Zeus you’ve never seen before in this farcical treatment of the Olympian gods.

Duncan’s play is culled with a wink from the legend of Persephone, daughter to Zeus and his sister (whoops!) Demeter. In Greek lore Persephone was raped, then abducted to the underworld by the god Hades. Only here it’s a legend with a decidedly modem twist: Persephone (Lynne Manijeh Mos-taghim) is a celestial Valley girl, wedded to mall-hopping and “boychecking.”

Hades resembles a duded-up New Jersey greaser (save for his incongruous red sneakers), exuding “something deep, something ultimate ... You know what I mean?” enthuses pixie-like Persephone.

Mom Demeter (Mary Anne Nemeth), literal Earth Mother to humankind, is a chic Beverly Hills-like matron. By contrast, brother Zeus is a drunken honky clad in bowling jacket and Hawaiian shorts along with god-pals Poseidon (Paul Bruce Bertram) and Hermes (Thomas Si-terlet). A satyric sleazo prone to copulating with anything that moves, the king of the gods is laid low when Demeter turns the Earth to a cold wasteland (i.e. Winter), demanding he extract Persephone from underground (“I’m an a---!,” he whines on his back, under Sis’s forced command).

Yet what does Persephone want? Initially driven bonkers by life with Hades (“No malls, no TVs, no VCRs, No CDs!”), she’s gradually charmed by her abductor’s promise that “I’m gonna make you Queen of the Underworld” - plus a hefty dose of videos, CDs and other toys.

Nimbly, Duncan adheres to “Persephone’s” basic legend. She spends part of her time above ground, part below, thus causing seasons. Yet the tale still has a ’90s sheen. Interviewed on TV by Sappho of Lesbos (Marina Seeman), a scantily-clad Persephone allows as how “down here I’m so intense and tuned in on myself,” while “husband” Hades murmurs sweet nothings. Presumably both with soon “descend into the pre-verbal alpha wave” with New-Age passion.

Palpably the lesser of the two plays (It’s basically a mythologyblasting sitcom), “Persephone” benefits from the amazing Des Ryan, who’s given a run for his money by the equally irrepressible Lynne Manijeh Mostaghim. Her Persephone is part little girl, part homy vamp and part dynamic feminist.

Mary Anne Nemeth is a pip as Perse’s grasping mom (who’s guiltlessly willing to devastate Earth to get her daughter back) while Marina Seeman, too long missing from Ann Arbor stages, is hilariously predatory as the libidinous Sappho.

Director Bj Wallingford puts it all together in style befitting a stops-out farce. Give Ken Duncan an “A-” for “Image,” and a “B” for “Persephone.”

Now how about something a little gutsier next time out?