At 90, GOP Stalwart Shows No Signs Of Slowing Down 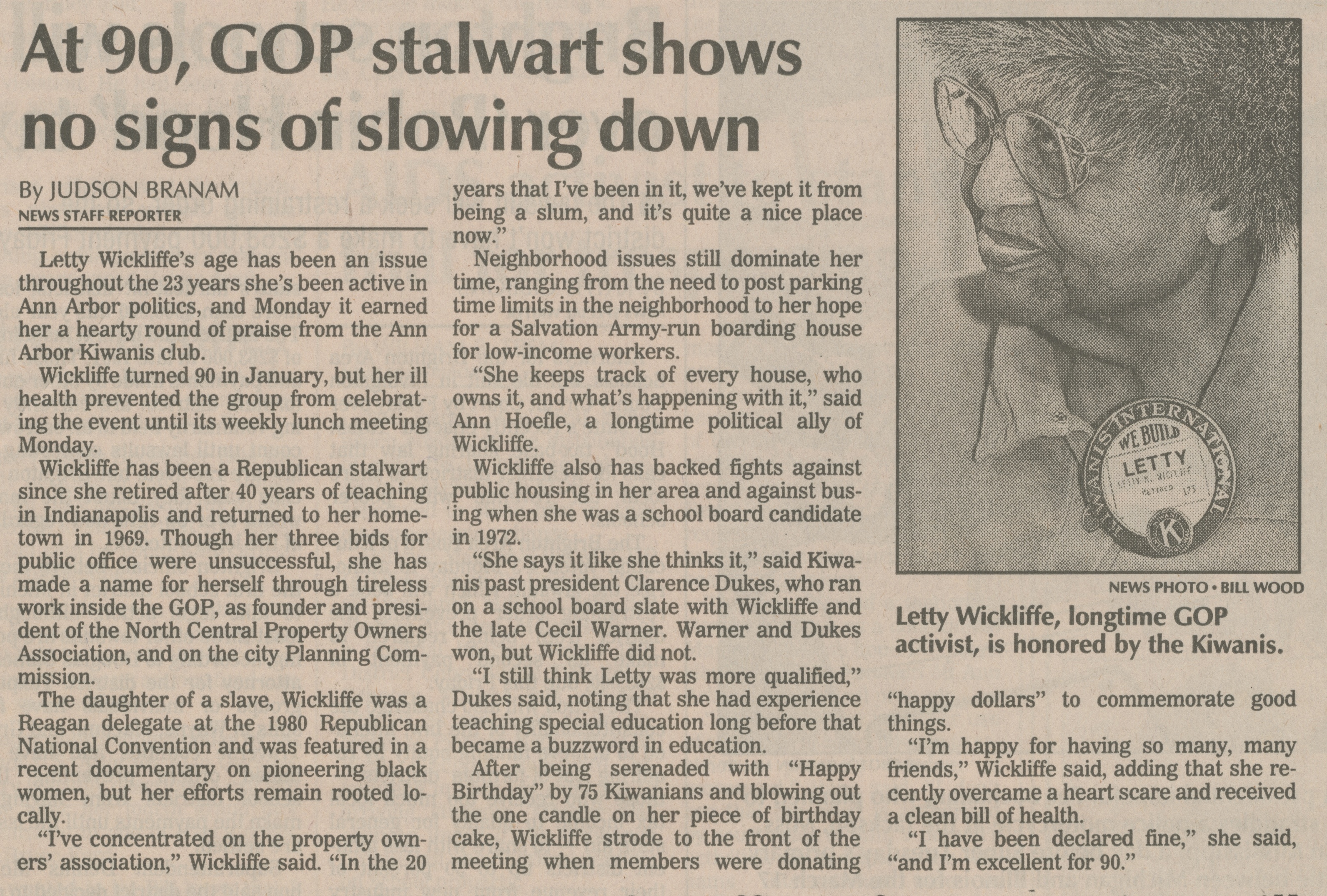 ﻿At 90, GOP stalwart shows no signs of slowing down

Letty Wickliffe’s age has been an issue throughout the 23 years she’s been active in Ann Arbor politics, and Monday it earned her a hearty round of praise from the Ann Arbor Kiwanis club.

Wickliffe turned 90 in January, but her ill health prevented the group from celebrating the event until its weekly lunch meeting Monday.

Wickliffe has been a Republican stalwart since she retired after 40 years of teaching in Indianapolis and returned to her hometown in 1969. Though her three bids for public office were unsuccessful, she has made a name for herself through tireless work inside the GOP, as founder and president of the North Central Property Owners Association, and on the city Planning Commission.

The daughter of a slave, Wickliffe was a Reagan delegate at the 1980 Republican National Convention and was featured in a recent documentary on pioneering black women, but her efforts remain rooted locally.

“I’ve concentrated on the property owners’ association,” Wickliffe said. “In the 20 years that I’ve been in it, we’ve kept it from being a slum, and it’s quite a nice place now.”

Neighborhood issues still dominate her time, ranging from the need to post parking time limits in the neighborhood to her hope for a Salvation Army-run boarding house for low-income workers.

“She keeps track of every house, who owns it, and what’s happening with it,” said Ann Hoefle, a longtime political ally of Wickliffe.

Wickliffe also has backed fights against public housing in her area and against busing when she was a school board candidate in 1972.

“She says it like she thinks it,” said Kiwanis past president Clarence Dukes, who ran on a school board slate with Wickliffe and the late Cecil Warner. Warner and Dukes won, but Wickliffe did not.

“I still think Letty was more qualified,” Dukes said, noting that she had experience teaching special education long before that became a buzzword in education.

After being serenaded with “Happy Birthday” by 75 Kiwanians and blowing out the one candle on her piece of birthday cake, Wickliffe strode to the front of the meeting when members were donating

Letty Wickliffe, longtime GOP activist, is honored by the Kiwanis.

“I’m happy for having so many, many friends,” Wickliffe said, adding that she recently overcame a heart scare and received a clean bill of health.