You Can Do A Divorce Yourself 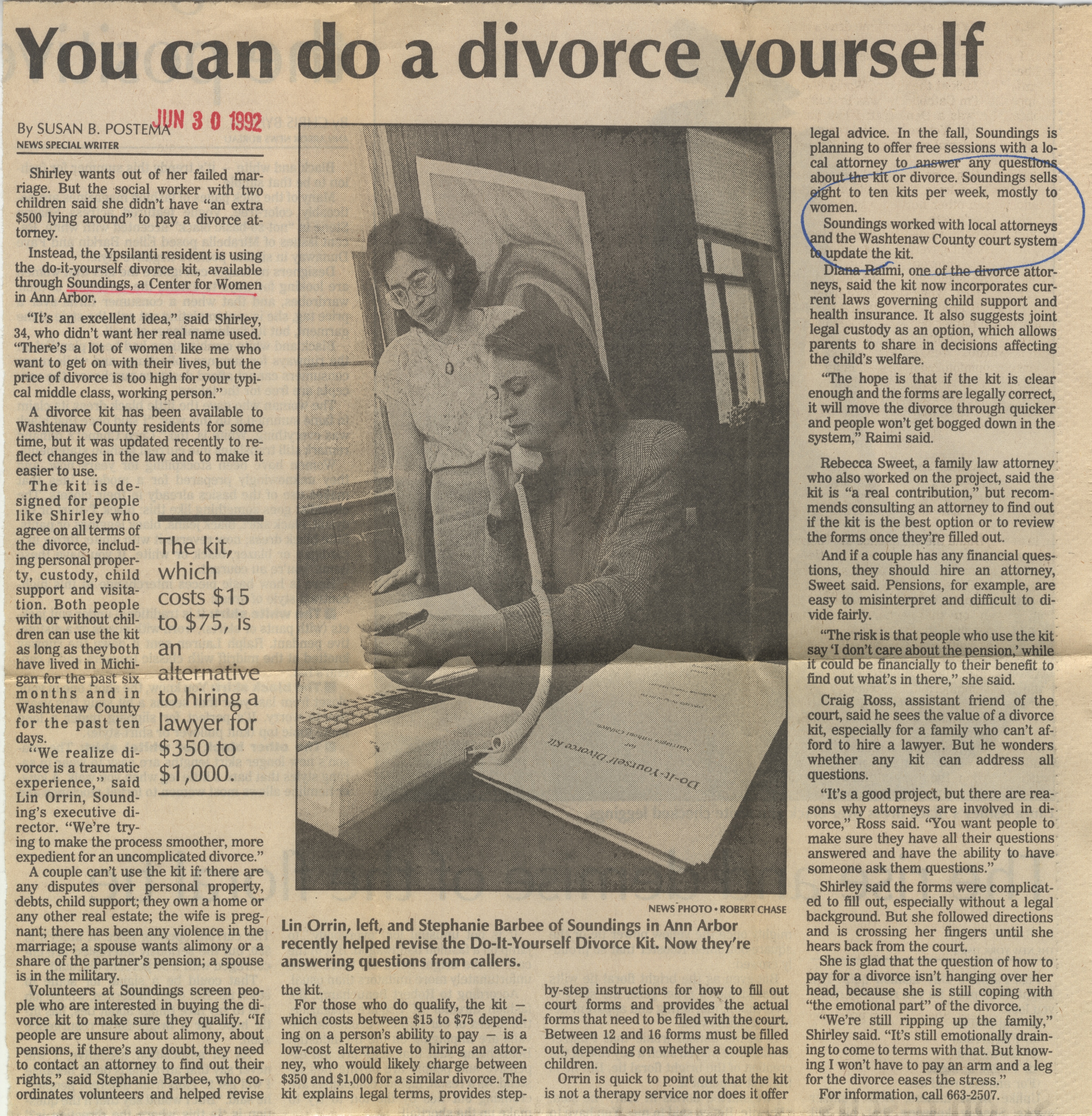 ﻿You can do a divorce yourself

Shirley wants out of her failed marriage. But the social worker with two children said she didn’t have “an extra $500 lying around” to pay a divorce attorney.

Instead, the Ypsilanti resident is using the do-it-yourself divorce kit, available through Soundings, a Center for Women in Ann Arbor. *

“It’s an excellent idea,” said Shirley, 34, who didn’t want her real name used. “There’s a lot of women like me who want to get on with their lives, but the price of divorce is too high for your typical middle class, working person.”

A divorce kit has been available to Washtenaw County residents for some time, but it was updated recently to reflect changes in the law and to make it easier to use.

The kit is designed for people like Shirley who agree on all terms of the divorce, including personal property, custody, child support and visitation. Both people with or without children can use the kit as long as they both have lived in Michigan for the past six months and in Washtenaw County for the past ten days.

A couple can’t use the kit if: there are any disputes over personal property, debts, child support; they own a home or any other real estate; the wife is pregnant; there has been any violence in the marriage; a spouse wants alimony or a share of the partner’s pension; a spouse is in the military.

Volunteers at Soundings screen people who are interested in buying the divorce kit to make sure they qualify. “If people are unsure about alimony, about pensions, if there’s any doubt, they need to contact an attorney to find out their rights,” said Stephanie Barbee, who coordinates volunteers and helped revise the kit.

For those who do qualify, the kit -- which costs between $15 to $75 depending on a person’s ability to pay -- is a low-cost alternative to hiring an attorney, who would likely charge between $350 and $1,000 for a similar divorce. The kit explains legal terms, provides step-by-step instructions for how to fill out court forms and provides the actual forms that need to be filed with the court. Between 12 and 16 forms must be filled out, depending on whether a couple has children.

Orrin is quick to point out that the kit is not a therapy service nor does it offer legal advice. In the fall, Soundings is planning to offer free sessions with a local attorney to answer any questions about the kit or divorce. Soundings sells eight to ten kits per week, mostly to women.

Soundings worked with local attorneys and the Washtenaw County court system to update the kit.

Diana Raimi, one of the divorce attorneys, said the kit now incorporates current laws governing child support and health insurance. It also suggests joint legal custody as an option, which allows parents to share in decisions affecting the child’s welfare.

“The hope is that if the kit is clear enough and the forms are legally correct, it will move the divorce through quicker and people won’t get bogged down in the system,” Raimi said.

Rebecca Sweet, a family law attorney who also worked on the project, said the kit is “a real contribution,” but recommends consulting an attorney to find out if the kit is the best option or to review the forms once they’re filled out.

And if a couple has any financial questions, they should hire an attorney, Sweet said. Pensions, for example, are easy to misinterpret and difficult to divide fairly.

“The risk is that people who use the kit say ‘I don’t care about the pension,’ while it could be financially to their benefit to find out what’s in there,” she said.

Craig Ross, assistant friend of the court, said he sees the value of a divorce kit, especially for a family who can’t afford to hire a lawyer. But he wonders whether any kit can address all questions.

“It’s a good project, but there are reasons why attorneys are involved in divorce,” Ross said. “You want people to make sure they have all their questions answered and have the ability to have someone ask them questions.”

Shirley said the forms were complicated to fill out, especially without a legal background. But she followed directions and is crossing her fingers until she hears back from the court.

She is glad that the question of how to pay for a divorce isn’t hanging over her head, because she is still coping with “the emotional part” of the divorce.

“We’re still ripping up the family,” Shirley said. “It’s still emotionally draining to come to terms with that. But knowing I won’t have to pay an arm and a leg for the divorce eases the stress.”