This Brew's By You 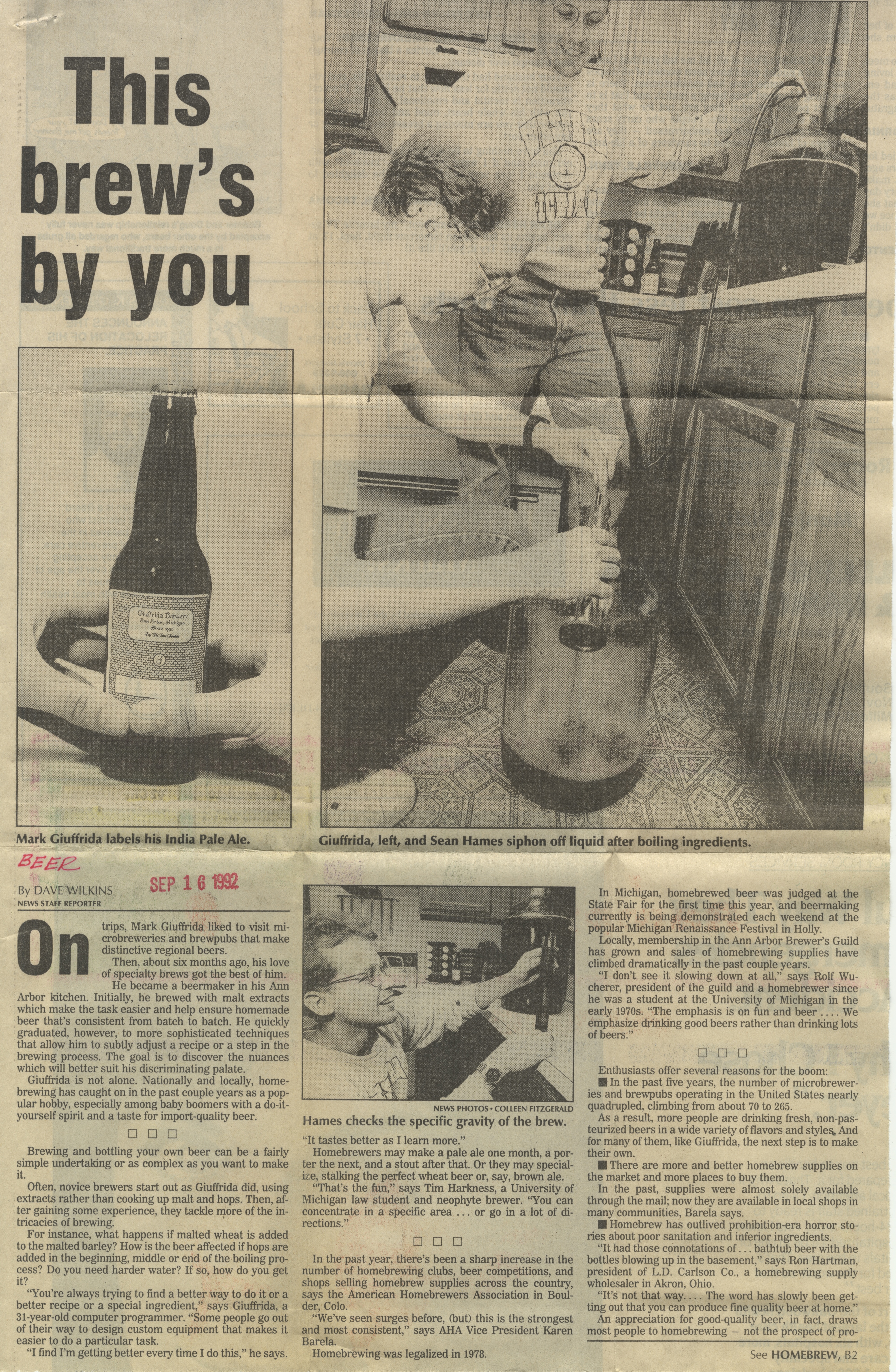 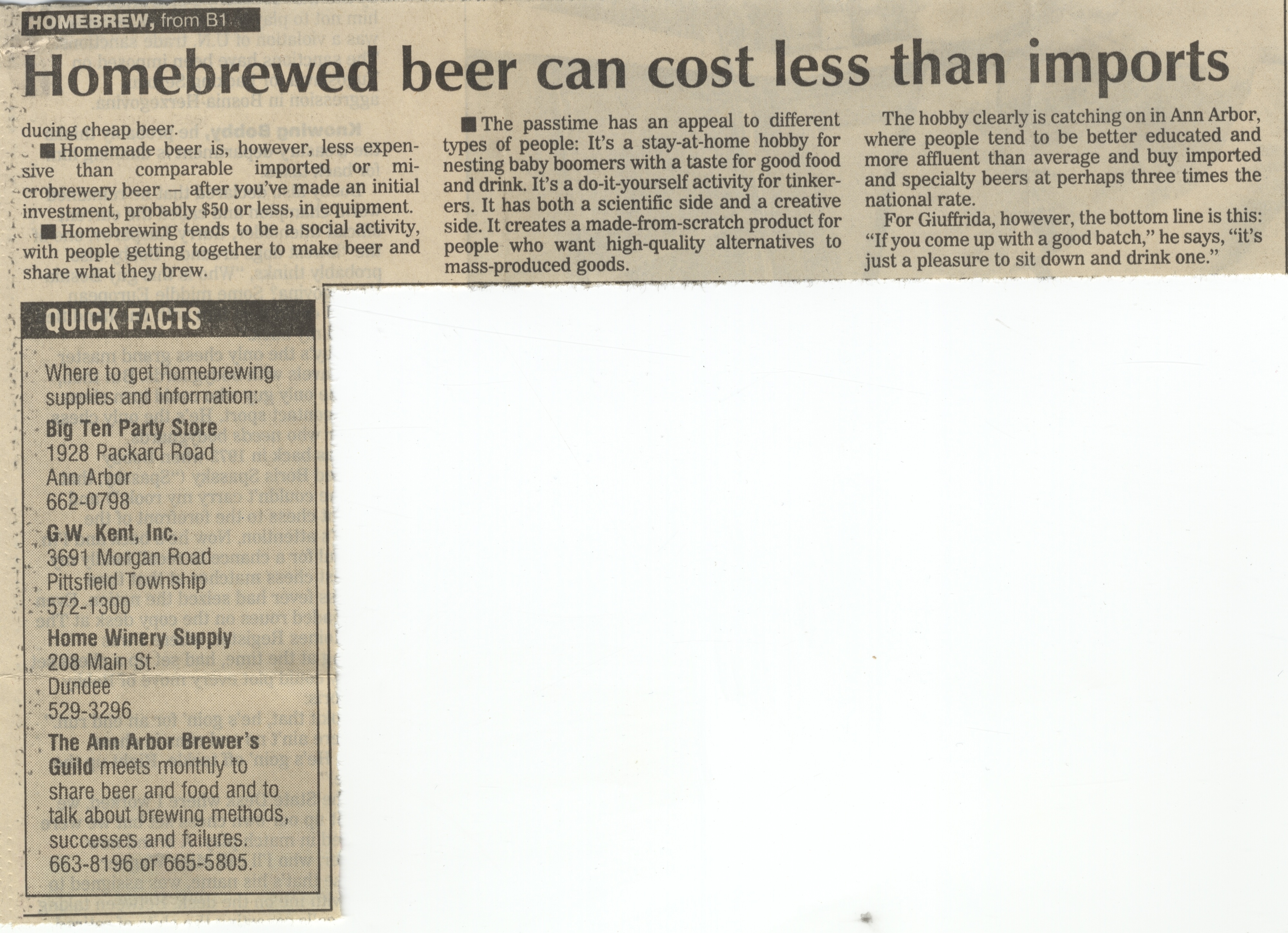 In the past five years, the number of microbrewer-
brewing has caught on in the past couple years as a pop- ._ f ' _ ‘ ' "_' Qf ‘ ' ' if '__'_ _= '_-___ _ ies and brewpubs operating in the United States nearly
ular hobby, especially among baby boomers with a do-it- _ NEWS moms . COLLEEN F|TZGERALD quadrupled, climbing from about 70 to 265. '
yourself spirit and a taste for import-quality beer. Hames Checks the specific gravity of the brew As a result, more people are drinking fresh, non-pas-_
E U E] teurized beers in a wide variety of flavors and styles, And
‘flt tastes better as I learn more.” for many of them, like Giuffrida, the next step is to make _
Brewing and bottling your own beer can be a fairly Homebrewers may make a pale ale one month, a por- their own. '
simple undertaking or as complex as you want to make ter the next, and a stout after that. Or they may special- l There are more and better homebrew supplies on
1t. ize, stalking the perfect wheat beer or, say, brown ale. the market and more places to buy them. _
Often novice brewers start out as Giuffrida did usin “That’s the fun,”_sa s Tim Harkness, a Universi of In the ast, su lies were almost solel available
, a , Q 0 ' ` 1 - I n s
extracts rather than cooking up malt and hops. Then, af- Michigan law student and neophyte brewer. “You can through the mail; now they are available in local shops in
ter gaining some experience, they tackle more of the in- concentrate in al specific area or go in a lot of di- many communities, Barela says.
tricacies of brewing. rections.” l Homebrew has outlived prohibition-era horror sto-
For instance, what ha ens if malted wheat is added. . ~ g; I ~ ' I`1€S_ about oor sanitation and inferior in edients.
_ . _ I [jj [] lj _ __ _ _ _ _ _
to the malted barley? How is the beeraffected if hops are _ _ = _ It had those connotations of _ _ _ bathtub beer with the
added in the beginning, middle or end of theboiling pro- In the"_past_ year, _tliere’s been a sharpfincrease in the bottles blowing up in the basement,” says Ron Hartman,
cess? Do you need harder water? If so, how do you get number ofhomebrewing clubs, beer competitions, and president of L.D. Carlson Co., a homebrewing supply
it? - _ _ _ _ _ _ _ shops selling homebrew 'suppliesacross the country, wholesaler in Akron, Ohio. _
“You’re always trying to find a better way to do 'it or a _ says the American Homebrewers Association in Boul- “It’s not that way .... The word has slowly been get-
better recipe or a special ingredient,” _says Giuffrida, a ' 'der,'Colo.~‘ ' _ _ ting out that you can produce fine quality beer at home.”
31-year-old computer programmer. “Some people go out _“We’ve _seensurges before, (but) this is the strongest An appreciation for good-quality beer, in fact, draws
of their way to design custom equipment that makes it _ and most consistent,” says AHA Vice President Karen most people to homebrewmg - not the prospect of pro-
easier to do a particular task. i Barela. Q _ _ _
“I find I’m getting better every time I do this,” he says. 'Homebrewing' was legalized in 1978. See HOMEBREW, B2 _
Homebrewed beer can o st less than I mports
" ducing cheap beer. A if . I The passtime has *an appeal to different I The hobby clearlyiscatching on inAnnArbor,
J I Homemade beer is, however, less expen- types of people: It’s astay-at-home hobby for where people tend to be better educated and
*jsive than _comparable imported _or mi- nesting baby boomers with a taste for good food more affluent than average and buy imported
i crobrewery beer -f after you’ve made _an initial and drink It’s a do-it-yourself activity for tinker- _and specialty beers at perhaps 'three times the
pinvestment, probably $50 or less, in equipment. ers. It has both a scientihc side and a creative national rate. I I
Q, __ l_ Homebrewing _tends to be a social activity, side. It creates a made-from-scratch pmuct for For Giuffrida, however, the bottom line is this:
_'with people getting together to make beer and people- who want high-quality alternatives to “If you come up with a good batch,” he says, “it’s
'_ share what they_brew. _ _ mass-produced goods- l - _ just a pleasure to sit down and drink one.” “