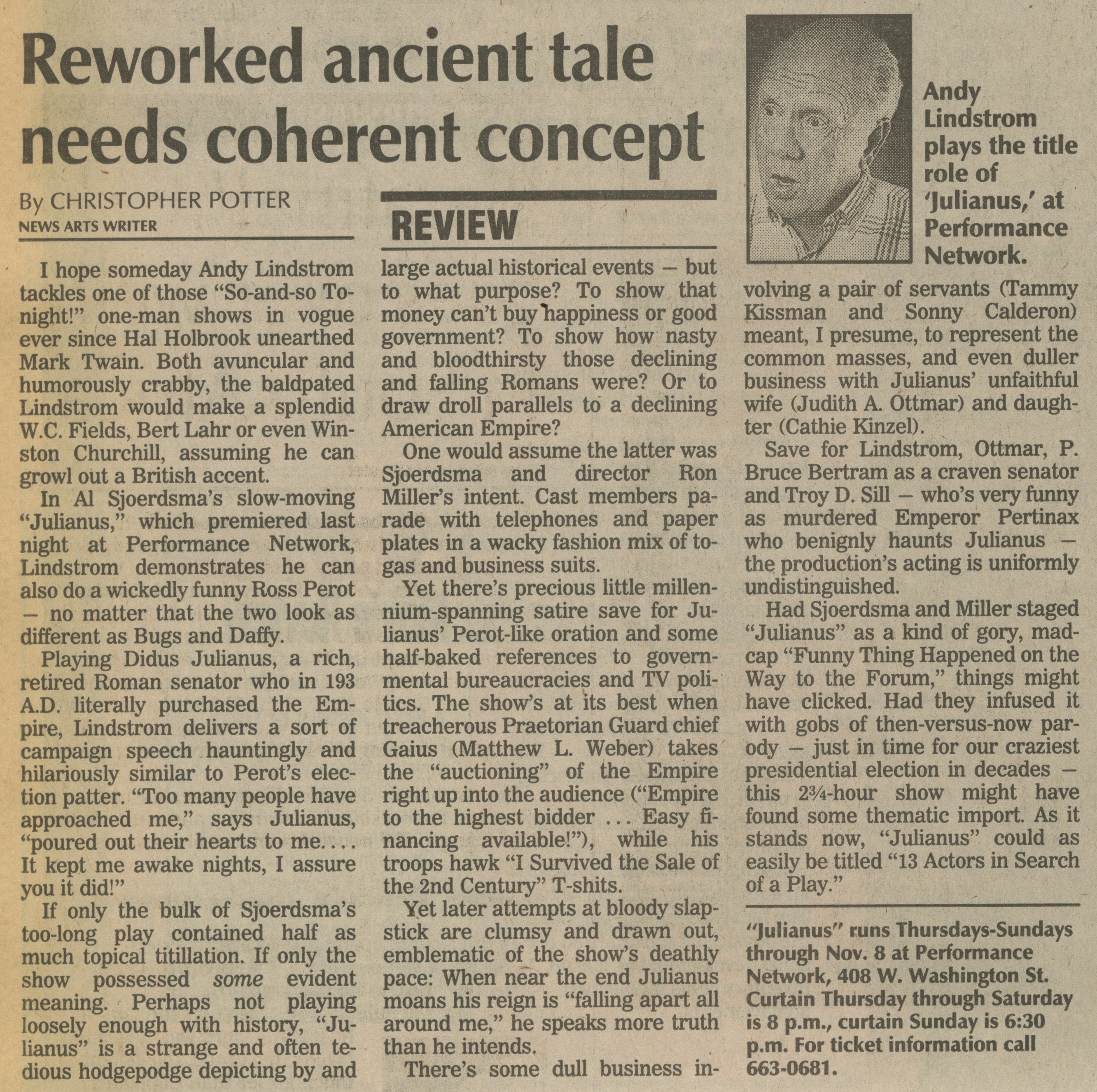 I hope someday Andy Lindstrom tackles one of those “So-and-so Tonight!” one-man shows in vogue ever since Hal Holbrook unearthed Mark Twain. Both avuncular and humorously crabby, the baldpated Lindstrom would make a splendid W.C. Fields, Bert Lahr or even Winston Churchill, assuming he can growl out a British accent.

In Al Sjoerdsma’s slow-moving “Julianus,” which premiered last night at Performance Network, Lindstrom demonstrates he can also do a wickedly funny Ross Perot -...- no matter that the two look as different as Bugs and Daffy.

Playing Didus Julianus, a rich, retired Roman senator who in 193 A.D. literally purchased the Empire, Lindstrom delivers a sort of campaign speech hauntingly and hilariously similar to Perot’s election patter. “Too many people have approached me,” says Julianus, “poured out their hearts to me...It kept me awake nights, I assure you it did!”

If only the bulk of Sjoerdsma’s too-long play contained half as much topical titillation. If only the show possessed some evident meaning. Perhaps not playing loosely enough with history, “Julianus” is a strange and often tedious hodgepodge depicting by and large actual historical events -- but to what purpose? To show that money can’t buy happiness or good government? To show how nasty and bloodthirsty those declining and falling Romans were? Or to draw droll parallels to a declining American Empire?

One would assume the latter was Sjoerdsma and director Ron Miller’s intent. Cast members parade with telephones and paper plates in a wacky fashion mix of togas and business suits.

Yet there’s precious little millennium-spanning satire save for Julianus’ Perot-like oration and some half-baked references to governmental bureaucracies and TV politics. The show’s at its best when treacherous Praetorian Guard chief Gaius (Matthew L. Weber) takes the “auctioning” of the Empire right up into the audience (“Empire to the highest bidder...Easy financing available!”), while his troops hawk “I Survived the Sale of the 2nd Century” T-shirts.

Yet later attempts at bloody slapstick are clumsy and drawn out, emblematic of the show’s deathly pace: When near the end Julianus moans his reign is “falling apart all around me,” he speaks more truth than he intends.

There’s some dull business involving a pair of servants (Tammy Kissman and Sonny Calderon) meant, I presume, to represent the common masses, and even duller business with Julianus’ unfaithful wife (Judith A. Ottmar) and daughter (Cathie Kinzel).

Had Sjoerdsma and Miller staged “Julianus” as a kind of gory, madcap “Funny Thing Happened on the Way to the Forum,” things might have clicked. Had they infused it with gobs of then-versus-now parody -- just in time for our craziest presidential election in decades -- this 2 3/4-hour show might have found some thematic import. As it stands now, “Julianus” could as easily be titled “13 Actors in Search of a Play.”