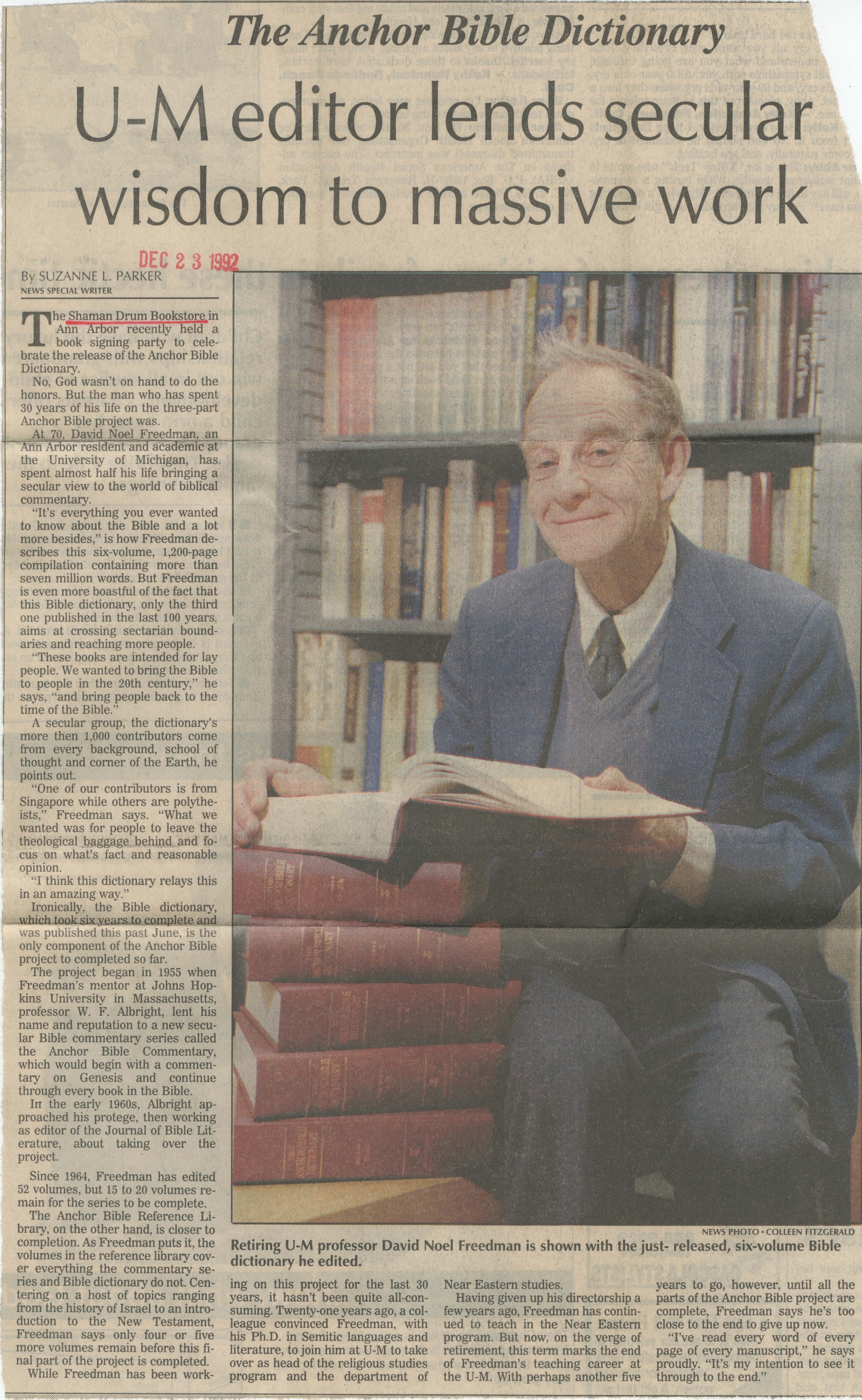 The Shaman Drum Bookstore in Ann Arbor recently held a book signing party to celebrate the release of the Anchor Bible Dictionary.

No, God wasn’t on hand to do the honors. But the man who has spent 30 years of his life on the three-part Anchor Bible project was.

At 70, David Noel Freedman, an Ann Arbor resident and academic at the University of Michigan, has spent almost half his life bringing a secular view to the world of biblical commentary.

“It’s everything you ever wanted to know about the Bible and a lot more besides,” is how Freedman describes this six-volume, 1,200-page compilation containing more than seven million words. But Freedman is even more boastful of the fact that this Bible dictionary, only the third one published in the last 100 years, aims at crossing sectarian boundaries and reaching more people.

"These books are intended for lay people. We wanted to bring the Bible to people in the 20th century,” he says, “and bring people back to the time of the Bible.”

A secular group, the dictionary’s more then 1,000 contributors come from every background, school of thought and comer of the Earth, he points out.

“One of our contributors is from Singapore while others are polytheists,” Freedman says. “What we wanted was for people to leave the theological baggage behind and focus on what’s fact and reasonable opinion.

“I think this dictionary relays this in an amazing way.”

Ironically, the Bible dictionary, which took six years to complete and was published this past June, is the only component of the Anchor Bible project to completed so far.

The project began in 1955 when Freedman’s mentor at Johns Hopkins University in Massachusetts, professor W. F. Albright, lent his name and reputation to a new secular Bible commentary series called the Anchor Bible Commentary, which would begin with a commentary on Genesis and continue through every book in the Bible.

In the early 1960s, Albright approached his protege, then working as editor of the Journal of Bible Literature, about taking over the project.

The Anchor Bible Reference Library, on the other hand, is closer to completion. As Freedman puts it, the volumes in the reference library cover everything the commentary series and Bible dictionary do not. Centering on a host of topics ranging from the history of Israel to an introduction to the New Testament, Freedman says only four or five more volumes remain before this final part of the project is completed. While Freedman has been working on this project for the last 30 years, it hasn’t been quite all-consuming. Twenty-one years ago, a colleague convinced Freedman, with his Ph.D. in Semitic languages and literature, to join him at U-M to take over as head of the religious studies program and the department of Near Eastern studies.

Having given up his directorship a few years ago, Freedman has continued to teach in the Near Eastern program. But now, on the verge of retirement, this term marks the end of Freedman’s teaching career at the U-M. With perhaps another five years to go, however, until all the parts of the Anchor Bible project are complete, Freedman says he’s too close to the end to give up now.

“I’ve read every word of every page of every manuscript,” he says proudly. “It’s my intention to see it through to the end.”