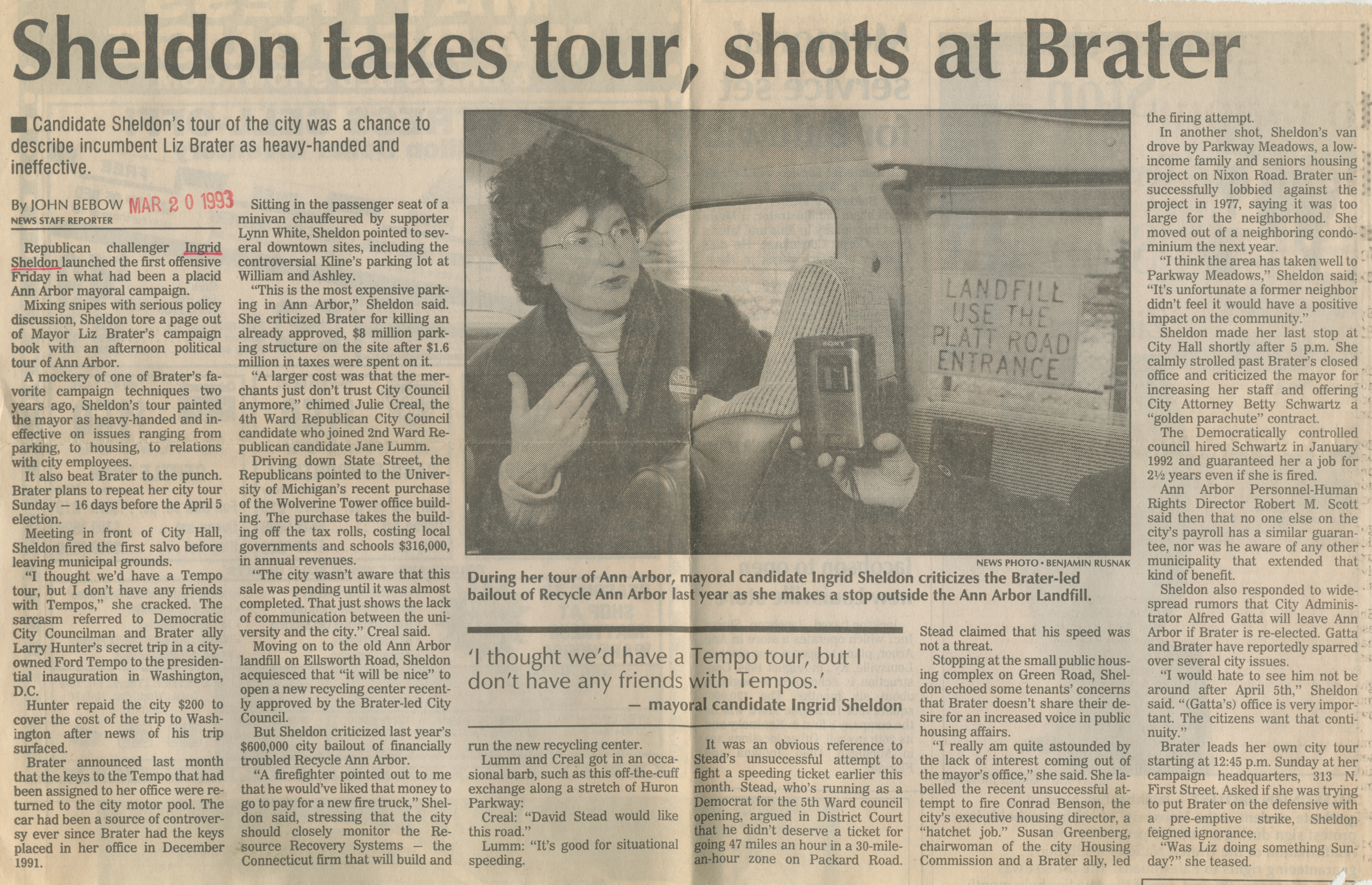 ■ Candidate Sheldon’s tour of the city was a chance to describe incumbent Liz Brater as heavy-handed and ineffective.

Republican challenger Ingrid Sheldon launched the first offensive Friday in what had been a placid Ann Arbor mayoral campaign.

A mockery of one of Brater’s favorite campaign techniques two years ago, Sheldon’s tour painted the mayor as heavy-handed and ineffective on issues ranging from parking, to housing, to relations with city employees.

It also beat Brater to the punch. Brater plans to repeat her city tour Sunday - 16 days before the April 5 election.

“I thought we’d have a Tempo tour, but I don’t have any friends with Tempos,” she cracked. The sarcasm referred to Democratic City Councilman and Brater ally Larry Hunter’s secret trip in a city-owned Ford Tempo to the presidential inauguration in Washington, D.C.

Hunter repaid the city $200 to cover the cost of the trip to Washington after news of his trip surfaced.

Brater announced last month that the keys to the Tempo that had been assigned to her office were returned to the city motor pool. The car had been a source of controversy ever since Brater had the keys placed in her office in December 1991.

Sitting in the passenger seat of a minivan chauffeured by supporter Lynn White, Sheldon pointed to several downtown sites, including the controversial Kline’s parking lot at William and Ashley.

“This is the most expensive parking in Ann Arbor,” Sheldon said. She criticized Brater for killing an already approved, $8 million parking structure on the site after $1.6 million in taxes were spent on it.

Driving down State Street, the Republicans pointed to the University of Michigan’s recent purchase of the Wolverine Tower office building. The purchase takes the building off the tax rolls, costing local governments and schools $316,000, in annual revenues.

“The city wasn’t aware that this sale was pending until it was almost completed. That just shows the lack of communication between the university and the city.” Creal said.

Moving on to the old Ann Arbor landfill on Ellsworth Road, Sheldon acquiesced that “it will be nice” to open a new recycling center recently approved by the Brater-led City Council.

“A firefighter pointed out to me that he would’ve liked that money to go to pay for a new fire truck,” Sheldon said, stressing that the city should closely monitor the Resource Recovery Systems - the Connecticut firm that will build and run the new recycling center.

Lumm and Creal got in an occasional barb, such as this off-the-cuff exchange along a stretch of Huron Parkway:

It was an obvious reference to Stead’s unsuccessful attempt to fight a speeding ticket earlier this month. Stead, who’s running as a Democrat for the 5th Ward council opening, argued in District Court that he didn’t deserve a ticket for going 47 miles an hour in a 30-mile-an-hour zone on Packard Road.

Stead claimed that his speed was not a threat.

Stopping at the small public housing complex on Green Road, Sheldon echoed some tenants’ concerns that Brater doesn’t share their desire for an increased voice in public housing affairs.

“I really am quite astounded by the lack of interest coming out of the mayor’s office,” she said. She labelled the recent unsuccessful attempt to fire Conrad Benson, the city’s executive housing director, a “hatchet job.” Susan Greenberg, chairwoman of the city Housing Commission and a Brater ally, led the firing attempt.

In another shot, Sheldon’s van drove by Parkway Meadows, a low-income family and seniors housing project on Nixon Road. Brater unsuccessfully lobbied against the project in 1977, saying it was too large for the neighborhood. She moved out of a neighboring condominium the next year.

“I think the area has taken well to Parkway Meadows,” Sheldon said. “It’s unfortunate a former neighbor didn’t feel it would have a positive impact on the community.”

Sheldon made her last stop at City Hall shortly after 5 p.m. She calmly strolled past Brater’s closed office and criticized the mayor for increasing her staff and offering City Attorney Betty Schwartz a “golden parachute” contract.

The Democratically controlled council hired Schwartz in January 1992 and guaranteed her a job for 2 1/2 years even if she is fired.

Ann Arbor Personnel-Human Rights Director Robert M. Scott said then that no one else on the city’s payroll has a similar guarantee, nor was he aware of any other municipality that extended that kind of benefit.

“I would hate to see him not be around after April 5th,” Sheldon said. “(Gatta’s) office is very important. The citizens want that continuity.”

Brater leads her own city tour starting at 12:45 p.m. Sunday at her campaign headquarters, 313 N. First Street. Asked if she was trying to put Brater on the defensive with a pre-emptive strike, Sheldon feigned ignorance.

“Was Liz doing something Sunday?” she teased.

During her tour of Ann Arbor, mayoral candidate Ingrid Sheldon criticizes the Brater-led bailout of Recycle Ann Arbor last year as she makes a stop outside the Ann Arbor Landfill.

'I thought we'd have a Tempo tour, but I don't have any friends with Tempos.'