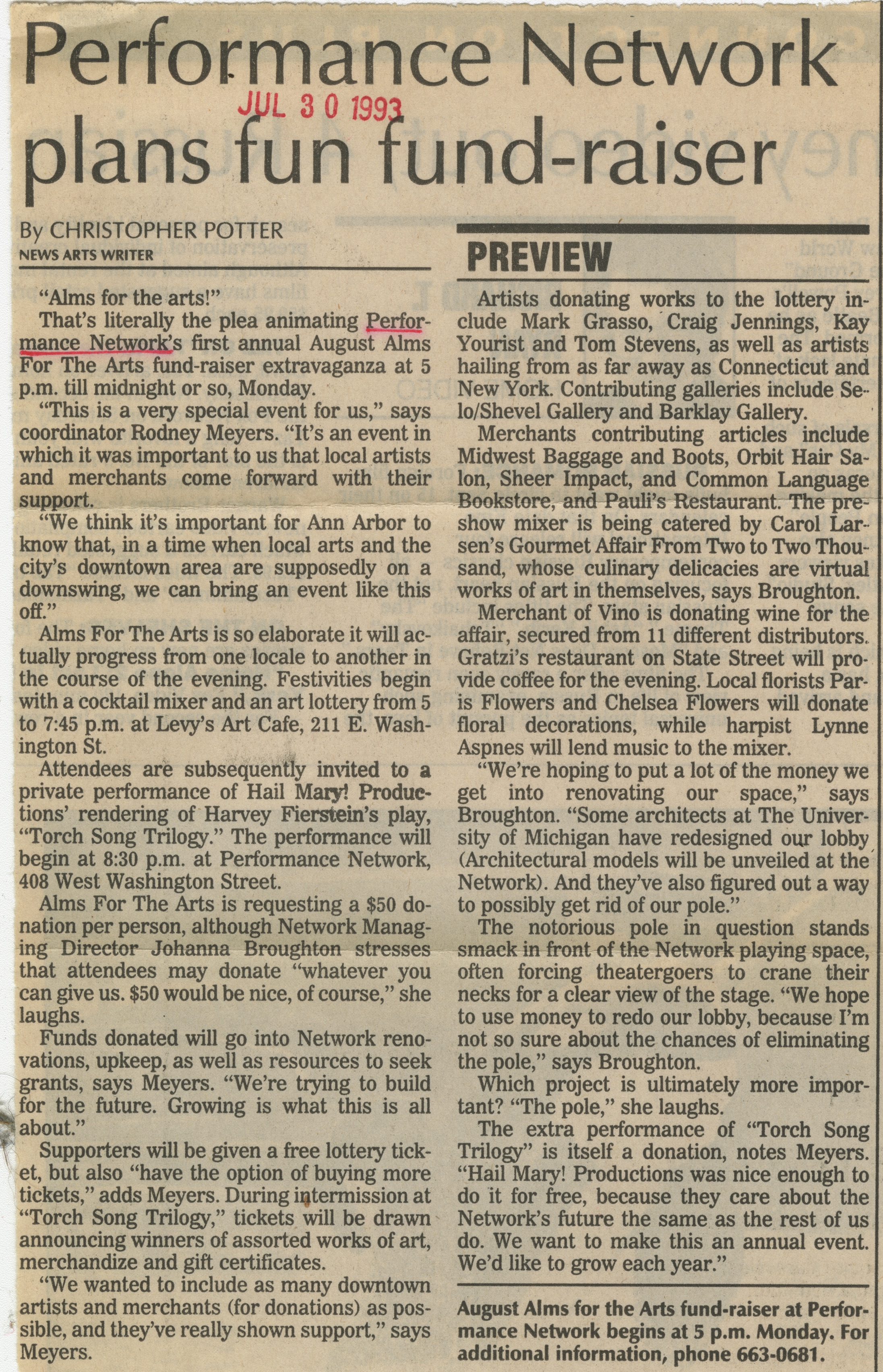 “Alms for the arts!”

That’s literally the plea animating Performance Network’s first annual August Alms For The Arts fund-raiser extravaganza at 5 p.m. till midnight or so, Monday.

“This is a very special event for us,” says coordinator Rodney Meyers. “It’s an event in which it was important to us that local artists and merchants come forward with their support.

“We think it’s important for Ann Arbor to know that, in a time when local arts and the city’s downtown area are supposedly on a downswing, we can bring an event like this off.”

Alms For The Arts is so elaborate it will actually progress from one locale to another in the course of the evening. Festivities begin with a cocktail mixer and an art lottery from 5 to 7:45 p.m. at Levy’s Art Cafe, 211 E. Washington St.

Alms For The Arts is requesting a $50 donation per person, although Network Managing Director Johanna Broughton stresses that attendees may donate “whatever you can give us. $50 would be nice, of course,” she laughs.

Funds donated will go into Network renovations, upkeep, as well as resources to seek grants, says Meyers. “We’re trying to build for the future. Growing is what this is all about.”

Supporters will be given a free lottety ticket, but also “have the option of buying more tickets,” adds Meyers. During intermission at “Torch Song Trilogy,” tickets will be drawn announcing winners of assorted works of art, merchandize and gift certificates.

“We wanted to include as many downtown artists and merchants (for donations) as possible, and they’ve really shown support,” says Meyers.

Artists donating works to the lottery include Mark Grasso, Craig Jennings, Kay Yourist and Tom Stevens, as well as artists hailing from as far away as Connecticut and New York. Contributing galleries include Sello/Shevel Gallery and Barklay Gallery.

Merchants contributing articles include Midwest Baggage and Boots, Orbit Hair Salon, Sheer Impact, and Common Language Bookstore, and Pauli’s Restaurant. The preshow mixer is being catered by Carol Larsen’s Gourmet Affair From Two to Two Thousand, whose culinary delicacies are virtual works of art in themselves, says Broughton.

Merchant of Vino is donating wine for the affair, secured from 11 different distributors. Gratzi’s restaurant on State Street will provide coffee for the evening. Local florists Paris Flowers and Chelsea Flowers will donate floral decorations, while harpist Lynne Aspnes will lend music to the mixer.

“We’re hoping to put a lot of the money we get into renovating our space,” says Broughton. “Some architects at The University of Michigan have redesigned our lobby (Architectural models will be unveiled at the Network). And they’ve also figured out a way to possibly get rid of our pole.”

The notorious pole in question stands smack in front of the Network playing space, often forcing theatergoers to crane their necks for a clear view of the stage. “We hope to use money to redo our lobby, because I’m not so sure about the chances of eliminating the pole,” says Broughton.

Which project is ultimately more important? “The pole,” she laughs.

The extra performance of “Torch Song Trilogy” is itself a donation, notes Meyers. “Hail Mary! Productions was nice enough to do it for free, because they care about the Network’s future the same as the rest of us do. We want to make this an annual event. We’d like to grow each year.”