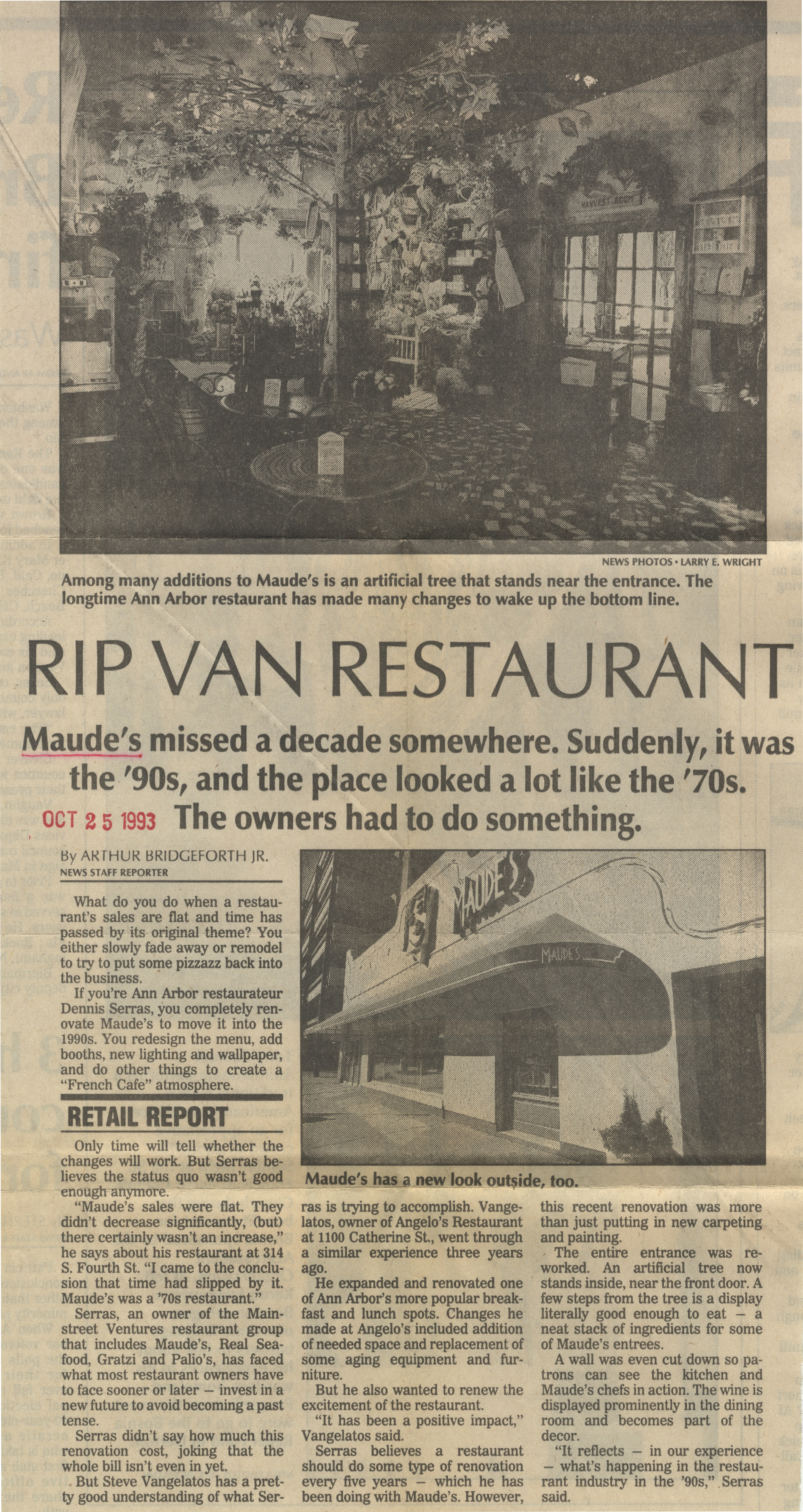 Among many additions to Maude's is an artificial tree that stands near the entrance. The longtime Ann Arbor restaurant has made many changes to wake up the bottom line.

Maude's missed a decade somewhere. Suddenly, it was the '90s, and the place looked a lot like the '70s. The owners had to do something.

What do you do when a restaurant’s sales are flat and time has passed by its original theme? You either slowly fade away or remodel to try to put some pizzazz back into the business.

If you’re Ann Arbor restaurateur Dennis Serras, you completely renovate Maude’s to move it into the 1990s. You redesign the menu, add booths, new lighting and wallpaper, and do other things to create a "French Cafe” atmosphere.

Only time will tell whether the changes will work. But Serras believes the status quo wasn’t good enough anymore.

“Maude’s sales were flat. They didn’t decrease significantly, (but) there certainly wasn’t an increase,” he says about his restaurant at 314 S. Fourth St. “I came to the conclusion that time had slipped by it. Maude’s was a ’70s restaurant.”

Serras, an owner of the Main-street Ventures restaurant group that includes Maude’s, Real Seafood, Gratzi and Palio’s, has faced what most restaurant owners have to face sooner or later - invest in a new future to avoid becoming a past tense.

Serras didn’t say how much this renovation cost, joking that the whole bill isn’t even in yet.

But Steve Vangelatos has a pretty good understanding of what Serras is trying to accomplish. Vangelatos, owner of Angelo’s Restaurant at 1100 Catherine St., went through a similar experience three years ago.

He expanded and renovated one of Ann Arbor’s more popular breakfast and lunch spots. Changes he made at Angelo’s included addition of needed space and replacement of some aging equipment and furniture.

But he also wanted to renew the excitement of the restaurant.

“It has been a positive impact,” Vangelatos said.

Serras believes a restaurant should do some type of renovation every five years - which he has been doing with Maude’s. However, this recent renovation was more than just putting in new carpeting and painting.

The entire entrance was reworked. An artificial tree now stands inside, near the front door. A few steps from the tree is a display literally good enough to eat - a neat stack of ingredients for some of Maude’s entrees.

A wall was even cut down so patrons can see the kitchen and Maude’s chefs in action. The wine is displayed prominently in the dining room and becomes part of the decor.

“It reflects - in our experience - what’s happening in the restaurant industry in the ’90s,” Serras said.