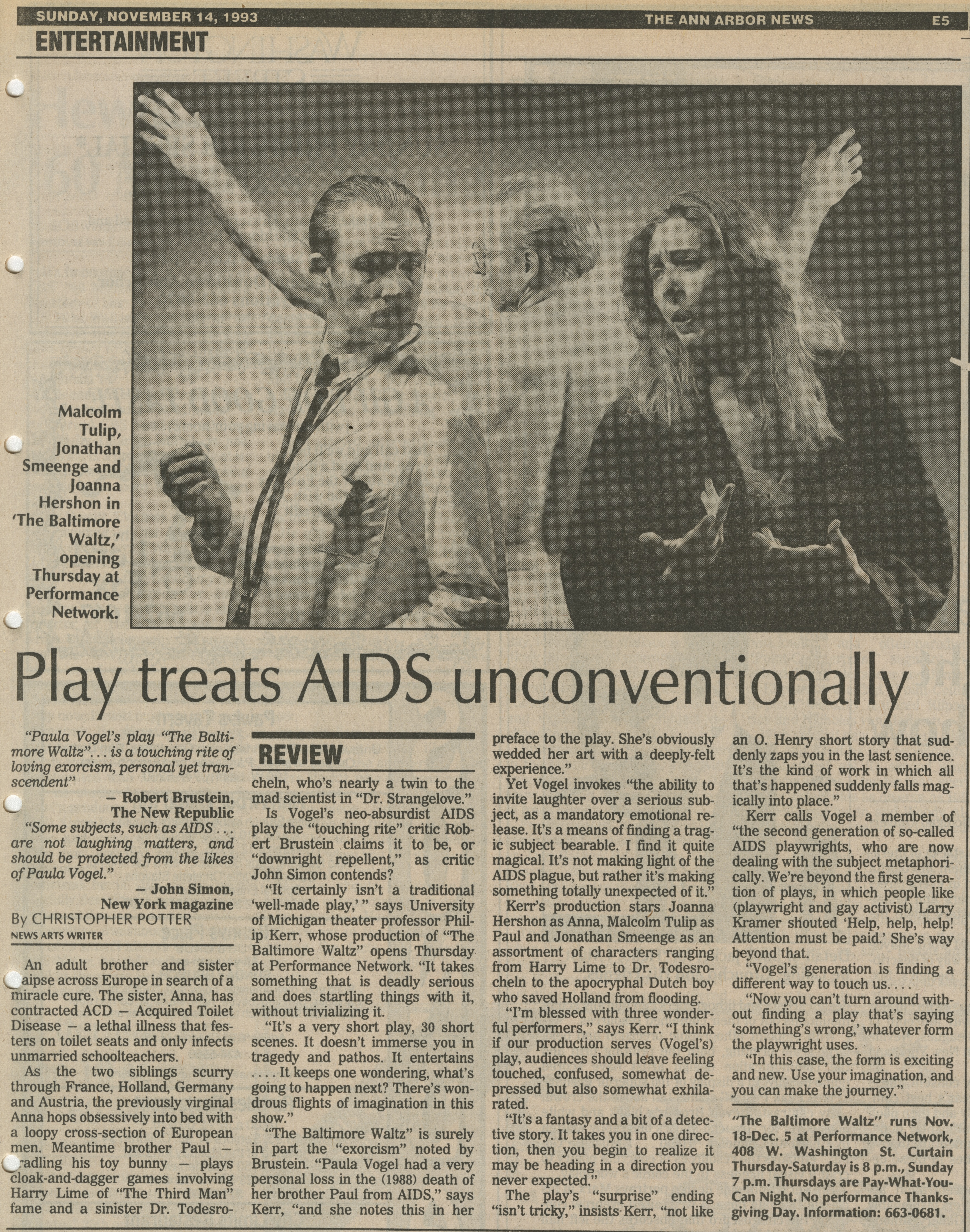 “Some subjects, such as AIDS... are not laughing matters, and should be protected from the likes of Paula Vogel.” - John Simon, New York magazine

An adult brother and sister  traipse across Europe in search of a miracle cure. The sister, Anna, has contracted ACD - Acquired Toilet Disease - a lethal illness that festers on toilet seats and only infects unmarried schoolteachers.

Is Vogel’s neo-absurdist AIDS play the “touching rite” critic Robert Brustein claims it to be, or “downright repellent,” as critic John Simon contends?

“It certainly isn’t a traditional ‘well-made play,’” says University of Michigan theater professor Philip Kerr, whose production of “The Baltimore Waltz” opens Thursday at Performance Network. “It takes something that is deadly serious and does startling things with it, without trivializing it.

“It’s a very short play, 30 short scenes. It doesn’t immerse you in tragedy and pathos. It entertains — It keeps one wondering, what’s going to happen next? There’s wondrous flights of imagination in this show.”

“The Baltimore Waltz” is surely in part the “exorcism” noted by Brustein. “Paula Vogel had a very personal loss in the (1988) death of her brother Paul from AIDS,” says Kerr, “and she notes this in her
preface to the play. She’s obviously wedded her art with a deeply-felt experience.”

Yet Vogel invokes “the ability to invite laughter over a serious subject, as a mandatory emotional release. It’s a means of finding a tragic subject bearable. I find it quite magical. It’s not making light of the AIDS plague, but rather it’s making something totally unexpected of it.”

Kerr’s production stars Joanna Hershon as Anna, Malcolm Tulip as Paul and Jonathan Smeenge as an assortment of characters ranging from Harry Lime to Dr. Todesrocheln to the apocryphal Dutch boy who saved Holland from flooding.

“It’s a fantasy and a bit of a detective story. It takes you in one direction, then you begin to realize it may be heading in a direction you never expected.”

The play’s “surprise” ending “isn’t tricky,” insists-Kerr, “not like
an 0. Henry short story that suddenly zaps you in the last sentence. It’s the kind of work in which all that’s happened suddenly falls magically into place.”

Kerr calls Vogel a member of “the second generation of so-called AIDS playwrights, who are now dealing with the subject metaphorically. We’re beyond the first generation of plays, in which people like (playwright and gay activist) Larry Kramer shouted ‘Help, help, help! Attention must be paid.’ She’s way beyond that.

“Vogel’s generation is finding a different way to touch us....

“Now you can’t turn around without finding a play that’s saying ‘something’s wrong,’ whatever form the playwright uses.

“In this case, the form is exciting and new. Use your imagination, and you can make the journey.”