'Zooman' Theme In Black And White 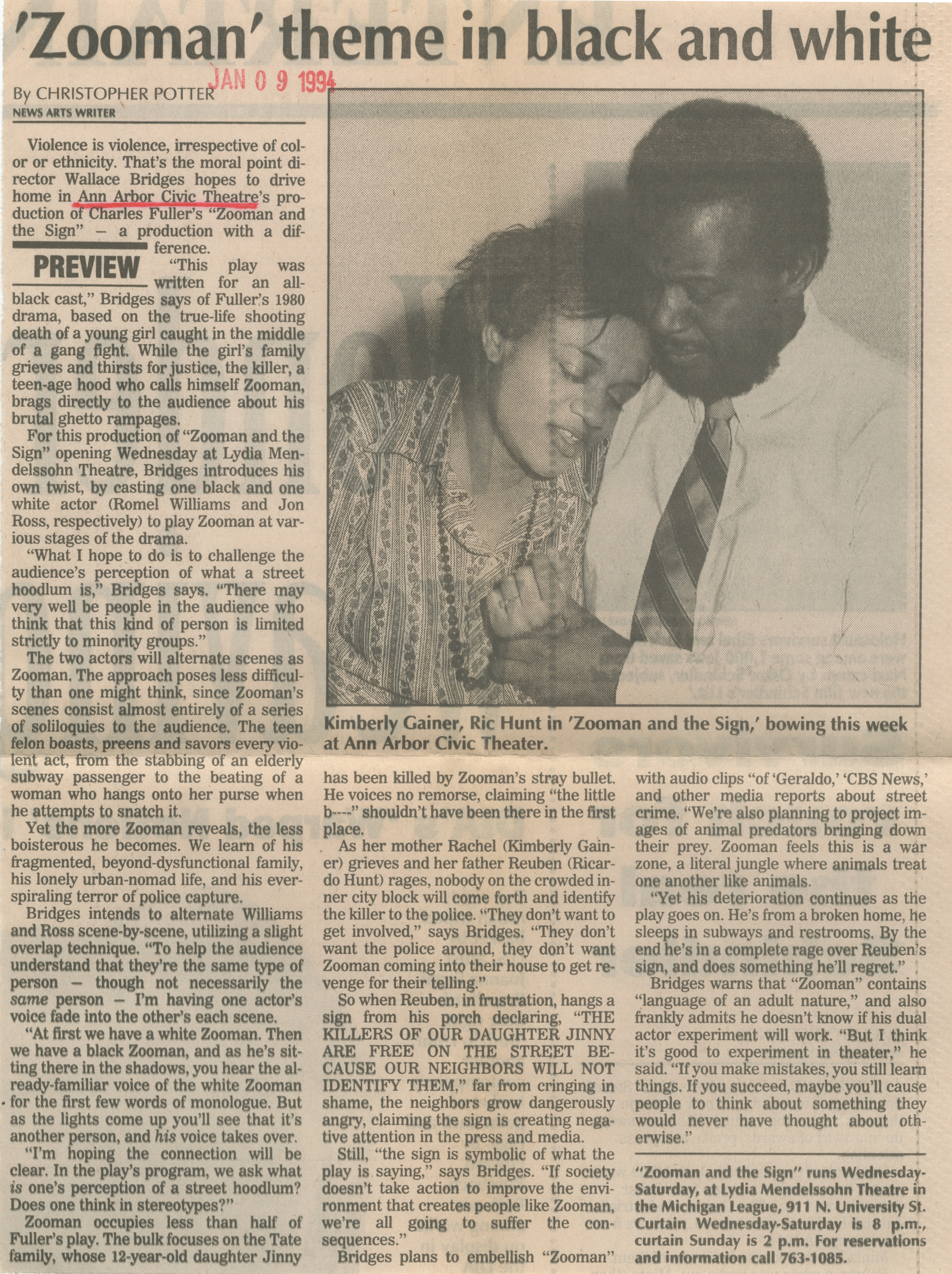 ﻿'Zooman' theme in black and white

Violence is violence, irrespective of color or ethnicity. That’s the moral point director Wallace Bridges hopes to drive home in Ann Arbor Civic Theatre’s production of Charles Fuller’s “Zooman and the Sign” - a production with a difference.

"Thiis play was written for an all-black cast,” Bridges says of Fuller’s 1980 drama, based on the true-life shooting death of a young girl caught in the middle of a gang fight. While the girl’s family grieves and thirsts for justice, the killer, a teen-age hood who calls himself Zooman, brags directly to the audience about his brutal ghetto rampages.

For this production of “Zooman and the Sign" opening Wednesday at Lydia Mendelssohn Theatre, Bridges introduces his own twist, by casting one black and one white actor (Romel Williams and Jon Ross, respectively) to play Zooman at various stages of the drama.

“What I hope to do is to challenge the audience’s perception of what a street hoodlum is,” Bridges says. "There may very well be people in the audience who think that this kind of person is limited strictly to minority groups.”

The two actors will alternate scenes as Zooman. The approach poses less difficulty than one might think, since Zooman’s scenes consist almost entirely of a series of soliloquies to the audience. The teen felon boasts, preens and savors every violent act, from the stabbing of an elderly subway passenger to the beating of a woman who hangs onto her purse when he attempts to snatch it.

Yet the more Zooman reveals, the less boisterous he becomes. We learn of his fragmented, beyond-dysfunctional family, his lonely urban-nomad life, and his ever-spiraling terror of police capture.

Bridges intends to alternate Williams and Ross scene-by-scene, utilizing a slight overlap technique. "To help the audience understand that they’re the same type of person - though not necessarily the same person - I’m having one actor’s voice fade into the other’s each scene.

“At first we have a white Zooman. Then we have a black Zooman, and as he’s sitting there in the shadows, you hear the already-familiar voice of the white Zooman for the first few words of monologue. But as the lights come up you'll see that it’s another person, and his voice takes over.

"I’m hoping the connection will be clear. In the play’s program, we ask what is one’s perception of a street hoodlum? Does one think in stereotypes?”

Zooman occupies less than half of Fuller’s play. The bulk focuses on the Tate family, whose 12-year-old daughter Jinny has been killed by Zooman’s stray bullet. He voices no remorse, claiming "the little b—’’ shouldn’t have been there in the first place.

As her mother Rachel (Kimberly Gainer) grieves and her father Reuben (Ricardo Hunt) rages, nobody on the crowded inner city block will come forth and identify the killer to the police. “They don’t want to get involved,” says Bridges. “They don’t want the police around, they don’t want Zooman coming into their house to get revenge for their telling.”

So when Reuben, in frustration, hangs a sign from his porch declaring, “THE KILLERS OF OUR DAUGHTER JINNY ARE FREE ON THE STREET BECAUSE OUR NEIGHBORS WILL NOT IDENTIFY THEM,” far from cringing in shame, the neighbors grow dangerously angry, claiming the sign is creating negative attention in the press and media.

Still, “the sign is symbolic of what the play is saying,” says Bridges. “If society doesn't take action to improve the environment that creates people like Zooman, we’re all going to suffer the consequences.”

Bridges plans to embellish “Zooman” with audio clips “of ‘Geraldo,’ ‘CBS News,' and other media reports about street crime. “We’re also planning to project images of animal predators bringing down their prey. Zooman feels this is a war zone, a literal jungle where animals treat one another like animals.

“Yet his deterioration continues as the play goes on. He’s from a broken home, he sleeps in subways and restrooms. By the end he’s in a complete rage over Reuben’s sign, and does something he’ll regret.”

Bridges warns that “Zooman” contains “language of an adult nature,” and also frankly admits he doesn’t know if his dual actor experiment will work. “But I think it’s good to experiment in theater," he said. “If you make mistakes, you still learn things. If you succeed, maybe you’ll cause people to think about something they would never have thought about otherwise.”

“Zooman and the Sign" runs Wednesday-Saturday, at Lydia Mendelssohn Theatre in the Michigan League, 911 N. University St. Curtain Wednesday-Saturday is 8 p.m., curtain Sunday is 2 p.m. For reservations and information call 763-1085.