Greenhills Up For Grabs 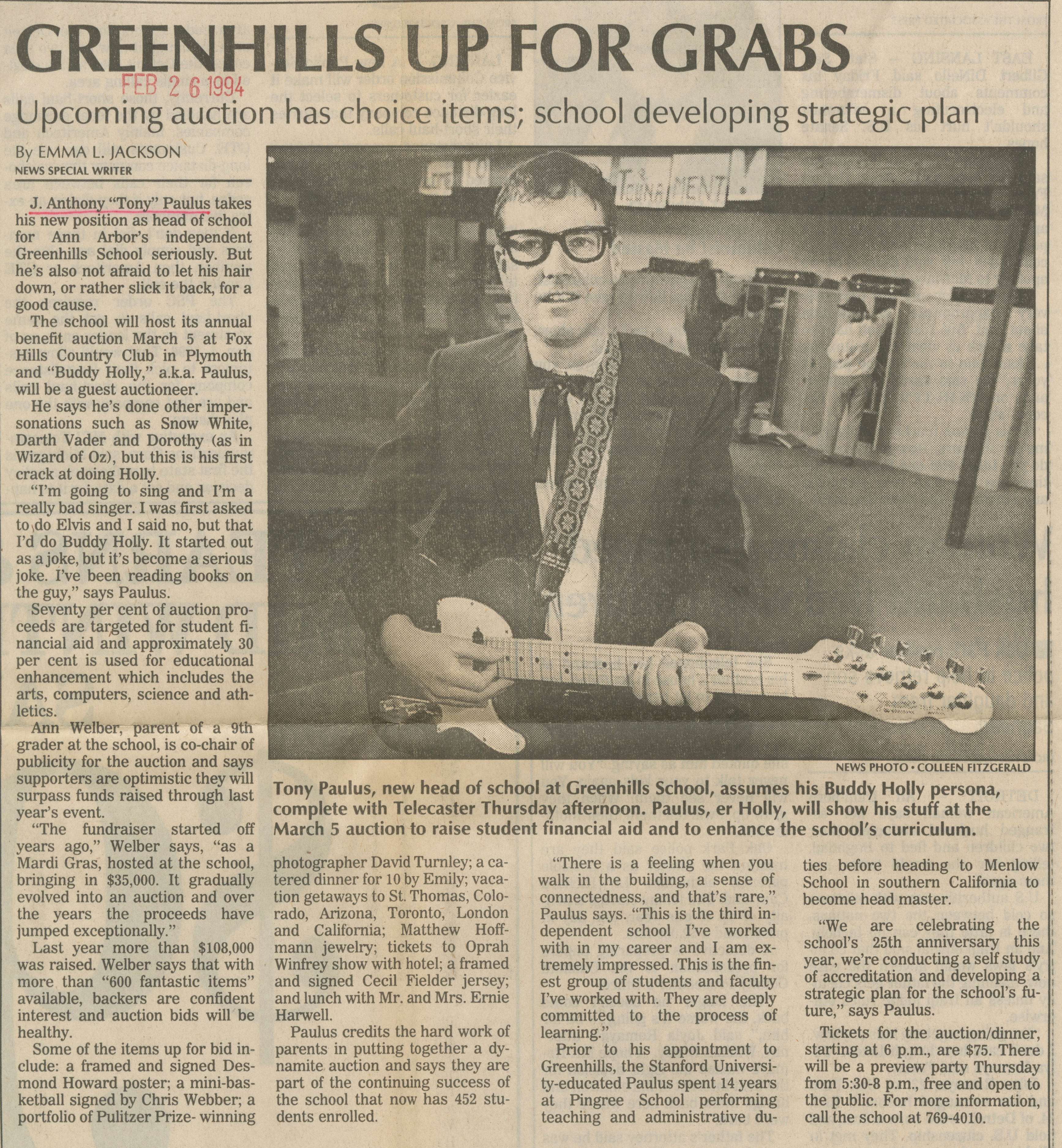 GREENHILLS UP FOR GRABS

J. Anthony “Tony” Paulus takes his new position as head of school for Ann Arbor’s independent Greenhills School seriously. But he’s also not afraid to let his hair down, or rather slick it back, for a good cause.

The school will host its annual benefit auction March 5 at Fox Hills Country Club in Plymouth and “Buddy Holly,” a.k.a. Paulus, will be a guest auctioneer.

He says he’s done other impersonations such as Snow White, Darth Vader and Dorothy (as in Wizard of Oz), but this is his first crack at doing Holly.

“I’m going to sing and I’m a really bad singer. I was first asked to do Elvis and I said no, but that I’d do Buddy Holly. It started out as a joke, but it’s become a serious joke. I’ve been reading books on the guy,” says Paulus.

Seventy per cent of auction proceeds are targeted for student financial aid and approximately 30 per cent is used for educational enhancement which includes the arts, computers, science and athletics.

Ann Welber, parent of a 9th grader at the school, is co-chair of publicity for the auction and says supporters are optimistic they will surpass funds raised through last year’s event.

“The fundraiser started off years ago,” Welber says, “as a Mardi Gras, hosted at the school, bringing in $35,000. It gradually evolved into an auction and over the years the proceeds have jumped exceptionally.”

Last year more than $108,000 was raised. Welber says that with more than “600 fantastic items” available, backers are confident interest and auction bids will be healthy.

Some of the items up for bid include: a framed and signed Desmond Howard poster; a mini-basketball signed by Chris Webber; a portfolio of Pulitzer Prize- winning photographer David Tumley; a catered dinner for 10 by Emily; vacation getaways to St. Thomas, Colorado, Arizona, Toronto, London and California; Matthew Hoffmann jewelry; tickets to Oprah Winfrey show with hotel; a framed and signed Cecil Fielder jersey; and lunch with Mr. and Mrs. Ernie Harwell.

Paulus credits the hard work of parents in putting together a dynamite auction and says they are part of the continuing success of the school that now has 452 students enrolled.

“There is a feeling when you walk in the building, a sense of connectedness, and that’s rare,” Paulus says. “This is the third independent school I’ve worked with in my career and I am extremely impressed. This is the finest group of students and faculty I’ve worked with. They are deeply committed to the process of learning.”

Prior to his appointment to Greenhills, the Stanford University-educated Paulus spent 14 years at Pingree School performing teaching and administrative duties before heading to Menlow School in southern California to become head master.

“We are celebrating the school’s 25th anniversary this year, we’re conducting a self study of accreditation and developing a strategic plan for the school’s future,” says Paulus.