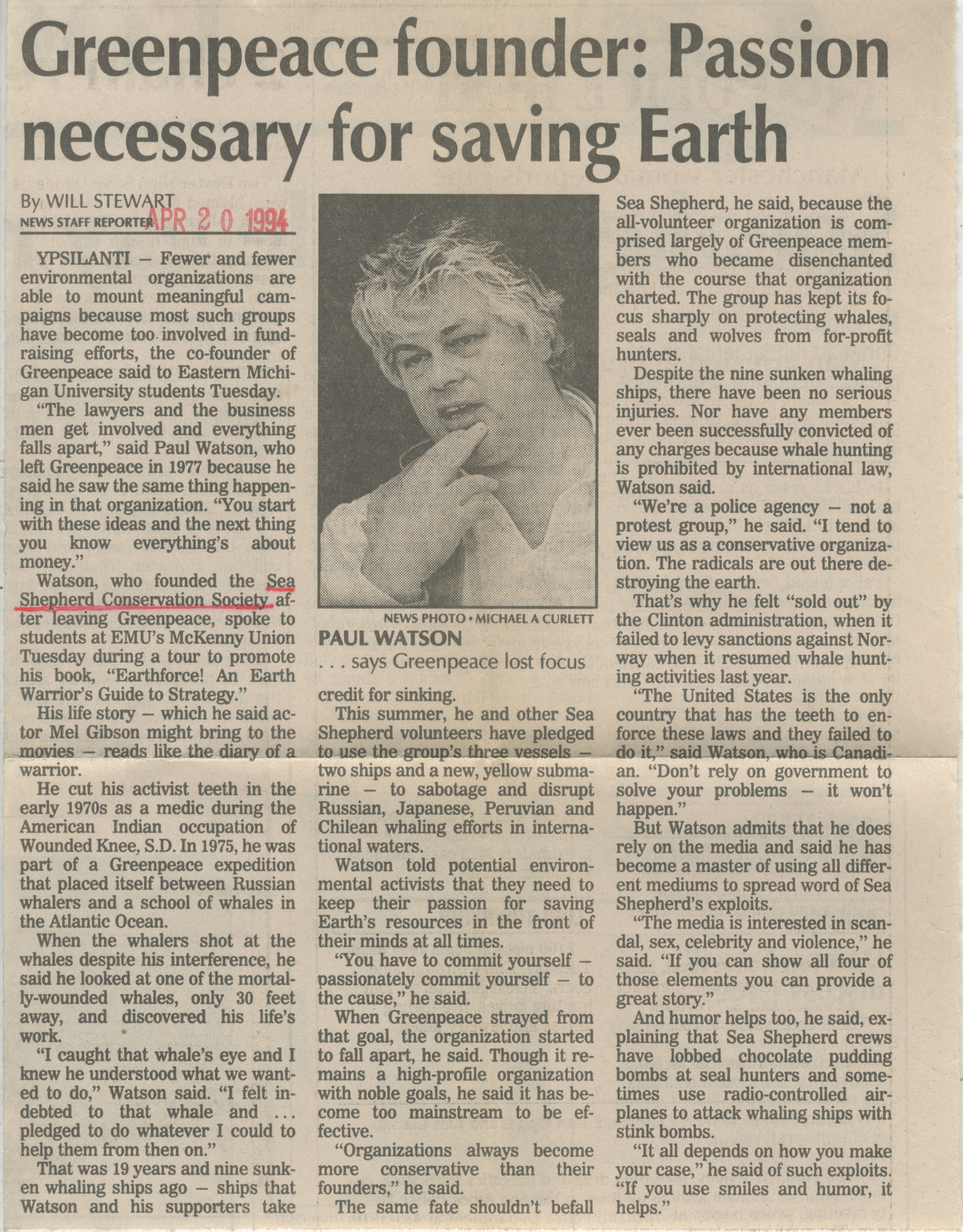 YPSILANTI — Fewer and fewer environmental organizations are able to mount meaningful campaigns because most such groups have become too involved in fundraising efforts, the co-founder of Greenpeace said to Eastern Michigan University students Tuesday.

“The lawyers and the business men get involved and everything falls apart,” said Paul Watson, who left Greenpeace in 1977 because he said he saw the same thing happening in that organization. “You start with these ideas and the next thing you know everything’s about money.”

Watson, who founded the Sea Shepherd Conservation Society after leaving Greenpeace, spoke to students at EMU’s McKenny Union Tuesday during a tour to promote his book, “Earthforce! An Earth Warrior’s Guide to Strategy.”

His life story — which he said actor Mel Gibson might bring to the movies - reads like the diary of a warrior.

He cut his activist teeth in the early 1970s as a medic during the American Indian occupation of Wounded Knee, S.D. In 1975, he was part of a Greenpeace expedition that placed itself between Russian whalers and a school of whales in the Atlantic Ocean.

When the whalers shot at the whales despite his interference, he said he looked at one of the mortally-wounded whales, only 30 feet away, and discovered his life’s work.

“I caught that whale’s eye and I knew he understood what we wanted to do,” Watson said. “I felt indebted to that whale and ... pledged to do whatever I could to help them from then on.”

That was 19 years and nine sunken whaling ships ago - ships that Watson and his supporters take credit for sinking.

This summer, he and other Sea Shepherd volunteers have pledged to use the group’s three vessels -two ships and a new, yellow submarine — to sabotage and disrupt Russian, Japanese, Peruvian and Chilean whaling efforts in international waters.

Watson told potential environmental activists that they need to keep their passion for saving Earth’s resources in the front of their minds at all times.

When Greenpeace strayed from that goal, the organization started to fall apart, he said. Though it remains a high-profile organization with noble goals, he said it has become too mainstream to be effective.

“Organizations always become more conservative than their founders,” he said.

The same fate shouldn’t befallbSea Shepherd, he said, because the all-volunteer organization is comprised largely of Greenpeace members who became disenchanted with the course that organization charted. The group has kept its focus sharply on protecting whales, seals and wolves from for-profit hunters.

Despite the nine sunken whaling ships, there have been no serious injuries. Nor have any members ever been successfully convicted of any charges because whale hunting is prohibited by international law, Watson said.

“We’re a police agency - not a protest group,” he said. “I tend to view us as a conservative organization. The radicals are out there destroying the earth.

That’s why he felt “sold out” by the Clinton administration, when it failed to levy sanctions against Norway when it resumed whale hunting activities last year.

“The United States is the only country that has the teeth to enforce these laws and they failed to do it” said Watson, who is Canadian. “Don’t rely on government to solve your problems - it won’t happen.”

But Watson admits that he does rely on the media and said he has become a master of using all different mediums to spread word of Sea Shepherd’s exploits.

“The media is interested in scandal, sex, celebrity and violence,” he said. “If you can show all four of those elements you can provide a great story.”

And humor helps too, he said, explaining that Sea Shepherd crews have lobbed chocolate pudding bombs at seal hunters and sometimes use radio-controlled airplanes to attack whaling ships with stink bombs.

“It all depends on how you make your case,” he said of such exploits. “If you use smiles and humor, it helps.”