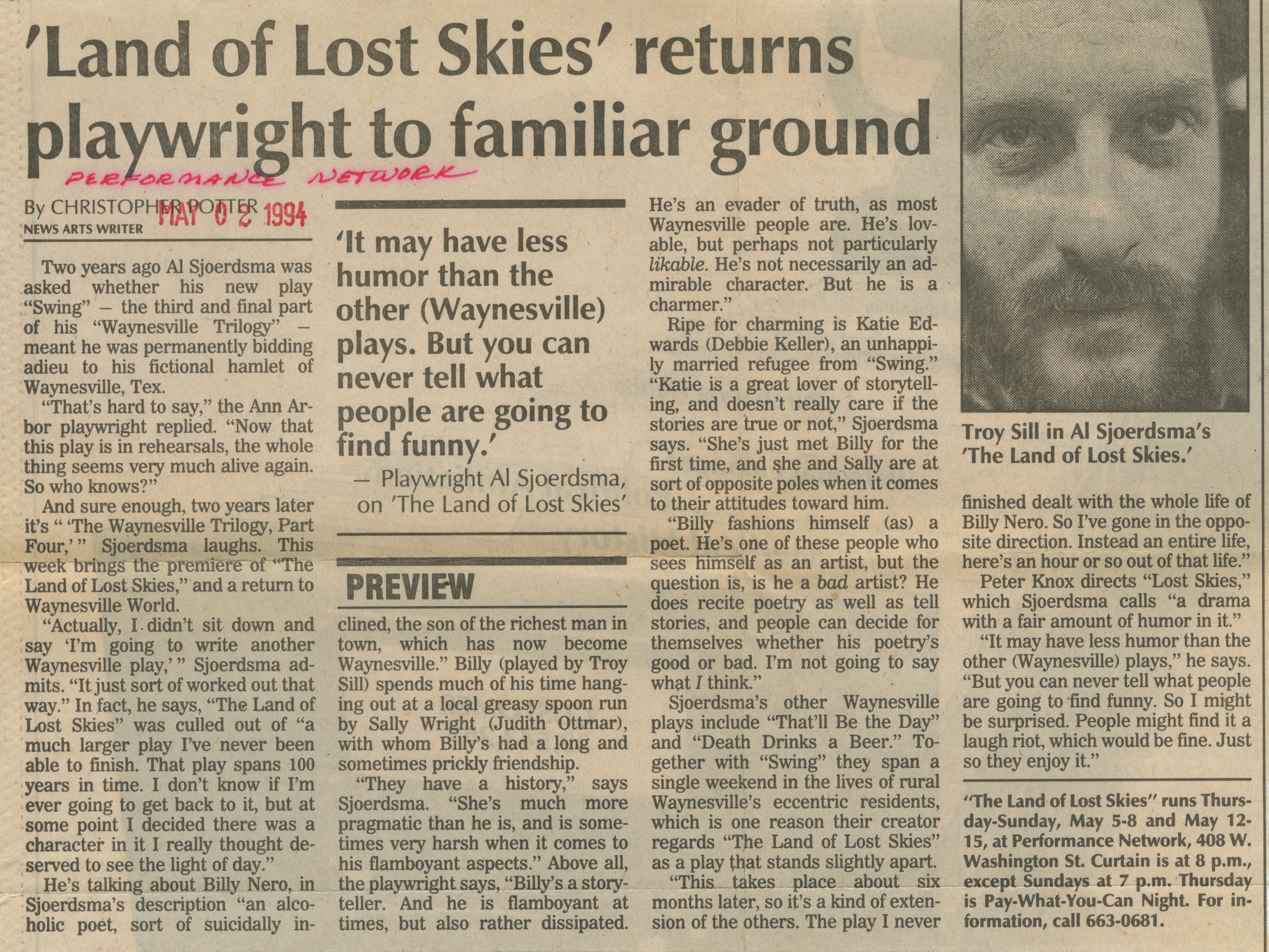 'It may have less humor than the other (Waynesville) plays. But you can never tell what people are going to find funny.'

— Playwright Al Sjoerdsma, on 'The Land of Lost Skies'

Two years ago Al Sjoerdsma was asked whether his new play “Swing” - the third and final part of his “Waynesville Trilogy” -meant he was permanently bidding adieu to his fictional hamlet of Waynesville, Tex.

“That’s hard to say,” the Ann Arbor playwright replied. “Now that this play is in rehearsals, the whole thing seems very much alive again. So who knows?”

And sure enough, two years later it’s “ ‘The Waynesville Trilogy, Part Four,’” Sjoerdsma laughs. This week brings the premiere of "The Land of Lost Skies,” and a return to Waynesville World.

“Actually, I didn’t sit down and say ‘I’m going to write another Waynesville play,’ ” Sjoerdsma admits. “It just sort of worked out that way.” In fact, he says, “The Land of Lost Skies” was culled out of “a much larger play I’ve never been able to finish. That play spans 100 years in time. I don’t know if I’m ever going to get back to it, but at some point I decided there was a character in it I really thought deserved to see the light of day.”

He’s talking about Billy Nero, in Sjoerdsma’s description “an alcoholic poet, sort of suicidally inclined, the son of the richest man in town, which has now become Waynesville.” Billy (played by Troy Sill) spends much of his time hanging out at a local greasy spoon run by Sally Wright (Judith Ottmar), with whom Billy’s had a long and sometimes prickly friendship.

“They have a history,” says Sjoerdsma. “She’s much more pragmatic than he is, and is sometimes very harsh when it comes to his flamboyant aspects.” Above all, the playwright says, “Billy’s a storyteller. And he is flamboyant at times, but also rather dissipated. He’s an evader of truth, as most Waynesville people are. He’s lovable, but perhaps not particularly likable. He’s not necessarily an admirable character. But he is a charmer.”

Ripe for charming is Katie Edwards (Debbie Keller), an unhappily married refugee from “Swing.” “Katie is a great lover of storytelling, and doesn’t really care if the stories are true or not,” Sjoerdsma says. “She’s just met Billy for the first time, and she and Sally are at sort of opposite poles when it comes to their attitudes toward him.

“Billy fashions himself (as) a poet. He’s one of these people who sees himself as an artist, but the question is, is he a bad artist? He does recite poetry as well as tell stories, and people can decide for themselves whether his poetry’s good or bad. I’m not going to say what I think.”

Sjoerdsma’s other Waynesville plays include “That’ll Be the Day” and “Death Drinks a Beer.” Together with “Swing” they span a single weekend in the lives of rural Waynesville’s eccentric residents, which is one reason their creator regards “The Land of Lost Skies” as a play that stands slightly apart.

Troy Sill in Al Sjoerdsma's 'The Land of Lost Skies.'

“This takes place about six months later, so it’s a kind of extension of the others. The play I never finished dealt with the whole life of Billy Nero. So I’ve gone in the opposite direction. Instead an entire life, here’s an hour or so out of that life.” Peter Knox directs “Lost Skies,” which Sjoerdsma calls “a drama with a fair amount of humor in it.” “It may have less humor than the other (Waynesville) plays,” he says. “But you can never tell what people are going to find funny. So I might be surprised. People might find it a laugh riot, which would be fine. Just so they enjoy it.”