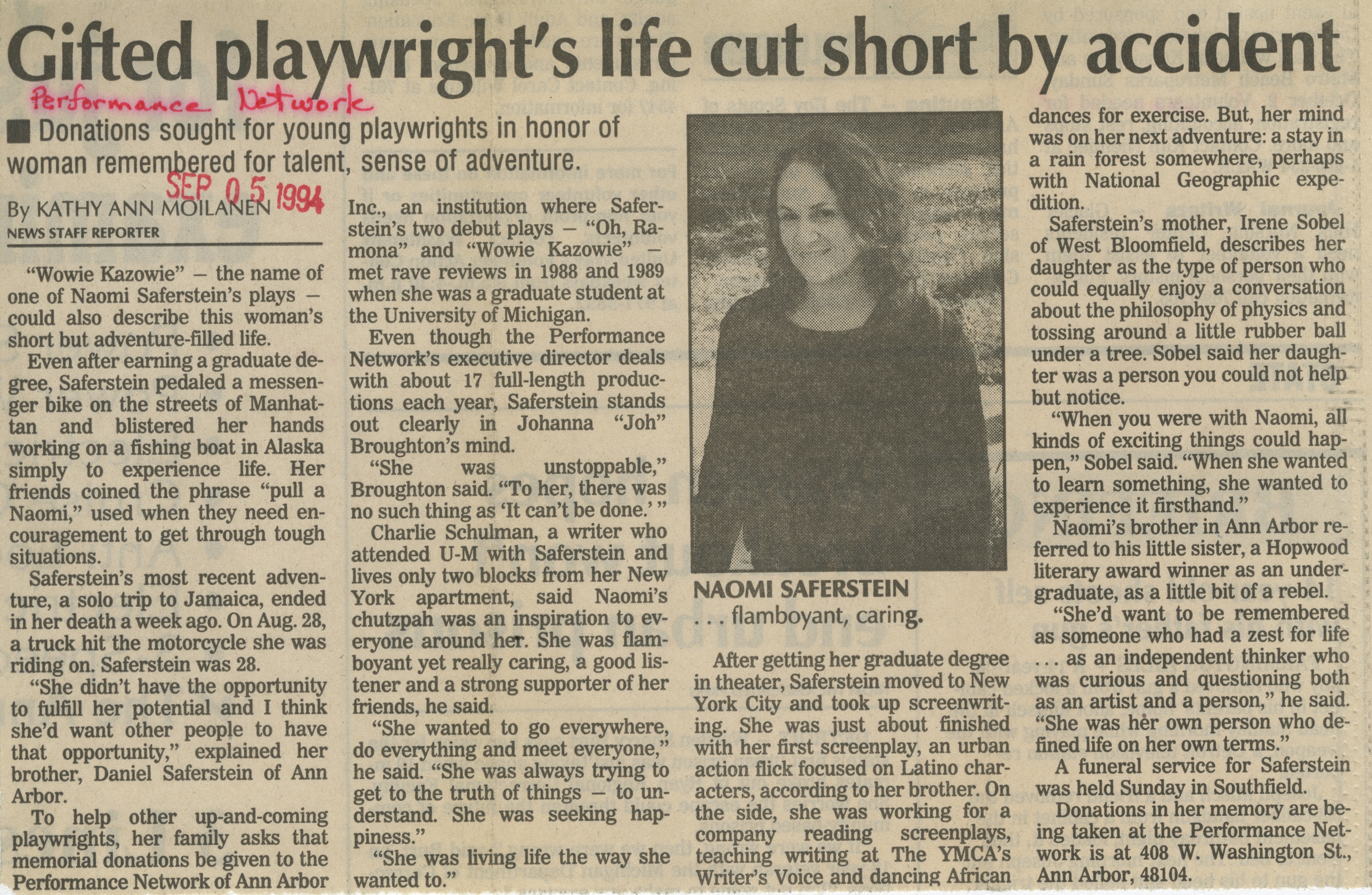 ■ Donations sought for young playwrights in honor of woman rementoered for talent, sense of adventure.

“Wowie Kazowie” - the name of one of Naomi Saferstein’s plays - could also describe this woman’s short but adventure-filled life.

Even after earning a graduate degree, Saferstein pedaled a messenger bike on the streets of Manhattan and blistered her hands working on a fishing boat in Alaska simply to experience life. Her friends coined the phrase “pull a Naomi,” used when they need encouragement to get through tough situations.

Saferstein’s most recent adventure, a solo trip to Jamaica, ended in her death a week ago. On Aug. 28, a truck hit the motorcycle she was riding on. Saferstein was 28.

“She didn’t have the opportunity to fulfill her potential and I think she’d want other people to have that opportunity,” explained her brother, Daniel Saferstein of Ann Arbor.

To help other up-and-coming playwrights, her family asks that memorial donations be given to the Performance Network of Ann Arbor Inc., an institution where Saferstein’s two debut plays - “Oh, Ramona” and “Wowie Kazowie” met rave reviews in 1988 and 1989 when she was a graduate student at the University of Michigan.

Even though the Performance Network’s executive director deals with about 17 full-length productions each year, Saferstein stands out clearly in Johanna “Joh” Broughton’s mind.

“She was unstoppable,” Broughton said. “To her, there was no such thing as ‘It can’t be done.’ ”

Charlie Schulman, a writer who attended U-M with Saferstein and lives only two blocks from her New York apartment, said Naomi’s chutzpah was an inspiration to everyone around her. She was flamboyant yet really caring, a good listener and a strong supporter of her friends, he said.

“She wanted to go everywhere, do everything and meet everyone,” he said. “She was always trying to get to the truth of things - to understand. She was seeking happiness."

“She was living life the way she wanted to.”

After getting her graduate degree in theater, Saferstein moved to New York City and took up screenwriting. She was just about finished with her first screenplay, an urban action flick focused on Latino characters, according to her brother. On the side, she was working for a company reading screenplays, teaching writing at The YMCA’s Writer’s Voice and dancing African dances for exercise. But, her mind was on her next adventure: a stay in a rain forest somewhere, perhaps with National Geographic expedition.

Saferstein’s mother, Irene Sobel of West Bloomfield, describes her daughter as the type of person who could equally enjoy a conversation about the philosophy of physics and tossing around a little rubber ball under a tree. Sobel said her daughter was a person you could not help but notice.

“When you were with Naomi, all kinds of exciting things could happen,” Sobel said. “When she wanted to learn something, she wanted to experience it firsthand.”

Naomi’s brother in Ann Arbor referred to his little sister, a Hopwood literary award winner as an undergraduate, as a little bit of a rebel.

“She’d want to be remembered as someone who had a zest for life ... as an independent thinker who was curious and questioning both as an artist and a person,” he said. “She was her own person who defined life on her own terms.”

A funeral service for Saferstein was held Sunday in Southfield.

Donations in her memory are being taken at the Performance Network is at 408 W. Washington St., Ann Arbor, 48104.