Sounding Board For Women 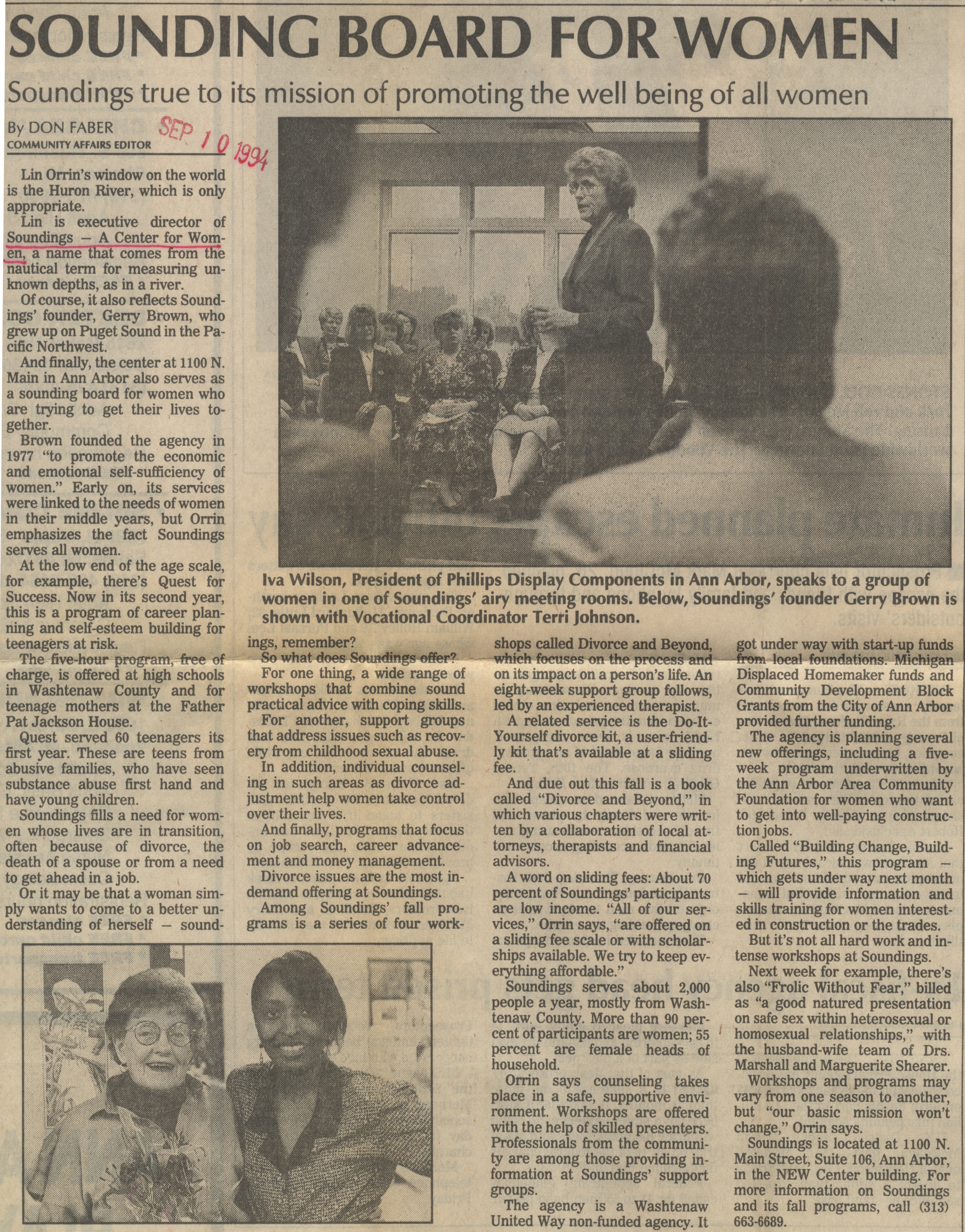 ﻿SOUNDING BOARD FOR WOMEN

Lin Orrin’s window on the world is the Huron River, which is only appropriate.

Lin is executive director of Soundings - A Center for Women, a name that comes from the nautical term for measuring unknown depths, as in a river.

Of course, it also reflects Soundings’ founder, Gerry Brown, who grew up on Puget Sound in the Pacific Northwest.

And finally, the center at 1100 N. Main in Ann Arbor also serves as a sounding board for women who are trying to get their lives together.

Brown founded the agency in 1977 “to promote the economic and emotional self-sufficiency of women.” Early on, its services were linked to the needs of women in their middle years, but Orrin emphasizes the fact Soundings serves all women.

At the low end of the age scale, for example, there’s Quest for Success. Now in its second year, this is a program of career planning and self-esteem building for teenagers at risk.

The five-hour program, free of charge, is offered at high schools in Washtenaw County and for teenage mothers at the Father Pat Jackson House.

Quest served 60 teenagers its first year. These are teens from abusive families, who have seen substance abuse first hand and have young children.

Soundings fills a need for women whose lives are in transition, often because of divorce, the death of a spouse or from a need to get ahead in a job.

Or it may be that a woman simply wants to come to a better understanding of herself - soundings, remember?

So what does Soundings offer?

For one thing, a wide range of workshops that combine sound practical advice with coping skills.

For another, support groups that address issues such as recovery from childhood sexual abuse.

In addition, individual counseling in such areas as divorce adjustment help women take control over their lives.

And finally, programs that focus on job search, career advancement and money management.

Divorce issues are the most in-demand offering at Soundings.

Among Soundings’ fall programs is a series of four workshops called Divorce and Beyond, which focuses on the process and on its impact on a person’s life. An eight-week support group follows, led by an experienced therapist.

A related service is the Do-It-Yourself divorce kit, a user-friendly kit that’s available at a sliding fee.

And due out this fall is a book called “Divorce and Beyond,” in which various chapters were written by a collaboration of local attorneys, therapists and financial advisors.

A word on sliding fees: About 70 percent of Soundings’ participants are low income. “All of our services,” Orrin says, “are offered on a sliding fee scale or with scholarships available. We try to keep everything affordable.”

Soundings serves about 2,000 people a year, mostly from Washtenaw County. More than 90 percent of participants are women; 55 percent are female heads of household.

Orrin says counseling takes place in a safe, supportive environment. Workshops are offered with the help of skilled presenters. Professionals from the community are among those providing information at Soundings’ support groups.

The agency is a Washtenaw United Way non-funded agency. It got under way with start-up funds from local foundations. Michigan Displaced Homemaker funds and Community Development Block Grants from the City of Ann Arbor provided further funding.

The agency is planning several new offerings, including a five-week program underwritten by the Ann Arbor Area Community Foundation for women who want to get into well-paying construction jobs.

Called “Building Change, Building Futures,” this program - which gets under way next month - will provide information and skills training for women interested in construction or the trades.

But it’s not all hard work and intense workshops at Soundings.

Next week for example, there’s also “Frolic Without Fear,” billed as “a good natured presentation on safe sex within heterosexual or homosexual relationships,” with the husband-wife team of Drs. Marshall and Marguerite Shearer.

Workshops and programs may vary from one season to another, but “our basic mission won’t change,” Orrin says.

Iva Wilson, President of Phillips Display Components in Ann Arbor, speaks to a group of women in one of Soundings' airy meeting rooms. Below, Soundings' founder Gerry Brown is shown with Vocational Coordinator Terri Johnson.