Hanging Out At The Del 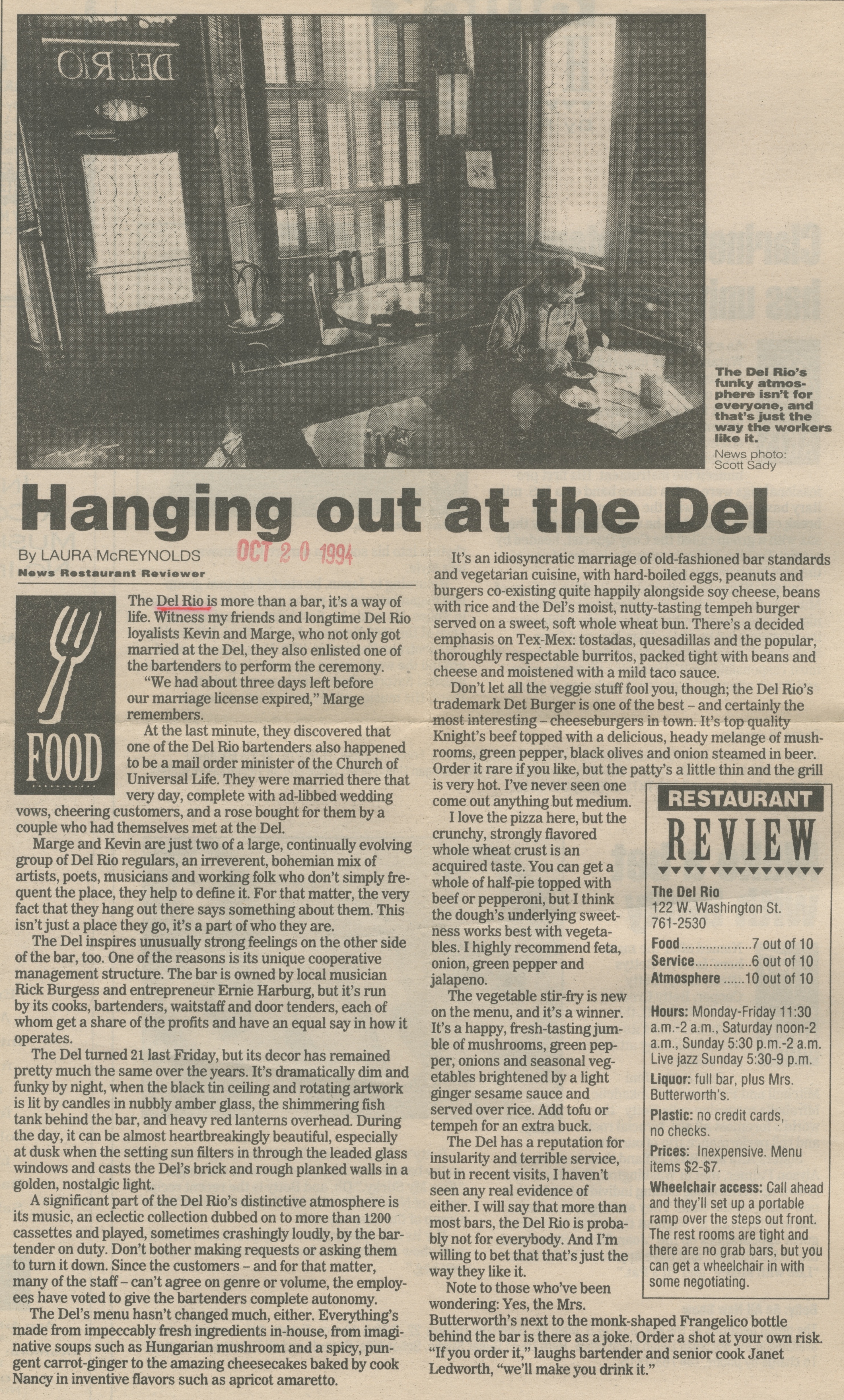 Hanging out at the Del

The Del Rio is more than a bar, it’s a way of life. Witness my friends and longtime Del Rio loyalists Kevin and Marge, who not only got married at the Del, they also enlisted one of the bartenders to perform the ceremony.

“We had about three days left before our marriage license expired,” Marge remembers.

At the last minute, they discovered that one of the Del Rio bartenders also happened to be a mail order minister of the Church of Universal Life. They were married there that very day, complete with ad-libbed wedding vows, cheering customers, and a rose bought for them by a couple who had themselves met at the Del.

Marge and Kevin are just two of a large, continually evolving group of Del Rio regulars, an irreverent, bohemian mix of artists, poets, musicians and working folk who don’t simply frequent the place, they help to define it. For that matter, the very fact that they hang out there says something about them. This isn’t just a place they go, it’s a part of who they are.

The Del inspires unusually strong feelings on the other side of the bar, too. One of the reasons is its unique cooperative management structure. The bar is owned by local musician Rick Burgess and entrepreneur Ernie Harburg, but it’s run by its cooks, bartenders, waitstaff and door tenders, each of whom get a share of the profits and have an equal say in how it operates.

The Del turned 21 last Friday, but its decor has remained pretty much the same over the years. It’s dramatically dim and funky by night, when the black tin ceiling and rotating artwork is lit by candles in nubbly amber glass, the shimmering fish tank behind the bar, and heavy red lanterns overhead. During the day, it can be almost heartbreakingly beautiful, especially at dusk when the setting sun filters in through the leaded glass windows and casts the Del’s brick and rough planked walls in a golden, nostalgic light.

A significant part of the Del Rio’s distinctive atmosphere is its music, an eclectic collection dubbed on to more than 1200 cassettes and played, sometimes crashingly loudly, by the bartender on duty. Don’t bother making requests or asking them to turn it down. Since the customers - and for that matter, many of the staff - can’t agree on genre or volume, the employees have voted to give the bartenders complete autonomy.

The Del’s menu hasn’t changed much, either. Everything’s made from impeccably fresh ingredients in-house, from imaginative soups such as Hungarian mushroom and a spicy, pungent carrot-ginger to the amazing cheesecakes baked by cook Nancy in inventive flavors such as apricot amaretto.

It’s an idiosyncratic marriage of old-fashioned bar standards and vegetarian cuisine, with hard-boiled eggs, peanuts and burgers co-existing quite happily alongside soy cheese, beans with rice and the Del’s moist, nutty-tasting tempeh burger served on a sweet, soft whole wheat bun. There’s a decided emphasis on Tex-Mex: tostadas, quesadillas and the popular, thoroughly respectable burritos, packed tight with beans and cheese and moistened with a mild taco sauce.

Don’t let all the veggie stuff fool you, though; the Del Rio’s trademark Det Burger is one of the best - and certainly the most interesting - cheeseburgers in town. It’s top quality Knight’s beef topped with a delicious, heady melange of mushrooms, green pepper, black olives and onion steamed in beer. Order it rare if you like, but the patty’s a little thin and the grill is very hot. I’ve never seen one come out anything but medium.

I love the pizza here, but the crunchy, strongly flavored whole wheat crust is an acquired taste. You can get a whole of half-pie topped with beef or pepperoni, but I think the dough’s underlying sweetness works best with vegetables. I highly recommend feta, onion, green pepper and jalapeno.

The vegetable stir-fry is new on the menu, and it’s a winner. It’s a happy, fresh-tasting jumble of mushrooms, green pepper, onions and seasonal vegetables brightened by a light ginger sesame sauce and served over rice. Add tofu or tempeh for an extra buck.

The Del has a reputation for insularity and terrible service, but in recent visits, I haven’t seen any real evidence of either. I will say that more than most bars, the Del Rio is probably not for everybody. And I’m willing to bet that that’s just the way they like it.

Note to those who’ve been wondering: Yes, the Mrs.Butterworth’s next to the monk-shaped Frangelico bottle behind the bar is there as a joke. Order a shot at your own risk. “If you order it,” laughs bartender and senior cook Janet Ledworth, “we’ll make you drink it.”

Plastic: no credit cards, no checks.

Wheelchair access: Call ahead and they'll set up a portable ramp over the steps out front. The rest rooms are tight and there are no grab bars, but you can get a wheelchair in with some negotiating.

News Photo: The Del Rio's funky atmosphere isn't for everyone and that's just the way the workers like it. News photo by Scott Sady