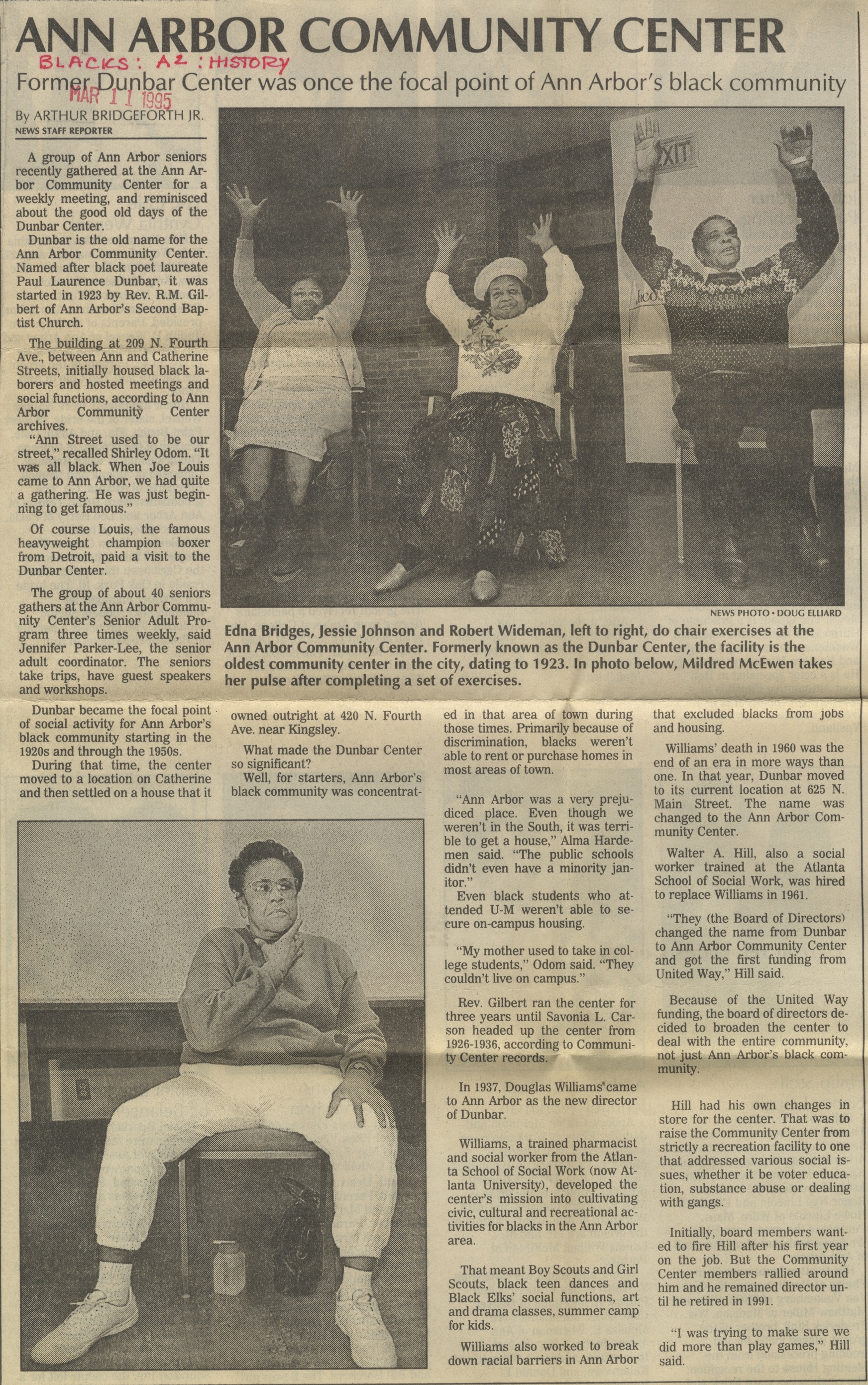 A group of Ann Arbor seniors recently gathered at the Ann Arbor Community Center for a weekly meeting, and reminisced about the good old days of the Dunbar Center.

Dunbar is the old name for the Ann Arbor Community Center. Named after black poet laureate Paul Laurence Dunbar, it was started in 1923 by Rev. R.M. Gilbert of Ann Arbor's Second Baptist Church.

"Ann Street used to be our street," recalled Shirley Odom. "It was all black. When Joe Louis came to Ann Arbor, we had quite a gathering. He was just beginning to get famous."

Of course Louis, famous heavyweight champion boxer from Detroit, paid a visit to the Dunbar Center.

Dunbar became the focal pint of social activity for Ann Arbor's black community starting in the 1920s and through the 1950s.

During that time, the center moved to a location on Catherine and then settled on a house that it owned outright at 420 N. Fourth Ave. near Kingsley.

What made the Dunbar Center so significant?

Well, for starters, Ann Arbor's black community was concentrated in that area of town during those times. Primarily because of discrimination, blacks weren't able to rent or purchase homes in most areas of town.

"Ann Arbor was a very prejudiced place. Even though we weren't in the South, it was terrible to get a house," Alma Hardemen said. "The public schools didn't even have a minority janitor."

"My mother used to take in college students," Odom said. "They couldn't live on campus."

Rev. Gilbert ran the center for three years until Savonia L. Carson headed up the center from 1926-1936, according to Community Center records.

In 1937, Douglas Williams came to Ann Arbor as the new director of Dunbar.

Williams also worked to break down racial barriers in Ann Arbor that excluded blacks from jobs and housing.

Williams' death in 1960 was the end of an era in more ways than one. In that year, Dunbar moved to its current location at 625 N. Main Street. The name was changed to the Ann Arbor Community Center.

Walter A Hill, also a social worker trained at the Atlanta School of Social Work, was hired to replace Williams in 1961.

"They ( the Board of Directors) changed the name from Dunbar to Ann Arbor Community Center and got the first funding from United Way." Hill said.

Because of the United Way funding, the board of directors decided to broaden the center to deal with the entire community, not just Ann Arbor's black community.

Hill had his own changes in store for the center. That was to raise the Community Center from that addressed various social issues, whether it be voter education, substance abuse or dealing with gangs.

Initially, board members wanted to fire Hill after his first year on the job. But the Community Center members rallied around him and he remained director until he retired in 1991.

"I was trying to make sure we did more than play games," Hill said.

Picture: Edna Bridges, Jessie Jackson and Robert Wideman, left to right, do chair exercises at the Ann Arbor Community Center. Formerly known as the Dunbar Center, the facility is the oldest community center in the city, dating to 1923. In photo below, Mildred McEwen takes her pulse after completing a set of exercises.