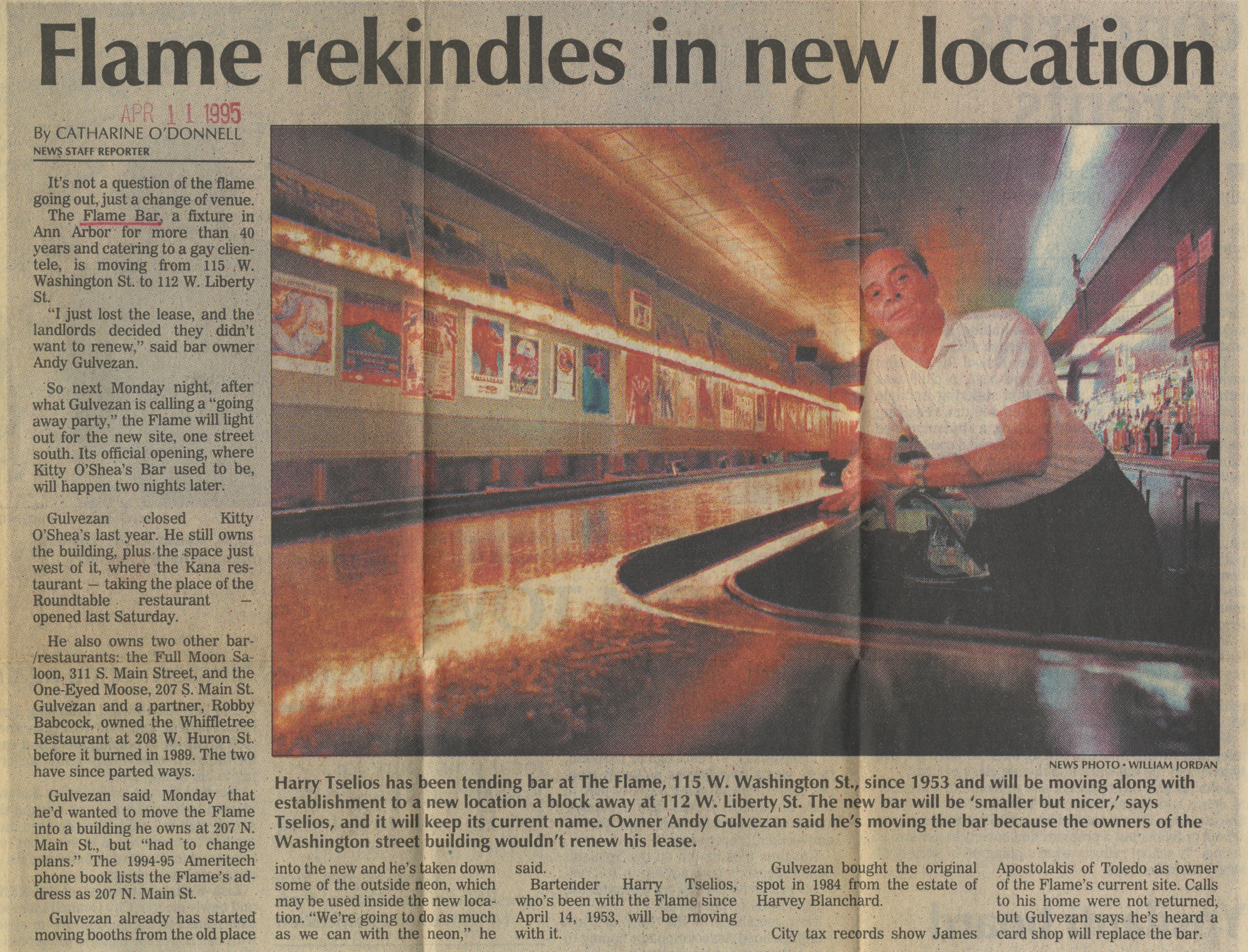 It’s not a question of the flame going out, just a change of venue.

The Flame Bar, a fixture in Ann Arbor for more than 40 years and catering to a gay clientele, is moving from 115 W. Washington St. to 112 W. Liberty St.

“I just lost the lease, and the landlords decided they didn’t want to renew,” said bar owner Andy Gulvezan.

So next Monday night, after what Gulvezan is calling a “going away party,” the Flame will light out for the new site, one street south. Its official opening, where Kitty O’Shea’s Bar used to be, will happen two nights later.

Gulvezan closed Kitty O’Shea's last year. He still owns the building, plus the space just west of it, where the Kana restaurant - taking the place of the Roundtable restaurant - opened last Saturday.

He also owns two other bar-/restaurants: the Full Moon Saloon, 311 S. Main Street, and the One-Eyed Moose, 207 S. Main St. Gulvezan and a partner, Robby Babcock, owned the Whiffletree Restaurant at 208 W. Huron St. before it burned in 1989. The two have since parted ways.

Gulvezan said Monday that he’d wanted to move the Flame into a building he owns at 207 N. Main St., but “had to change plans.” The 1994-95 Ameritech phone book lists the Flame’s address as 207 N. Main St.

Gulvezan already has started moving booths from the old place into the new and he’s taken down some of the outside neon, which may be used inside the new location. “We’re going to do as much as we can with the neon,” he said.

Bartender Harry Tselios, who’s been with the Flame since April 14, 1953, will be moving with it.

Gulvezan bought the original spot in 1984 from the estate of Harvey Blanchard.

City tax records show James Apostolakis of Toledo as owner of the Flame’s current site. Calls to his home were not returned, but Gulvezan says he’s heard a card shop will replace the bar.

Harry Tselios has been tending bar at The Flame, 115 W. Washington St., since 1953 and will be moving along with establishment to a new location a block away at 112 W. Liberty St. The new bar will be 'smaller but nicer/ says Tselios, and it will keep its current name. Owner Andy Gulvezan said he's moving the bar because the owners of the Washington street building wouldn't renew his lease.