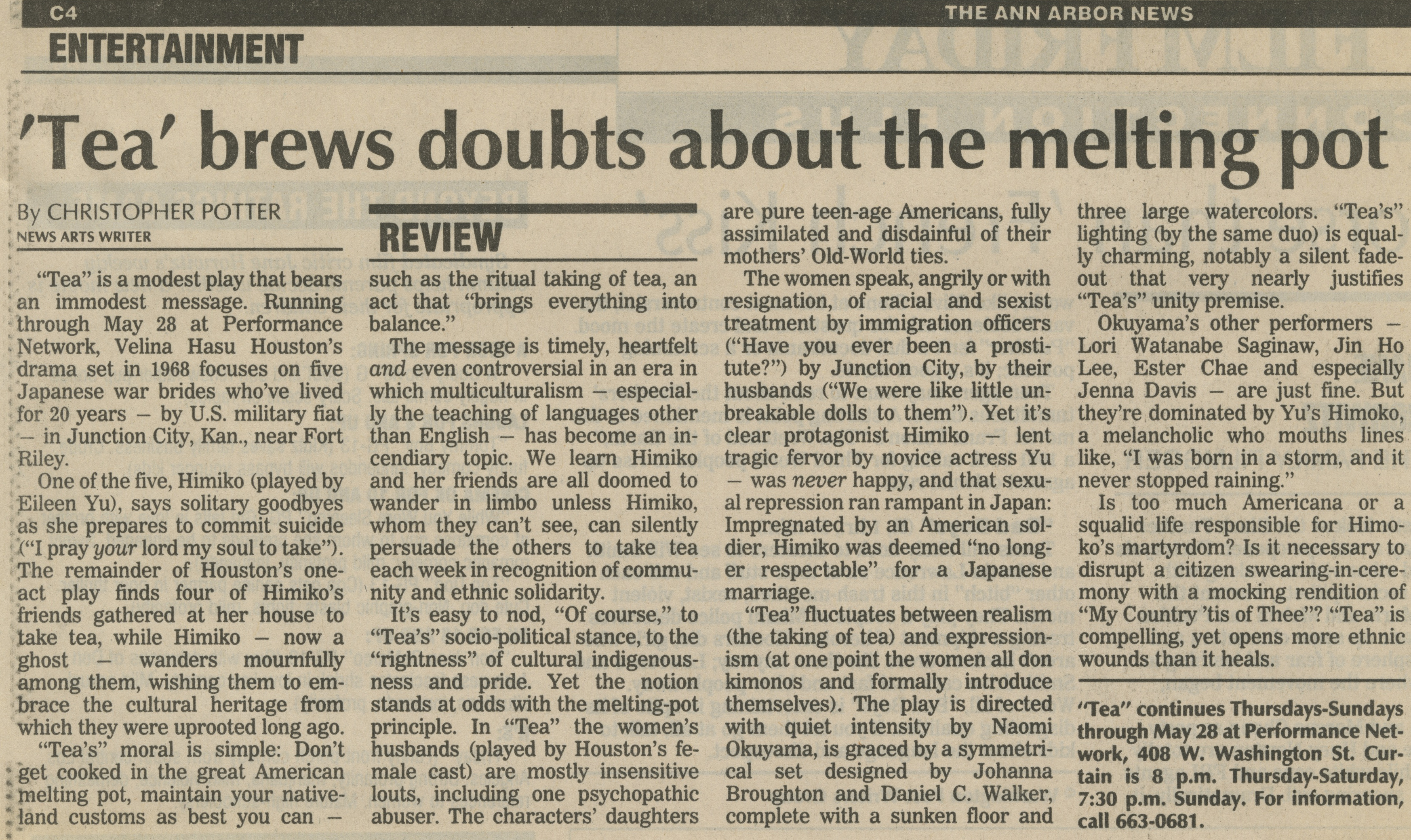 “Tea” is a modest play that bears an immodest message. Running through May 28 at Performance Network, Velina Hasu Houston’s drama set in 1968 focuses on five Japanese war brides who’ve lived for 20 years - by U.S. military fiat - in Junction City, Kan., near Fort ' Riley.

One of the five, Himiko (played by JSileen Yu), says solitary goodbyes as she prepares to commit suicide (“I pray your lord my soul to take”). The remainder of Houston’s one-act play finds four of Himiko’s friends gathered at her house to take tea, while Himiko - now a ghost - wanders mournfully among them, wishing them to embrace the cultural heritage from which they were uprooted long ago.

• get cooked in the great American

• melting pot, maintain your native-I land customs as best you can -

such as the ritual taking of tea, an act that “brings everything into balance.”

The message is timely, heartfelt and even controversial in an era in which multiculturalism - especially the teaching of languages other than English - has become an incendiary topic. We learn Himiko and her friends are all doomed to wander in limbo unless Himiko, whom they can’t see, can silently persuade the others to take tea each week in recognition of community and ethnic solidarity.

It’s easy to nod, “Of course,” to “Tea’s” socio-political stance, to the “rightness” of cultural indigenousness and pride. Yet the notion stands at odds with the melting-pot principle. In “Tea” the women’s husbands (played by Houston’s female cast) are mostly insensitive louts, including one psychopathic abuser. The characters’ daughters

are pure teen-age Americans, fully assimilated and disdainful of their mothers’ Old-World ties.

The women speak, angrily or with resignation, of racial and sexist treatment by immigration officers (“Have you ever been a prostitute?”) by Junction City, by their husbands (“We were like little unbreakable dolls to them”). Yet it’s clear protagonist Himiko - lent tragic fervor by novice actress Yu - was never happy, and that sexual repression ran rampant in Japan: Impregnated by an American soldier, Himiko was deemed “no longer respectable” for a Japanese marriage.

“Tea” fluctuates between realism (the taking of tea) and expressionism (at one point the women all don kimonos and formally introduce themselves). The play is directed with quiet intensity by Naomi Okuyama, is graced by a symmetrical set designed by Johanna Broughton and Daniel C. Walker, complete with a sunken floor and

Okuyama’s other performers -Lori Watanabe Saginaw, Jin Ho Lee, Ester Chae and especially Jenna Davis - are just fine. But they’re dominated by Yu’s Himoko, a melancholic who mouths lines like, “I was born in a storm, and it never stopped raining.”

Is too much Americana or a squalid life responsible for Himo-ko’s martyrdom? Is it necessary to disrupt a citizen swearing-in-cere-mony with a mocking rendition of “My Country ’tis of Thee”? "Tea” is compelling, yet opens more ethnic wounds than it heals.