Tolling Of The Bells: Hiroshima Will Be Remembered Sunday With Bells, Program At Gallup Park 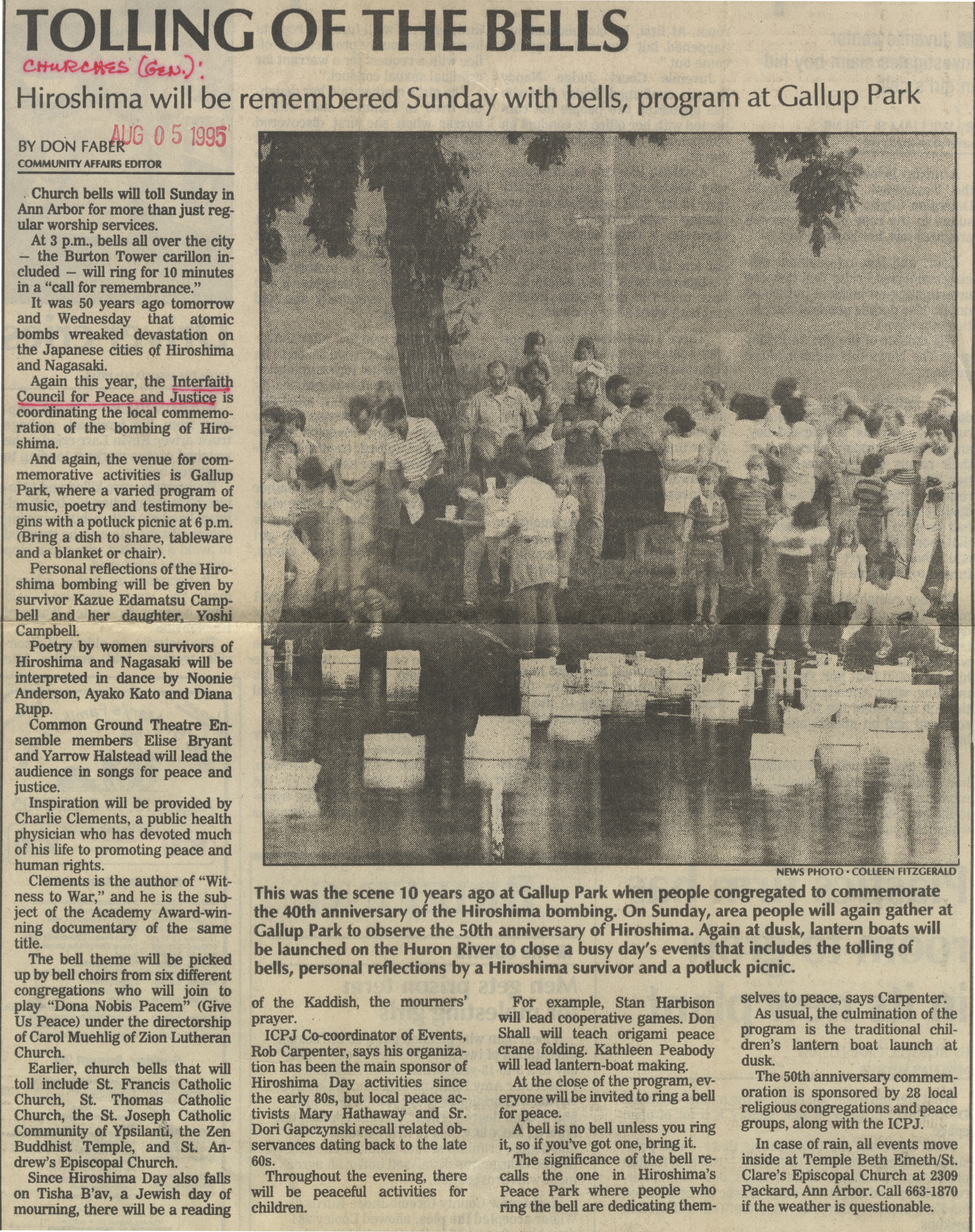 ﻿TOLLING OF THE BELLS

Hiroshima will be remembered Sunday with bells, program at Gallup Park

At 3 p.m., bells all over the city - the Burton Tower carillon included - will ring for 10 minutes in a “call for remembrance.”

It was 50 years ago tomorrow and Wednesday that atomic bombs wreaked devastation on the Japanese cities of Hiroshima and Nagasaki.

Again this year, the Interfaith Council for Peace and Justice is coordinating the local commemoration of the bombing of Hiroshima.

And again, the venue for commemorative activities is Gallup Park, where a varied program of music, poetry and testimony begins with a potluck picnic at 6 p.m. (Bring a dish to share, tableware and a blanket or chair).

Personal reflections of the Hiroshima bombing will be given by survivor Kazue Edamatsu Campbell and her daughter, Yoshi Campbell.

Poetry by women survivors of Hiroshima and Nagasaki will be interpreted in dance by Noonie Anderson, Ayako Kato and Diana Rupp.

Common Ground Theatre Ensemble members Elise Bryant and Yarrow Halstead will lead the audience in songs for peace and justice.

Inspiration will be provided by Charlie Clements, a public health physician who has devoted much of his life to promoting peace and human rights.

Clements is the author of “Witness to War,” and he is the subject of the Academy Award-winning documentary of the same title.

The bell theme will be picked up by bell choirs from six different congregations who will join to play “Dona Nobis Pacem” (Give Us Peace) under the directorship of Carol Muehlig of Zion Lutheran Church.

Since Hiroshima Day also fells on Tisha B’av, a Jewish day of mourning, there will be a reading of the Kaddish, the mourners’ prayer.

ICPJ Co-coordinator of Events, Rob Carpenter, says his organization has been the main sponsor of Hiroshima Day activities since the early 80s, but local peace activists Mary Hathaway and Sr. Don Gapczynski recall related observances dating back to the late 60s.

Throughout the evening, there will be peaceful activities for children.

At the close of the program, everyone will be invited to ring a bell for peace.

A bell is no bell unless you ring it, so if you’ve got one, bring it.

The significance of the bell recalls the one in Hiroshima’s Peace Park where people who ring the bell are dedicating themselves to peace, says Carpenter.

As usual, the culmination of the program is the traditional children’s lantern boat launch at dusk.

The 50th anniversary commemoration is sponsored by 28 local religious congregations and peace groups, along with the ICPJ.

In case of rain, all events move inside at Temple Beth Emeth/St. Clare’s Episcopal Church at 2309 Packard, Ann Arbor. Call 663-1870 if the weather is questionable.

NEWS PHOTO - COLLEEN FITZGERALD
This was the scene 10 years ago at Gallup Park when people congregated to commemorate the 40th anniversary of the Hiroshima bombing. On Sunday, area people will again gather at Gallup Park to observe the 50th anniversary of Hiroshima. Again at dusk, lantern boats will be launched on the Huron River to close a busy day's events that includes the tolling of bells, personal reflections by a Hiroshima survivor and a potluck picnic.