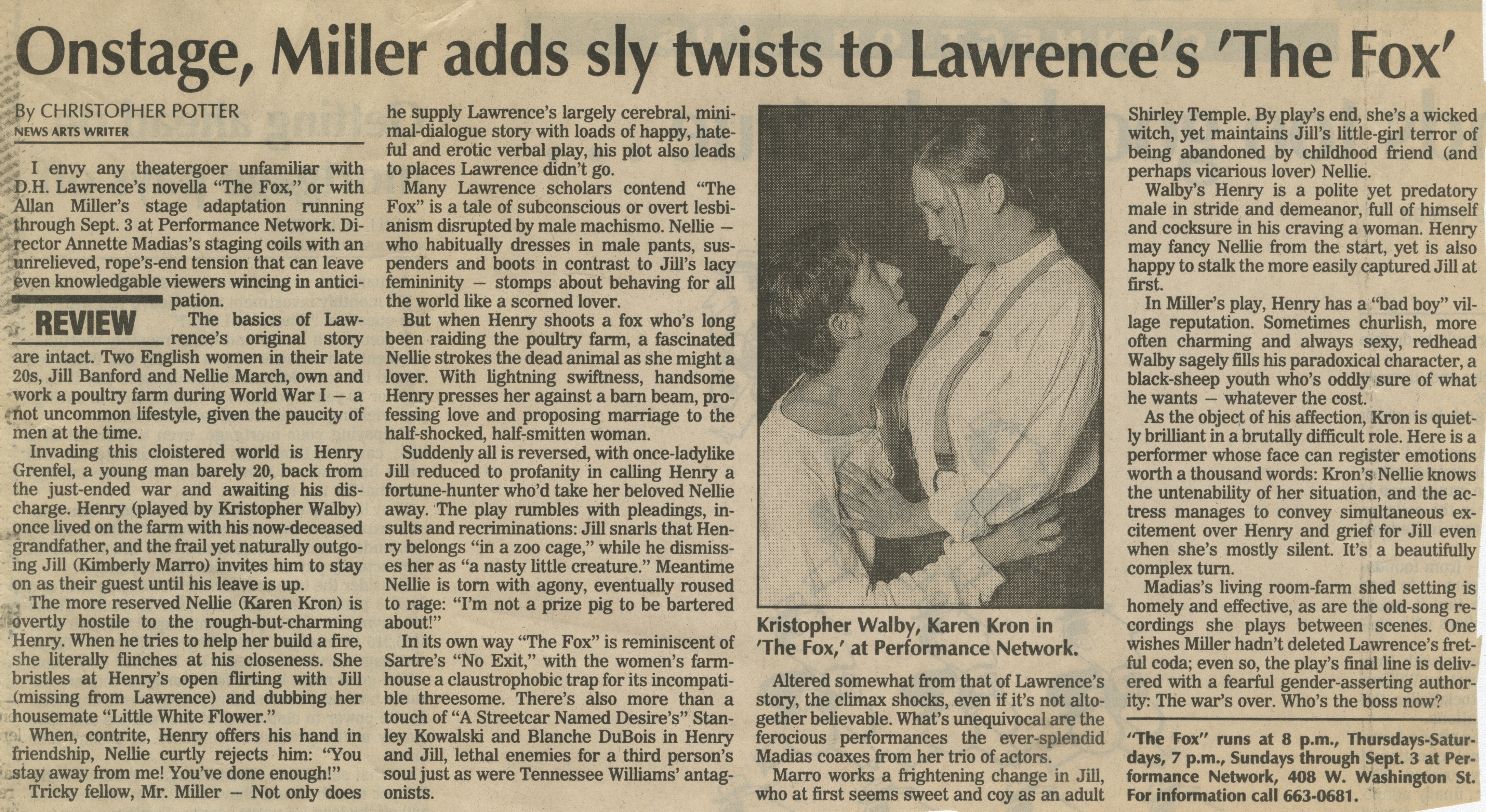 I envy any theatergoer unfamiliar with D.H. Lawrence’s novella “The Fox,” or with Allan Miller’s stage adaptation running through Sept. 3 at Performance Network. Director Annette Madias’s staging coils with an unrelieved, rope’s-end tension that can leave even knowledgable viewers wincing in anticipation.

The basics of Lawrence’s original story are intact. Two English women in their late 20s, Jill Banford and Nellie March, own and work a poultry farm during World War I - a hot uncommon lifestyle, given the paucity of men at the time.

Invading this cloistered world is Henry Grenfel, a young man barely 20, back from the just-ended war and awaiting his discharge. Henry (played by Kristopher Walby) once lived on the farm with his now-deceased grandfather, and the frail yet naturally outgoing Jill (Kimberly Marro) invites him to stay on as their guest until his leave is up.

The more reserved Nellie (Karen Kron) is overtly hostile to the rough-but-charming Henry. When he tries to help her build a fire, she literally flinches at his closeness. She bristles at Henry’s open flirting with Jill (missing from Lawrence) and dubbing her housemate “Little White Flower.”

When, contrite, Henry offers his hand in friendship, Nellie curtly rejects him: “You stay away from me! You’ve done enough!”

Many Lawrence scholars contend “The Fox” is a tale of subconscious or overt lesbianism disrupted by male machismo. Nellie - who habitually dresses in male pants, suspenders and boots in contrast to Jill’s lacy femininity - stomps about behaving for all the world like a scorned lover.

But when Henry shoots a fox who’s long been raiding the poultry farm, a fascinated Nellie strokes the dead animal as she might a lover. With lightning swiftness, handsome Henry presses her against a bam beam, professing love and proposing marriage to the half-shocked, half-smitten woman.

Suddenly all is reversed, with once-ladylike Jill reduced to profanity in calling Henry a fortune-hunter who’d take her beloved Nellie away. The play rumbles with pleadings, insults and recriminations: Jill snarls that Henry belongs “in a zoo cage,” while he dismisses her as “a nasty little creature.” Meantime Nellie is tom with agony, eventually roused to rage: “I’m not a prize pig to be bartered about!”

Altered somewhat from that of Lawrence’s story, the climax shocks, even if it’s not altogether believable. What’s unequivocal are the ferocious performances the ever-splendid Madias coaxes from her trio of actors.

Marro works a frightening change in Jill, who at first seems sweet and coy as an adult Shirley Temple. By play’s end, she’s a wicked witch, yet maintains Jill’s little-girl terror of being abandoned by childhood friend (and perhaps vicarious lover) Nellie.

Walby’s Henry is a polite yet predatory male in stride and demeanor, full of himself and cocksure in his craving a woman. Henry may fancy Nellie from the start, yet is also happy to stalk the more easily captured Jill at first.

In Miller’s play, Henry has a “bad boy” village reputation. Sometimes churlish, more often charming and always sexy, redhead Walby sagely fills his paradoxical character, a black-sheep youth who’s oddly sure of what he wants - whatever the cost.

As the object of his affection, Kron is quietly brilliant in a brutally difficult role. Here is a performer whose face can register emotions worth a thousand words: Kron’s Nellie knows the untenability of her situation, and the actress manages to convey simultaneous excitement over Henry and grief for Jill even when she’s mostly silent. It’s a beautifully complex turn.

Madias’s living room-farm shed setting is homely and effective, as are the old-song recordings she plays between scenes. One wishes Miller hadn’t deleted Lawrence’s fretful coda; even so, the play’s final line is delivered with a fearful gender-asserting authority: The war’s over. Who’s the boss now?

Kristopher Walby, Karen Kron in 'The Fox,' at Performance Network.