A World Of Difference 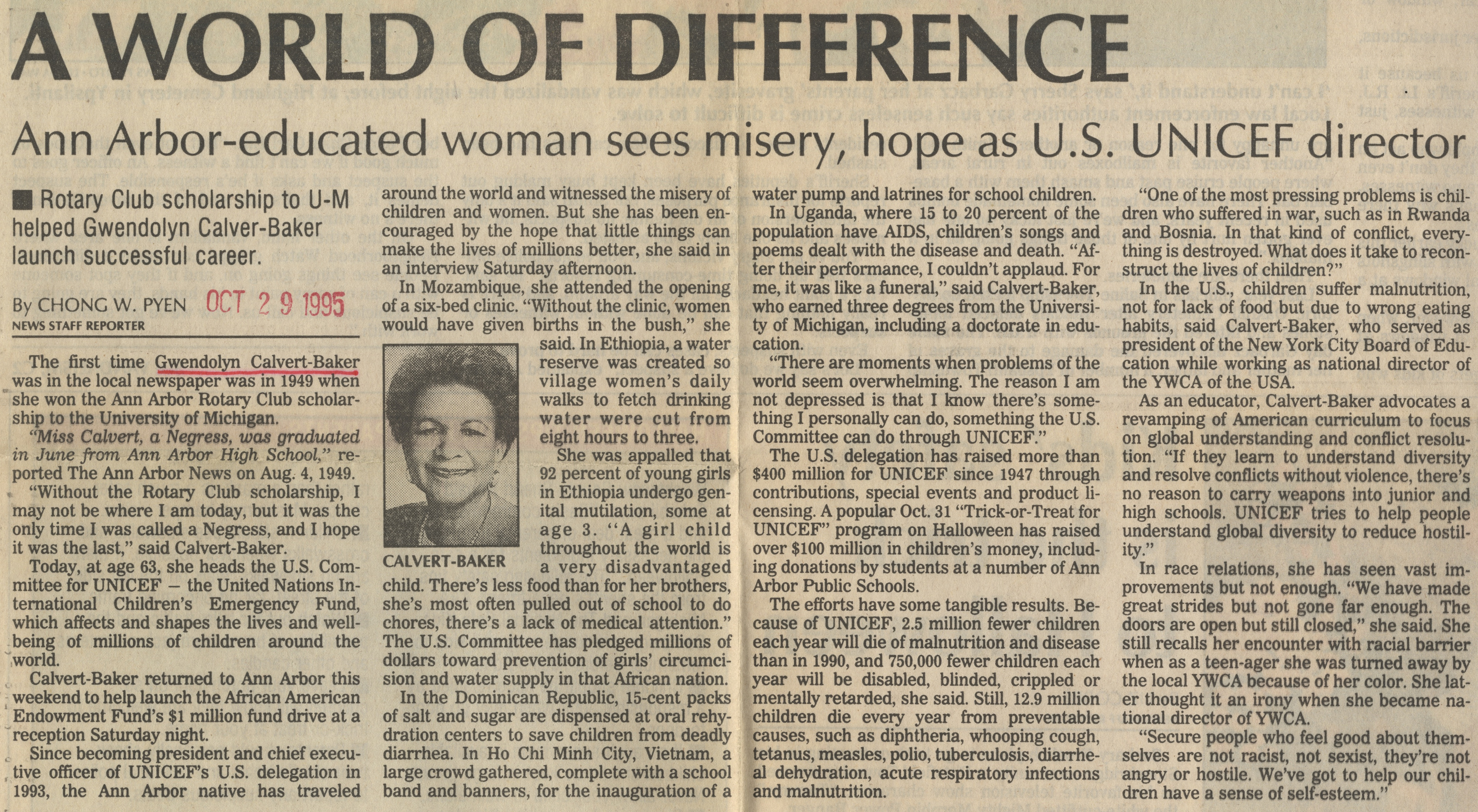 ﻿A WORLD OF DIFFERENCE

The first time Gwendolyn Calvert-Baker was in the local newspaper was in 1949 when she won the Ann Arbor Rotary Club scholarship to the University of Michigan.

“Miss Calvert, a Negress, was graduated in June from Ann Arbor High School,” reported The Ann Arbor News on Aug. 4, 1949.

“Without the Rotary Club scholarship, I may not be where I am today, but it was the only time I was called a Negress, and I hope it was the last,” said Calvert-Baker.

Today, at age 63, she heads the U.S. Committee for UNICEF - the United Nations International Children’s Emergency Fund, which affects and shapes the lives and well-being of millions of children around the world.

Since becoming president and chief executive officer of UNICEF’s U.S. delegation in 1993, the Ann Arbor native has traveled around the world and witnessed the misery of children and women. But she has been encouraged by the hope that little things can make the lives of millions better, she said in an interview Saturday afternoon.

In Mozambique, she attended the opening of a six-bed clinic. “Without the clinic, women would have given births in the bush,” she said. In Ethiopia, a water reserve was created so village women’s daily walks to fetch drinking water were cut from eight hours to three.

She was appalled that 92 percent of young girls in Ethiopia undergo genital mutilation, some at age 3. “A girl child throughout the world is a very disadvantaged child. There’s less food than for her brothers, she’s most often pulled out of school to do chores, there’s a lack of medical attention.” The U.S. Committee has pledged millions of dollars toward prevention of girls’ circumcision and water supply in that African nation.

In the Dominican Republic, 15-cent packs of salt and sugar are dispensed at oral rehydration centers to save children from deadly diarrhea. In Ho Chi Minh City, Vietnam, a large crowd gathered, complete with a school band and banners, for the inauguration of a water pump and latrines for school children.

In Uganda, where 15 to 20 percent of the population have AIDS, children’s songs and poems dealt with the disease and death. “After their performance, I couldn’t applaud. For me, it was like a funeral,” said Calvert-Baker, who earned three degrees from the University of Michigan, including a doctorate in education.

“There are moments when problems of the world seem overwhelming. The reason I am not depressed is that I know there’s something I personally can do, something the U.S. Committee can do through UNICEF.”

The U.S. delegation has raised more than $400 million for UNICEF since 1947 through contributions, special events and product licensing. A popular Oct. 31 “Trick-or-Treat for UNICEF” program on Halloween has raised over $100 million in children’s money, including donations by students at a number of Ann Arbor Public Schools.

The efforts have some tangible results. Because of UNICEF, 2.5 million fewer children each year will die of malnutrition and disease than in 1990, and 750,000 fewer children each year will be disabled, blinded, crippled or mentally retarded, she said. Still, 12.9 million children die every year from preventable causes, such as diphtheria, whooping cough, tetanus, measles, polio, tuberculosis, diarrheal dehydration, acute respiratory infections and malnutrition.

“One of the most pressing problems is children who suffered in war, such as in Rwanda and Bosnia. In that kind of conflict, everything is destroyed. What does it take to reconstruct the lives of children?”

In the U.S., children suffer malnutrition, not for lack of food but due to wrong eating habits, said Calvert-Baker, who served as president of the New York City Board of Education while working as national director of the YWCA of the USA.

As an educator, Calvert-Baker advocates a revamping of American curriculum to focus on global understanding and conflict resolution. “If they learn to understand diversity and resolve conflicts without violence, there’s no reason to carry weapons into junior and high schools. UNICEF tries to help people understand global diversity to reduce hostility.”

In race relations, she has seen vast improvements but not enough. “We have made great strides but not gone far enough. The doors are open but still closed,” she said. She still recalls her encounter with racial barrier when as a teenager she was turned away by the local YWCA because of her color. She later thought it an irony when she became national director of YWCA.

“Secure people who feel good about themselves are not racist, not sexist, they’re not angry or hostile. We’ve got to help our children have a sense of self-esteem.”