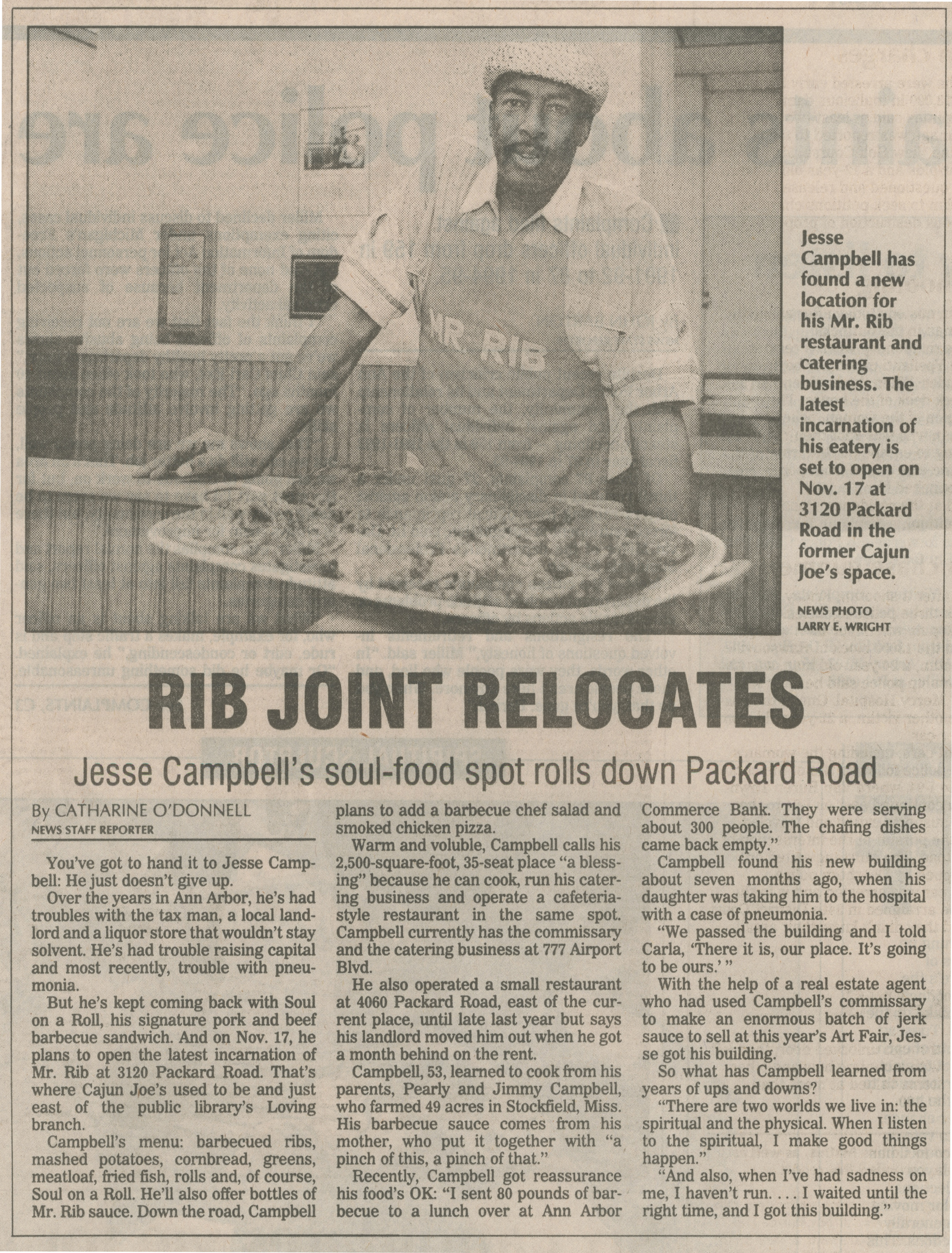 ﻿Jesse Campbell has found a new location for his Mr. Rib restaurant and catering business. The latest incarnation of his eatery is set to open on Nov. 17 at 3120 Packard Road in the former Cajun Joe's space.

You’ve got to hand it to Jesse Campbell: He just doesn’t give up.

Over the years in Ann Arbor, he’s had troubles with the tax man, a local landlord and a liquor store that wouldn’t stay solvent. He’s had trouble raising capital and most recently, trouble with pneumonia.

But he’s kept coming back with Soul on a Roll, his signature pork and beef barbecue sandwich. And on Nov. 17, he plans to open the latest incarnation of Mr. Rib at 3120 Packard Road. That’s where Cajun Joe’s used to be and just east of the public library’s Loving branch.

Warm and voluble, Campbell calls his 2,500-square-foot, 35-seat place “a blessing” because he can cook, run his catering business and operate a cafeteria-style restaurant in the same spot. Campbell currently has the commissary and the catering business at 777 Airport Blvd.

He also operated a small restaurant at 4060 Packard Road, east of the current place, until late last year but says his landlord moved him out when he got a month behind on the rent.

Campbell, 53, learned to cook from his parents, Pearly and Jimmy Campbell, who farmed 49 acres in Stockfield, Miss. His barbecue sauce comes from his mother, who put it together with “a pinch of this, a pinch of that.”

Recently, Campbell got reassurance his food’s OK: “I sent 80 pounds of barbecue to a lunch over at Ann Arbor Commerce Bank. They were serving about 300 people. The chafing dishes came back empty.”

Campbell found his new building about seven months ago, when his daughter was taking him to the hospital with a case of pneumonia.

“We passed the building and I told Carla, ‘There it is, our place. It’s going to be ours.’ ”

With the help of a real estate agent who had used Campbell’s commissary to make an enormous batch of jerk sauce to sell at this year’s Art Fair, Jesse got his building.

So what has Campbell learned from years of ups and downs?

“There are two worlds we live in: the spiritual and the physical. When I listen to the spiritual, I make good things happen.”

“And also, when I’ve had sadness on me, I haven’t run. ... I waited until the right time, and I got this building.”