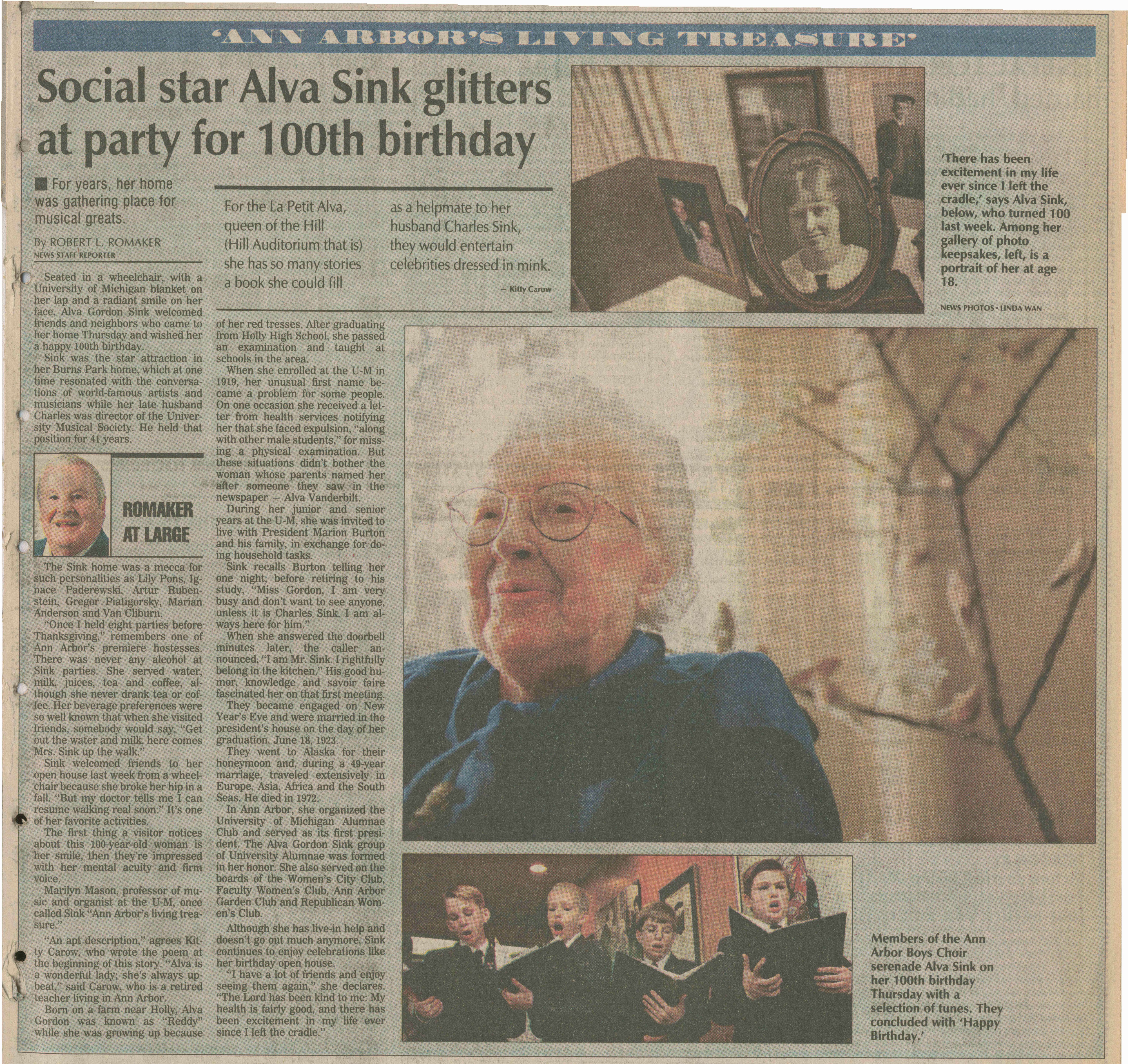 For the La Petit Alva,
Queen of the Hill
(Hill Auditorium that is)
She has so many stories
a book she could fill
as a helpmate to her
husband Charles Sink,
they would entertain
celebrities dressed in mink
-Kitty Carow
[POEM]

Seated in a wheelchair, with a University of Michigan blanket on her lap and a radiant smile on her face, Alva Gordon Sink welcomed friends and neighbors who came to her home Thursday and wished her a happy 100th birthday.
Sink was the star attraction in her Burns Park home, which at one time resonated with the conversations of world-famous artists and musicians while her late husband Charles was director of the University Musical Society. He held that position for 41 years.
The Sink home was a mecca for such personalities as Lily Pons, Ignace Paderewski, Artur Rubenstein, Gregor Piatigorsky, Marian Anderson and Van Cliburn.
“Once I held eight parties before Thanksgiving,” remembers one of Ann Arbor’s premiere hostesses. There was never any alcohol at Sink parties. She served water, milk, juices, tea and coffee, although she never drank tea or coffee. Her beverage preferences were so well known that when she visited friends, somebody would say, “Get out the water and milk, here comes Mrs. Sink up the walk.”
Sink welcomed friends to her open house last week from a wheelchair because she broke her hip in a fall. “But my doctor tells me I can resume walking real soon.” It’s one of her favorite activities.
The first thing a visitor notices about this 100-year-old woman is her smile, then they’re impressed with her mental acuity and firm voice.
Marilyn Mason, professor of music and organist at the U-M, once called Sink “Ann Arbor’s living treasure.”
“An apt description,” agrees Kitty Carow, who wrote the poem at the beginning of this story. “Alva is a wonderful lady; she’s always upbeat,” said Carow, who is a retired teacher living in Ann Arbor.
Born on a farm near Holly, Alva Gordon was known as “Reddy” while she was growing up because of her red tresses. After graduating from Holly High School, she passed an examination and taught at schools in the area.
When she enrolled at the U-M in 1919, her unusual first name became a problem for some people. N one occasion she received a letter from health services notifying her that she faced expulsion, “along with other male students,” for missing a physical examination. But these situations didn’t bother the woman whose parents named her after someone they saw in the newspaper – Alva Vanderbilt.
During her junior and senior years at the U-M, she was invited to live with President Marion Burton and his family, in exchange for doing household tasks.
Sink recalls Burton telling her one night, before retiring to his study, “Miss Gordon, I am very busy and don’t want to see anyone, unless it is Charles Sink. I am always here for him.”
When she answered the doorbell minutes later, the caller announced, “I am Mr. Sink. I rightfully belong in the kitchen.” His good humor, knowledge and savoir faire fascinated her on that first meeting.
They became engaged on New Year’s Eve and were married in the president’s house on the day of her graduation, June 18, 1923.
They went to Alaska for their honeymoon and, during a 49-year marriage, traveled extensively in Europe, Asia, Africa and the South Seas. He died in 1972.
In Ann Arbor, she organized the University of Michigan Alumnae Club and served as its first president. The Alva Gordon Sink group of University Alumnae was formed in her honor. She also served on the boards of the Women’s City Club, Faculty Women’s Club, Ann Arbor Garden Club and Republican Women’s Club.
Although she has live-in help and doesn’t go out much anymore, Sink continues to enjoy celebrations like her birthday open house.
“I have a lot of friends and enjoy seeing them again,” she declares. “The Lord has been kind to me: My health is fairly good, and there has been excitement in my life ever since I left the cradle.”

[Caption #1: ‘There has been excitement in my life ever since I left the cradle,’ says Alva Sink, below, who turned 100 last week. Among her gallery of photo keepsakes, left, is a portrait of her at age 18.
Caption #2: Members of the Ann Arbor Boys Choir serenade Alva Sink on her 100th birthday Thursday with a selection of tunes. They concluded with ‘Happy Birthday.’]