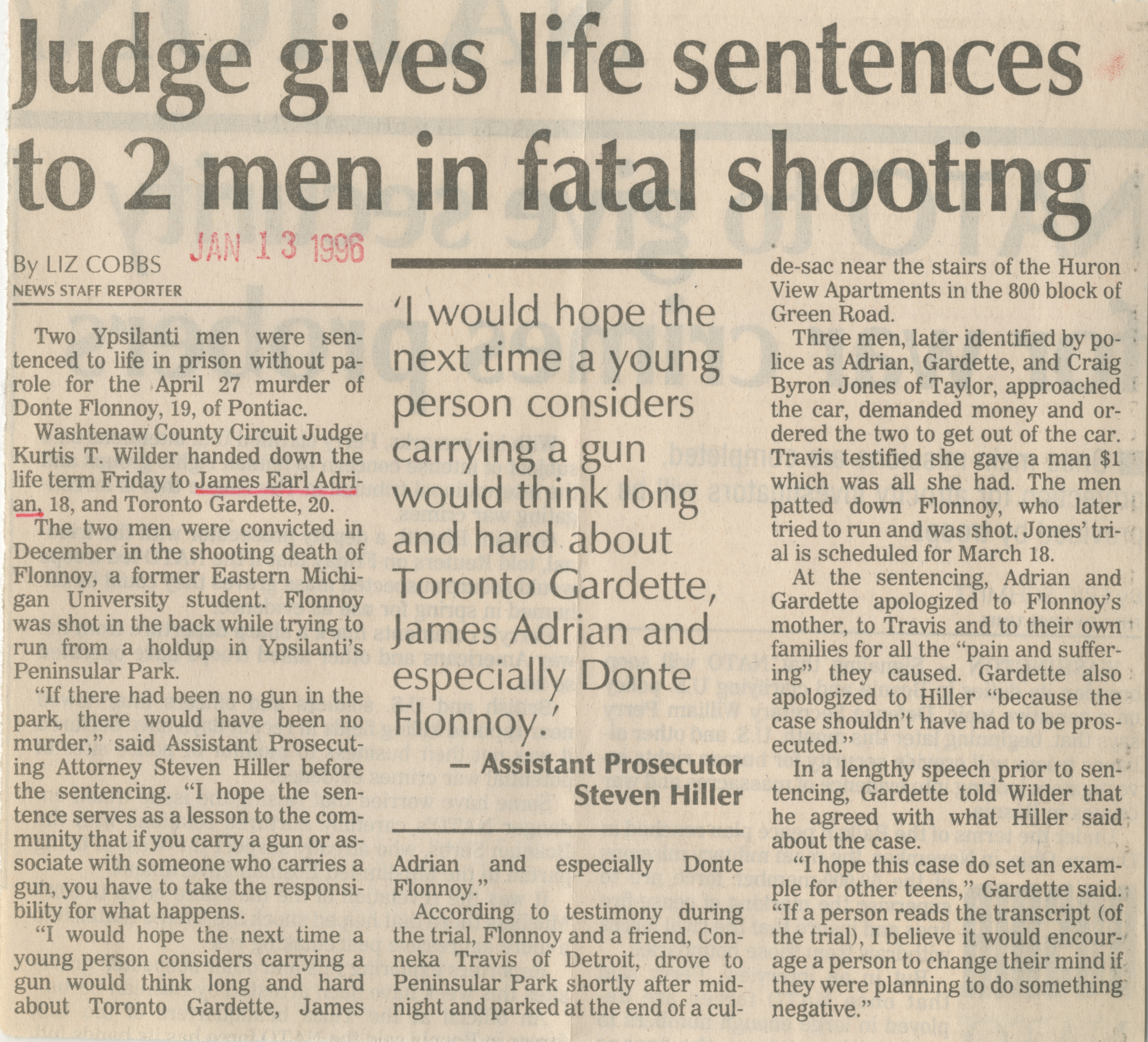 Two Ypsilanti men were sentenced to life in prison without parole for the April 27 murder of Donte Flonnoy, 19, of Pontiac.

The two men were convicted in December in the shooting death of Flonnoy, a former Eastern Michigan University student. Flonnoy was shot in the back while trying to run from a holdup in Ypsilanti’s Peninsular Park.

“If there had been no gun in the park, there would have been no murder,” said Assistant Prosecuting Attorney Steven Hiller before the sentencing. “I hope the sentence serves as a lesson to the community that if you carry a gun or associate with someone who carries a gun, you have to take the responsibility for what happens.

“I would hope the next time a young person considers carrying a gun would think long and hard about Toronto Gardette, James Adrian and especially Donte Flonnoy.”

According to testimony during the trial, Flonnoy and a friend, Conneka Travis of Detroit, drove to Peninsular Park shortly after midnight and parked at the end of a cul-de-sac near the stairs of the Huron View Apartments in the 800 block of Green Road.

Three men, later identified by police as Adrian, Gardette, and Craig Byron Jones of Taylor, approached the car, demanded money and ordered the two to get out of the car. Travis testified she gave a man $1 which was all she had. The men patted down Flonnoy, who later tried to run and was shot. Jones’ trial is scheduled for March 18.

At the sentencing, Adrian and Gardette apologized to Flonnoy’s mother, to Travis and to their own families for all the “pain and suffering” they caused. Gardette also apologized to Hiller “because the case shouldn’t have had to be prosecuted.”

In a lengthy speech prior to sentencing, Gardette told Wilder that he agreed with what Hiller said about the case.

“I hope this case do set an example for other teens,” Gardette said. “If a person reads the transcript (of the trial), I believe it would encourage a person to change their mind if they were planning to do something negative.”

'I would hope the next time a young person considers carrying a gun would think long and hard about Toronto Gardette, James Adrian and especially Donte Flonnoy.'