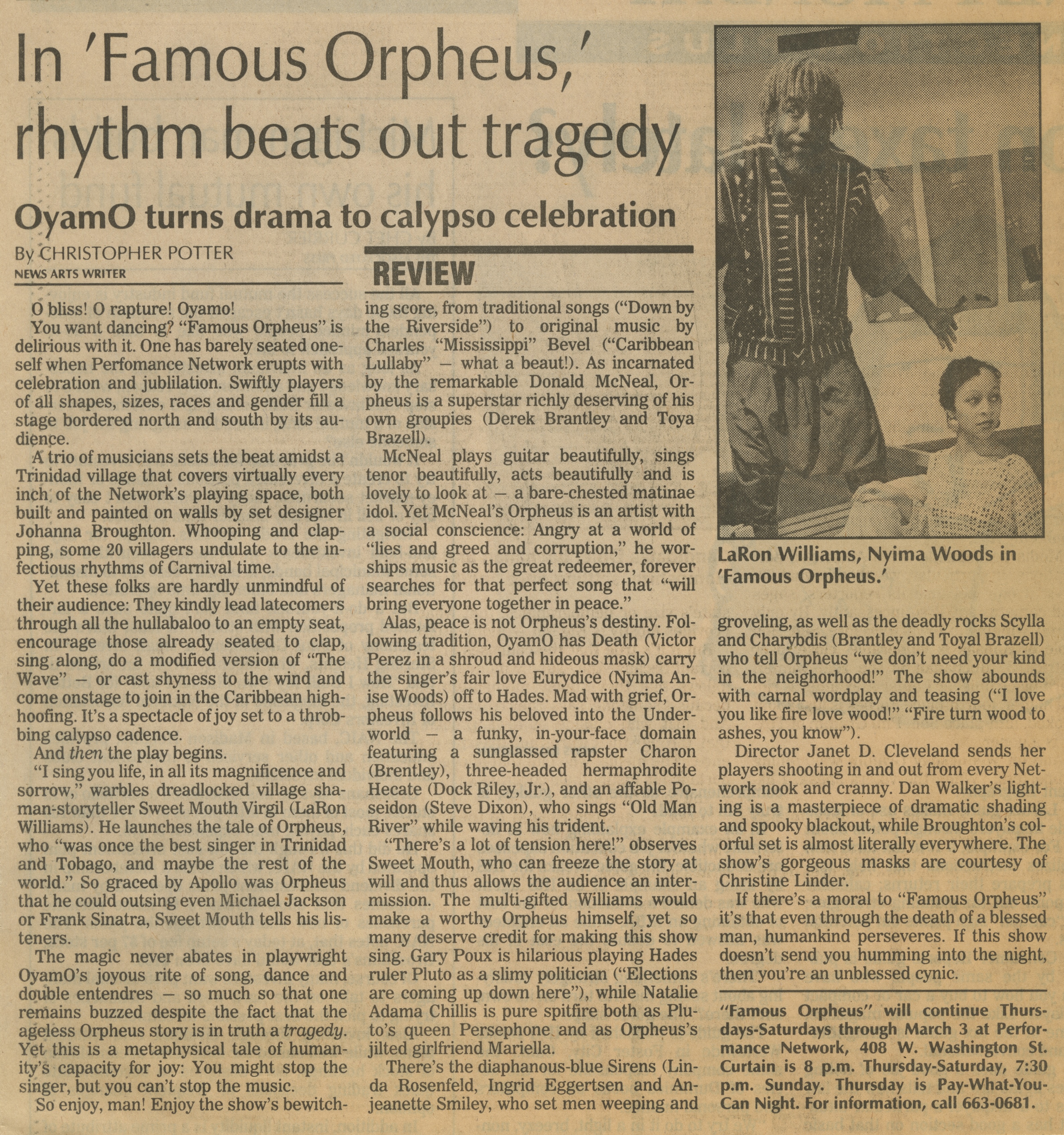 You want dancing? “Famous Orpheus” is delirious with it. One has barely seated oneself when Perfomance Network erupts with celebration and jublilation. Swiftly players of all shapes, sizes, races and gender fill a stage bordered north and south by its audience.

A trio of musicians sets the beat amidst a Trinidad village that covers virtually every inch of the Network’s playing space, both built and painted on walls by set designer Johanna Broughton. Whooping and clapping, some 20 villagers undulate to the infectious rhythms of Carnival time.

Yet these folks are hardly unmindful of their audience: They kindly lead latecomers through all the hullabaloo to an empty seat, encourage those already seated to clap, sing along, do a modified version of “The Wave” - or cast shyness to the wind and come onstage to join in the Caribbean high-hoofing. It’s a spectacle of joy set to a throbbing calypso cadence.

And then the play begins.

“I sing you life, in all its magnificence and sorrow,” warbles dreadlocked village shaman-storyteller Sweet Mouth Virgil (LaRon Williams). He launches the tale of Orpheus, who “was once the best singer in Trinidad and Tobago, and maybe the rest of the world.” So graced by Apollo was Orpheus that he could outsing even Michael Jackson or Frank Sinatra, Sweet Mouth tells his listeners.

The magic never abates in playwright OyamO’s joyous rite of song, dance and double entendres - so much so that one remains buzzed despite the fact that the ageless Orpheus story is in truth a tragedy. Yet this is a metaphysical tale of humanity’s capacity for joy: You might stop the singer, but you can’t stop the music.

So enjoy, man! Enjoy the show’s bewitching score, from traditional songs (“Down by the Riverside”) to original music by Charles “Mississippi” Bevel (“Caribbean Lullaby” - what a beaut!). As incarnated by the remarkable Donald McNeal, Orpheus is a superstar richly deserving of his own groupies (Derek Brantley and Toya Brazell).

McNeal plays guitar beautifully, sings tenor beautifully, acts beautifully and is lovely to look at - a bare-chested matinae idol. Yet McNeal’s Orpheus is an artist with a social conscience: Angry at a world of “lies and greed and corruption,” he worships music as the great redeemer, forever searches for that perfect song that “will bring everyone together in peace.”

“There’s a lot of tension here!” observes Sweet Mouth, who can freeze the story at will and thus allows the audience an intermission. The multi-gifted Williams would make a worthy Orpheus himself, yet so many deserve credit for making this show sing. Gaiy Poux is hilarious playing Hades ruler Pluto as a slimy politician (“Elections are coming up down here”), while Natalie Adama Chillis is pure spitfire both as Pluto’s queen Persephone and as Orpheus’s jilted girlfriend Mariella.

There’s the diaphanous-blue Sirens (Linda Rosenfeld, Ingrid Eggertsen and An-jeanette Smiley, who set men weeping and groveling, as well as the deadly rocks Scylla and Charybdis (Brantley and Toyal Brazell) who tell Orpheus “we don’t need your kind in the neighborhood!” The show abounds with carnal wordplay and teasing (“I love you like fire love wood!” “Fire turn wood to ashes, you know”).

Director Janet D. Cleveland sends her players shooting in and out from every Network nook and cranny. Dan Walker’s lighting is a masterpiece of dramatic shading and spooky blackout, while Broughton’s colorful set is almost literally everywhere. The show’s gorgeous masks are courtesy of Christine Linder.

If there’s a moral to “Famous Orpheus” it’s that even through the death of a blessed man, humankind perseveres. If this show doesn’t send you humming into the night, then you’re an unblessed cynic.